Even in this era of costly crisis and even more expensive rescue, $50 billion is still a lot of money. That sum — perhaps even more — is what Congressional leaders and aides to President-elect Barack Obama say he will propose to build new transit lines, weatherize buildings, manufacture clean next-generation vehicles, and create new “green collar” jobs.

Even more crucial than the scale of the spending on clean energy is what the President-elect says it represents to his overall economic development strategy. Clean energy projects are a crucial piece of an estimated $700 billion to $1 trillion, two-year stimulus plan to put 3 million people back to work, and the first wave of public investment to transform how America powers itself. Remarkably, it now appears that Obama plans to launch his presidency with a daring idea: To anchor the American economy with energy sources not derived from fossil fuels.

Indeed, the incoming president is proposing to take the conventional relationship between the economy and the environment and stand it on its head. Instead of the economy overshadowing and marginalizing environmental concerns, Obama wants to use environmental principles to help drive economic growth.

“A new energy economy is going to be part of what creates the millions of new jobs that we need,” Obama said during a news conference last month. “That’s why my economic recovery plan is going to be focused on how can we make a series of down payments on things we should have done 10, 20, 30 years ago.”

Obama and his energy and environmental team are convinced that a new era of prosperity can be ushered in by weaning America from the way it has powered its economy for nearly two centuries. During the presidential campaign, he vowed to invest $150 billion in clean energy projects over 10 years and create 5 million new “green-collar” jobs. 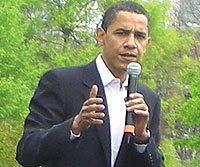 Obama made it clear that this was a top priority, but the ever-deepening economic crisis has only added to the urgency of passing a stimulus program that relies heavily on developing the clean energy and energy efficiency sectors. In recent days, the president-elect and his team have said that their stimulus plan will include $20 billion in clean energy tax credits, a goal of doubling renewable energy production in three years, and the near-term creation of a half-million jobs in the clean energy sector.

Are Americans really prepared to undertake a transition of the magnitude that Obama envisions, especially with gasoline priced at $1.85 a gallon, 55 percent below the peak last July? And will his clean energy transition help produce the employment and prosperity that he claims?

There are strong indications that the answer to the first question is “Yes.” For more than a decade, according to the Center For Transportation Excellence, U.S. voters have approved 70 percent of public referendums that have called for imposing property or sales taxes for new mass transit systems. Before the credit crisis, sales of full-size SUVs had already begun to slip. Major cities have developed new economic development strategies based on reducing pollution, preserving natural resources, and becoming much more energy efficient. Political opposition to building new coal-fired power plants has been steadily growing.

As for the second question, numerous studies conducted by the government, non-profit groups, and universities conclude that the transition to a clean energy economy will produce millions of jobs. Where will they come from?

A major component of Obama’s stimulus package calls for spending $25 billion to make schools and other public buildings far more energy efficient, to construct transit systems, and to rebuild roads and bridges. This infrastructure spending, the new administration estimates, will likely generate 1 million jobs. Economists estimate that programs to improve energy efficiency of homes and businesses would create 100,000 on-site jobs and hundreds of thousands of indirect jobs. Obama’s plan will call for sharply increasing weatherization programs for low-income homeowners, from 140,000 homes a year to 1 million — a move that would expand the number of private sector workers involved in home weatherization programs from roughly 8,000 today to 78,000. He also intends to make 75 percent of federal government buildings more energy-efficient.

In addition, perhaps as part of the stimulus package, the Obama administration plans to spend $10 billion annually to develop biofuels and other forms of renewable energy and to build a modern electrical grid. A decade of such investment, says the transition team, will yield 5 million new green-collar jobs, an estimate supported by studies from the University of Massachusetts, the University of California, and the non-profit Apollo Alliance, a clean energy organization where I work as communications director. These jobs would include everything from skilled trades and crafts, to managers, to maintenance employees. The new president’s plan also calls for aiding manufacturers of clean energy equipment by establishing an advanced manufacturing fund, modeled on a program in Michigan that identifies and invests in innovative clean energy proposals.

Are Americans really prepared to undertake a transition of the magnitude Obama envisions?

Obama proposes a doubling of loan guarantees — to $50 billion — to help the auto industry retool to manufacture next-generation vehicles like the Chevy Volt, the new hybrid plug-in that General Motors hopes to introduce next year. The guarantees also will be made available to manufacturers of lithium-ion batteries and other components for electric vehicles. Such investments will produce tens of thousands of jobs and have the potential to stabilize or even reverse job losses in the auto industry.

Most of these green-collar jobs will require more education than a high school diploma but less than a four-year college degree, and will pay family-supporting wages. That’s huge in a nation in which less than 30 percent of adults earned a college degree. And many of these jobs could be created in Michigan and other industrial states hardest hit by recent losses of manufacturing jobs.

The transition to a renewable energy economy is already proving to be a powerful economic engine. Before the current recession, clean energy was the fastest-growing industrial sector in the United States. Sales of new materials and equipment for the renewable energy sector — steel, gears, wind turbines, solar panels, insulation, software, high tech batteries, gauges, and hundreds of other products — reached $25 billion in the U.S this year, up from less than $10 billion in 2004.

In 2008, according to the American Wind Energy Association, the United States added 7,500 megawatts of generating capacity from wind — equivalent to 8 large coal-fired power plants. Since mid-2007, 41 new wind turbine and component plants opened or expanded, generating 9,000 new jobs. Texas alone this year spent $3 billion on wind generating equipment. Wind is the leading edge of a clean energy industrial sector that, according to various studies, produced 500,000 new green-collar jobs in the U.S. in the past three years.

Still, executives in the oil, coal, and utility industries, and their allies in Congress, are skeptical that a big change in the status quo is coming. Holding off the new clean energy economy would preserve trillions of dollars of investments in coal, oil, and the equipment that runs on both. Expect a huge fight in Washington, especially over how to regulate emissions of greenhouse gases.

Opponents also believe they have history on their side. After all, they note, the last time an American president got this exercised about clean energy was during the oil crisis of the 1970s, when Jimmy Carter deregulated oil and gas prices, created the Department of Energy, prodded utilities to switch from oil to natural gas and coal, increased fuel mileage standards in cars, and spent lavishly on research and development for solar and other alternative sources of energy.

The urgency underlying the new president’s clean energy plan is soaring joblessness and a failing economy that runs on carbon-based fuels.

A leading advocate of this energy transformation is Alan Durning, the 44-year-old founder and director of the Seattle-based Sightline Institute, an environmental and economic think tank. Back in 1999 — when gasoline briefly sold for under $1 a gallon, GM pushed 35,000 SUVs out of showrooms every month, and comedians joked that warming temperatures could be cured by switching from Fahrenheit to Celsius — Durning published a prescient 114-page book about resource conservation and job creation entitled “Green-Collar Jobs.”

In his book, which coined the term that became famous years later, Durning espoused an idea that is now part of the official conversation in Washington.

“A sustainable economy can generate employment just as well as an unsustainable one,” Durning wrote. “For every declining industry, like those that log old-growth forests, make farm chemicals, and build roads, there is an emerging one to take up the slack, like those that advise organic farmers, build windmills, and design walkable neighborhoods. A sustainable economy could be full of opportunity, and not only in these overtly green sectors.”