In January 2007, an independent geologist named Yong Yang set out from his home in China’s western Sichuan Province with a small team of researchers packed into two SUVs to find the unmarked place on the Tibetan plateau from which the Yangtze River springs. They drove over 16,000 miles through China’s still-wild western frontier — vast hinterlands where no roads cross, with mountainous terrain known only to local herders, antelope and wolves.

Yong is a bit of an outdoors adventure junkie (he was previously among the first kayakers to navigate the treacherous upper reaches of the Yangtze), but on this trip his mission was more profound: to investigate the geological and hydrological conditions of the Yangtze River basin — and to evaluate whether a colossal three-part water-diversion project planned by the government, called the “South-to-North Water Transfer Project,” could live up to its incredible billing.

The aim is to alleviate water shortages in parched northern China. But critics, both inside and outside the government, worry that it will be a giant boondoggle — wasting billions of dollars, forcing the relocation of thousands of people, and causing irreparable damage to unique and fragile ecosystems.

China is facing severe water shortages. Both Chinese and Western experts predict that in the next 15 years, China’s shortage of clean water will create up to 30 million “environmental refugees.”

This problem is particularly acute in northern China, where climate and geology have always made water a limited resource. No one seriously disputes that bold steps must be taken to forestall a crisis. But the question is whether Beijing’s ambition — to build a $62 billion series of canals to divert water from the Yangtze River in the south to the Yellow River in the north — will actually work.

Yong’s research has focused on the western leg, which is perhaps the most controversial. When I first met him in his offices in Sichuan in the spring of 2007, he had just returned from his midwinter expedition. The 49-year-old geologist, wearing a dark sweater and black jacket, looked thin and worn, as you might expect from someone who had just survived for two months on canned foods, occasional fresh-killed meat, and cigarettes. When I saw him again that October, for an update on his research, his cheeks were rosier and rounder. In a Beijing hotel room we huddled over his laptop to examine spreadsheets of data compiled from his trip.

Based on his research, he believes the government’s blueprints for the western leg of the water-diversion project are based on inaccurate estimates of the volume of water in the upper Yangtze. If the diversion plan fails, the consequences of faulty engineering could be disastrous for downstream communities, including Shanghai, that depend on the Yangtze for agriculture, industry, and hydropower. Reduced river flow could shutter downstream hydropower stations, inflicting blackouts on millions.

The Chinese government has in the past unleashed disastrous plans with the best of intentions. Mao Zedong’s Great Leap Forward, for instance, set targets for enhanced steel and grain production based on fantasy, rather than science. 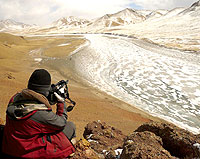 Dr. Yang Yong shoots video of the
Yangtze River in the winter of 2007. LIU YAN

Unable to meet unrealistic goals, local cadres felt compelled to fudge performance numbers, ensuring that inaccurate data and corruption would doom the effort. More recently, the government’s Three Gorges Dam hydropower project — an attempt to address the country’s rapidly growing energy needs that was completed this fall — has run into trouble. Even government officials acknowledged, after the fact, that faulty geological planning along the dam’s route had caused massive landslides and created the potential for an “environmental catastrophe.”

In recent years, a small but growing number of Chinese scientists, including former government scientists such as Yong, have joined the country’s fledgling environmental movement — not for ideological reasons, but because they worry about how decisions regarding environmental challenges, such as water shortages, are being made.

Another concerned scientist is Dr. Yu Xiaogang, a prominent Chinese environmentalist and winner of the prestigious international “Goldman Environmental Prize” in 2006. He began his career in a government ministry in Yunnan province, but became frustrated with the way science was conducted within his bureau. “I find that inside the system, you can do only so-called ‘decision-making supporting research,’” he told me. “That means the government has already made the decision. You do research to support the decision. You never do something that changes the decision.”

For his part, Yong told me his goal now is better public policy. “I am not against the government,” he says. “What I want is to get the facts.”

Yong learned his rugged respect for the outdoors — a mix of awe and trepidation — from his father, a Red Army officer who had been posted in western China. Yong studied geology at the China Mining Industry University, then went to work for the Ministry of Coal’s mining bureau, where he did research to assess geological and environmental risks. At one point, Yong tried to caution that a plan to ship coal down a river on barges was untenable because massive erosion had made the surrounding hillsides prone to landslides. But his superiors didn’t want to hear the bad news.

Yong later explained to me how science was conducted within his bureau. “The government, they will make a goal. Then their researchers think their job is just to say it works. Everybody will just say the good word, and try to find data to support it,” he said. “It’s not a very scientific way of doing research.”

What prompted Yong to think about conducting research independently was his participation in a series of boat trips down the Yangtze River in 1986, in conjunction with teams of international scientists and environmentalists.

I am not against the government,’ says Yong. ‘What I want is to get the facts.’

The “adventure,” as he calls it, steeled his nerves (before his team’s trip, five people had died trying to navigate the same course), reinforced his regard for nature’s splendor and danger, and introduced him to the international scientific community and global environmental literature. Soon after, he quit his government job to work full-time as an independent geologist, focusing on environmental risk assessment and collaborating with international organizations including Arizona State University and the UK Great Nature Society.

His scientific research has spanned many regions of China, but always Yong has returned to the Yangtze. On his recent winter expedition, Yong’s team traced every bend in the western reaches of the river. The previous summer they had traveled roughly the same route, so they could compare water levels in different seasons. On both trips they collected data on rainfall, geology, receding glaciers, and other trends that affect the volume of water in the river.

Based on his analysis of the available data — from his own research, and from 30 years’ worth of reports from hydrology monitoring stations — Yong believes that the planned western route of the South-to-North Water Transfer Project won’t work. Through friends who still work for the government, he obtained copies of two official government plans for the project. These blueprints, he says, are based upon data he calls “completely unreasonable.” 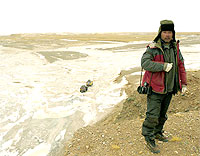 Yong Yang and his researchers tracked nearly every bend of the Yangtze River. LIU YAN

As Yong explained, along this section of the upper Yangtze, the government’s plans call for diverting between 8 and 9 billion cubic meters of water north each year. However, his research indicates that the average annual water flow for that section of the river includes a low estimate of 7 billion cubic meters per year. This would mean that when the river flow is low, the government would be hoping to divert an amount of water greater than the total annual volume in the river.

Yong is surely not alone in doubting the feasibility of the final section of the water-diversion project. More than 50 scientists in Sichuan contributed to a 2006 book, South-to-North Water Transfer Project Western Route Memorandums. The collection of scientific articles and reports raises serious concerns about construction at high altitudes, seismic stability, pollution in the Yangtze, climate change (the river’s volume is expected to diminish as Tibet’s glaciers melt), and the potential for reduced river flow to shutter hundreds of downstream hydropower stations.

No matter whose figures are correct, what worries Yong most is that there is no open, independent system in place to determine whether such a colossal and disruptive undertaking will work. For now, discussion of the project, handled by the government’s Yellow River Conservancy Commission, continues to take place behind closed doors. Last year, Yong tried to open a channel of communication to ask how officials had arrived at their figures, but the commission’s staffers refused to respond. “They just emphasize that there won’t be much problem,” he said.

What worries Yong most is that there is no independent system to determine whether such a colossal undertaking will work.

With its authoritarian government, China has both advantages and disadvantages in confronting its massive environmental challenges. “On the one hand, ambitious projects can be more quickly implemented, and when they work, can do so on an astonishing scale,” says Dr. Zhao Jianping, sector coordinator for energy in the World Bank’s China Office. “On the other hand, there’s no system of checks and balances. So if you make a mistake, it might not become apparent for several years, after which it’s very difficult to change course and avert disastrous consequences.”

For now, Yong is reaching out to environmentalists like Yu and others whom he hopes can help transmit his concerns to the authorities. Whether or not independent scientists, or even government scientists who question official plans, will be permitted to have any influence over future public policy remains to be seen. As Yong says, “Science is the most damning kind of criticism.”