Five years ago, flanked by auto industry executives at a Washington, D.C. auto show, President Obama announced a historic agreement to increase fuel economy and reduce greenhouse gas emissions for cars and light-duty trucks. “By 2025,” the President said, “the average fuel economy of their vehicles will nearly double to almost 55 miles per gallon.” The White House predicted the new rules would save car buyers about $1.7 trillion at the pump and eliminate about 6 billion metric tons of greenhouse gas emissions over the life of the program. That’s more than a year’s worth of U.S. emissions of carbon dioxide. 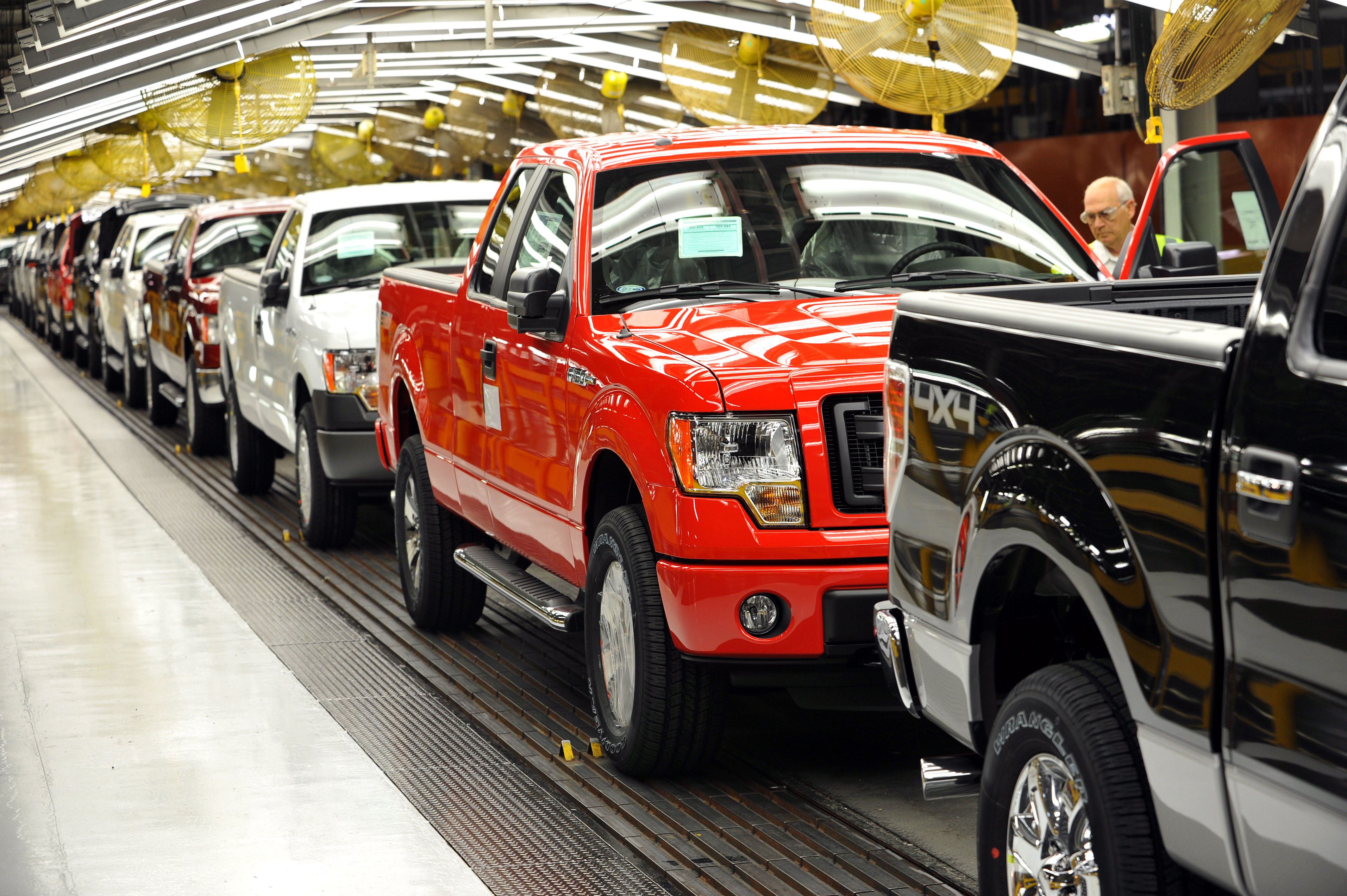 If only it were so simple. But nothing is simple about the government’s sweeping attempt to curb climate emissions and oil imports by requiring auto companies to sell cars that are cleaner and more efficient.

Start with that frequently quoted 54.5 mile-per-gallon projection, which is not even close to the miles-per-gallon estimates pasted on the windows of new cars in dealer showrooms today, let alone the fuel economy that drivers would experience on the road in 2025. The government’s calculations take into account a dizzying array of adjustments and credits, for everything from electric cars, flex-fuel vehicles, energy-efficient air conditioning, and rooftop solar panels. Automakers also get credits for outperforming the standards in the years before they took effect in 2012. These credits can be banked and traded by the automakers — and they are, creating a market worth hundreds of millions of dollars. (Tesla has made more money selling credits than selling cars.) Finally, the estimates for each car rely on indoor tests that don’t accurately model real-world driving.

The result is that the 54.5-mile projection is the equivalent of about 37 to 40 mpg on the sticker, experts say.

Then there’s the issue of gasoline prices. Cars and light trucks are becoming more efficient under the standards, just as they are supposed to. But because gasoline prices have fallen by nearly 50 percent since the standards were set, gains in fuel efficiency are unlikely to generate the $1.7 trillion in savings that the White House predicted (and that is still being promised.) Cheap gas will also make it hard to achieve fleet-wide efficiency and climate reductions because sales of trucks and SUVs are surging.

“We’re not really on a path to 54.5 if we maintain the fleet mix of today,” says Dave Cooke, a senior vehicles analyst for the Union of Concerned Scientists.

The 54.5 mile projection is the equivalent of about 37 to 40 mpg on the sticker, experts say.

Perhaps most importantly, the rules will be reviewed during what is sure to be a fractious mid-term evaluation that begins in June and won’t conclude until April 2018, long after the next president can influence the policy, for better or worse.

All this means that the fuel efficiency standards — which environmentalist Daniel Becker of the Safe Climate Campaign calls “the biggest single step any nation has taken to fight global warming” — may not deliver on their promise. At stake is nothing less than President Obama’s climate change legacy, which rests on the twin pillars of the fuel economy rules and the Clean Power Plan, which limits power plant emissions, but has been put on hold by a federal court.

The U.S. Environmental Protection Agency (EPA) says the fuel economy rules are delivering cleaner and more efficient cars, as promised. “We are seeing fuel-efficient technologies enter the market at a more rapid pace than anyone anticipated,” Janet McCabe, who oversees the EPA’s fuel-efficiency efforts, said recently. Manufacturers have deployed lighter materials, turbocharged engines, better transmissions, smaller engines, and aerodynamic designs. Cooke, of the Union of Concerned Scientists, says: “Car by car, truck by truck, are we on the trajectory we thought we would be? Actually, manufacturers are ahead of the curve.”

But — and this is key — those improvements may still fall significantly short of the Obama administration’s projections. Understanding why requires a closer look at the intricacies of the Corporate Average Fuel Economy standards, known as CAFE.

The standards consist of two sets of parallel rules, with the EPA regulating greenhouse gas emissions per mile and the National Highway Traffic Safety Administration, or NHTSA, administering the fuel economy standards. In a departure from previous CAFE regimes, which date back to 1975, the EPA and NHTSA base today’s standards on a vehicle’s footprint, defined as the area between the wheels. Cars with a smaller footprint must meet tighter standards than larger ones, and light-duty trucks have less stringent standards than cars. Importantly, the average fleet-wide targets for each manufacturer are based on the size and mix of vehicles sold. 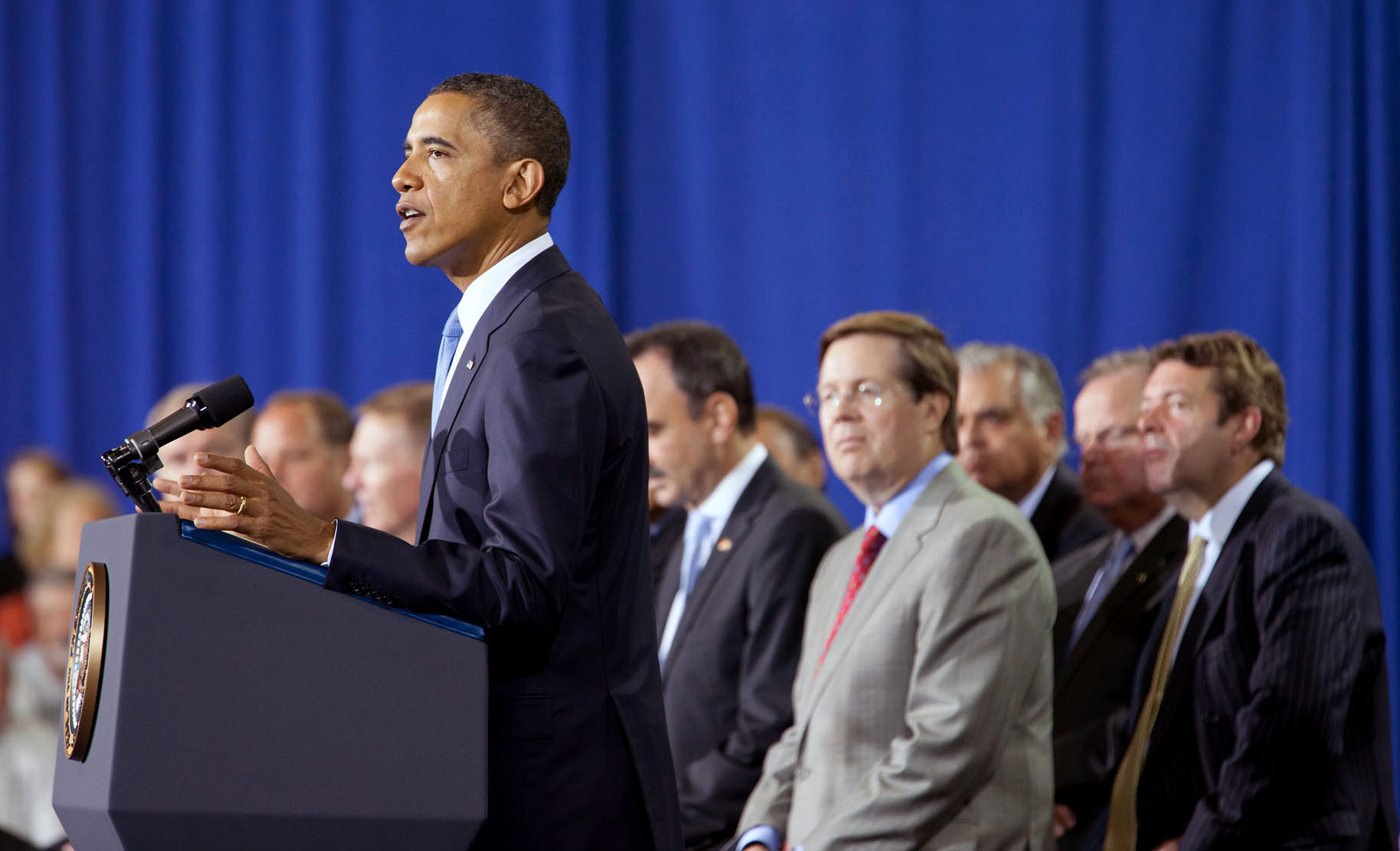 Nationally, the average fuel economy for all cars and light trucks sold in the 2014 model year was 24.3 mpg, according to EPA, using the mileage estimates that appear on new-car stickers. But for CAFE purposes, the average for 2014 was about 31 miles per gallon after all the regulatory credits and adjustments are taken into account.

The good news: That 24.3-mpg average is the highest level ever recorded, up by about 26 percent since 2004. The not-so-good news: It’s unchanged from the 2013 model year.

That’s almost surely because gasoline prices began their steep decline midway through 2014. Since then, predictably, buying patterns have gradually shifted away from small cars, hybrids, and electric vehicles and toward SUVs and light trucks. This has halted or slowed down fleet-wide progress even as individual cars have become more efficient.

While sales of hybrids, plug-in hybrids, and fully electric vehicles are growing, they still represent a mere fraction of all car and truck sales — about 3 percent, according to the Alliance of Automobile Manufacturers, an industry group. If you doubt that Americans like their vehicles super-sized, consider this: Dealers offer more than 75 models of hybrid-electrics and plug-in electrics, but their combined sales last year (492,683) were less than the sales (726,246) of the best-selling Ford-150 series pickup truck, the alliance says.

Those Ford-150 pickups — which, remarkably, have been America’s top-selling vehicle since the Reagan administration — illustrate the challenge of meeting the economy-wide emissions and fuel-economy goals. Their fuel economy ranges from 17 mpg for the four-wheel, 5.0-cylinder V-8 model to 22 mpg for a rear-wheel, 2.7-liter V-6 engine with what Ford calls EcoBoost technology. Last year, Ford began making the F-150 trucks out of aluminum, saving about 700 pounds of vehicle weight and improving fuel efficiency by 5 to 29 percent. The trouble is, sales of trucks like the F-150, Chevy Silverado, and GMC Sierra are growing faster than sales of cars, so progress toward a more efficient and less emitting fleet has stalled.

The CAFE standards ‘could be a whole lot better if you closed the loopholes,’ says one expert.

But another reason, says Becker of the Safe Climate Campaign, is the $15 billion that the auto industry poured into advertising last year, most of it for profit-generating trucks, SUVs, and minivans. “Ads for gas guzzlers are ubiquitous on the web, in print, and on television,” Becker says. “They sell sex, they sell emotion, they sell personal freedom. They have enormous power to shape the market.”

Becker has toiled in the weeds of the fuel-efficiency rules since 1989, when he went to work on climate issues for the Sierra Club. He says, “CAFE could be great. It’s pretty good. It could be a whole lot better if you closed the loopholes.”

One example: When carmakers sell so-called flex-fuel vehicles that are built to run on either gasoline or E85, a fuel that contains 85 percent ethanol, they earn credits that help them comply with the rules. But only about two percent of gas stations in the U.S. sell E85. So most flex-fuel cars run on gasoline, generating no climate benefits.

Another example is that CAFE treats electric cars as if they generate zero emissions and get 150 to 300 miles per gallon. But the electricity they use isn’t carbon-free, particularly if they operate in regions that rely heavily on coal-fired power plants.

Moreover, electric car credits, like all credits, are bankable and tradable. The automakers buy or sell credits to one another, reporting the transactions (but not the prices of credits) to regulators. Tesla, Nissan, Honda, and Toyota build plenty of efficient cars, generating extra credits they can sell. Chrysler, Mercedes-Benz, and Ferrari have been buyers.

This has been a boon to electric-car makers, notably Tesla, which makes more money selling regulatory credits — $622 million, between 2011 and 2015 — than it does by selling cars. (Tesla’s revenues from regulatory credits include credits from Zero Emission Vehicle regulations set in California and adopted by nine other states.) Tesla realized about $13,000 in federal and state credit revenue for each car it sold in 2014 and about $6,600 for each car it sold in 2015.

Chrysler has been Tesla’s biggest customer. At first glance, it may seem peculiar to have Chrysler buyers subsidize the purchases of Tesla’s $100,000 luxury cars, but that’s the way CAFE is designed to work, according to Benjamin Leard, an economist at Resources for the Future, a Washington, D.C. think thank. The idea is to penalize companies that sell less-efficient cars, reward innovation, and reduce the cost of cleaner, more efficient cars. The trades also help companies that fail to meet CAFE standards avoid potentially stiff penalties, experts say.

Becker worries that the trades and credits allow the car companies to game the system by, for example, claiming credits for things like tinted windows that don’t deliver the promised carbon benefits. “They are violating the spirit of the law,” he says. “They are emitting more than they should be.”

So far, the climate benefits of CAFE have been trivial. Between 2012 and 2014, the rules saved 60 million metric tons of CO2, or 1 percent of the 6 billion goal. But the benefits of the rules accrue over time as the fuel efficiency and emissions requirements for each make and model become more stringent. The standards require fuel consumption and emissions to fall by about 50 percent of 2012 levels by 2025.

When mid-term review of CAFE begins this summer, the industry is expected to seek credits for safety improvements, such as autonomous braking, which, in theory, will prevent accidents, reduce congestion, and thus save energy and emissions.

Environmentalists want tougher rules. Becker has suggested that the automakers be required to produce a fleet that will cut carbon emissions by 6 billion tons, the administration’s original projection.

Low gasoline prices and continuing performance issues have slowed the growth of electric car sales. But that has not stymied progress in electrifying larger vehicles, including garbage trucks, city buses, and medium-sized trucks used by freight giants like FedEx. READ MORE

He says the automakers could install available technology such as variable transmissions and turbochargers more widely across their fleets, and make more strenuous efforts to sell smaller cars.

Wouldn’t it be simpler to impose a price on carbon or raise the gasoline tax? That would create incentives for consumers to buy more efficient cars, drive less, and perhaps even — gasp! — walk, bike, or take public transport instead of getting behind the wheel. By contrast, CAFE doesn’t account for the so-called rebound effect, the likelihood that some efficiency gains are offset by more usage. If cars get 40 miles per gallon, the theory goes, people drive more.

Leard, the economist, says: “Having either a carbon tax or gasoline tax would be preferable to CAFE.” Others agree. But the likelihood of this Congress or the next one raising taxes or imposing new ones is slim. The federal gas tax, which stands at 18.4 cents a gallon, was last raised in 1993.

For now, like it or not, CAFE is all we’ve got.