Haze hangs over Taihu on an early summer day. The northern edge of China’s third largest freshwater lake by now should be choked with green slime. Instead, recent downpours have disrupted algal growth. Like a cancer patient in remission, Taihu is enjoying a brief respite from its illness, a flashback to a time before industrial effluents, agricultural runoff, and sewage knocked its ecology out of balance.

This blush of health won’t last. Once temperatures climb here in eastern China’s muggy Jiangsu Province, a nasty blue-green alga will bloom. The cyanobacterium, Microcystis aeruginosa, produces toxins that can damage the liver, intestines, and nervous system. In May 2007, a massive Microcystis bloom overwhelmed a waterworks that supplies Wuxi city on Taihu’s northern shore, leaving more than 2 million people without drinking water for a week. 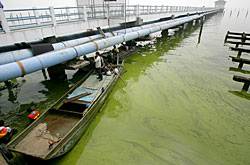 The notorious episode transformed Taihu into a poster child for the environmental consequences of China’s rapid economic growth.Â “There are more and more conflicts in China over environmental problems,” says Zhu Guangwei, a biochemist at Nanjing Institute of Geography and Limnology of the Chinese Academy of Sciences (NIGLAS), which operates a research station at Taihu. Knowing that water shortages could potentially spark violent protests, government officials vowed to clean up Taihu’s mess.

Four years later, a campaign to restore Taihu is showing results. To cut down on pollution and the massive influx of nitrogen and phosphorous—to algae, the equivalent of raw meat to piranhas—authorities forced hundreds of small chemical and manufacturing plants near Taihu to close or relocate to northern Jiangsu. They also instituted strict monitoring of effluents from those factories permitted to stay. The province has erected sewage treatment facilities on Taihu’s tributaries and is dredging tributary mouths to remove nutrient-rich sediments. As a result, nutrient concentrations in the lake’s water column are beginning to taper off. “Water quality is no longer deteriorating,” says NIGLAS ecologist Qin Boqiang.

Restoring Taihu to a truly healthy state, however, will be a steeper challenge. Money is not an issue:

Success at Taihu could have a global payoff, as cyanobacterial blooms are increasing throughout the world.

The central government, through its Ministry of Environmental Protection, plans to allot $155 million over the next 5 years to clean up Taihu. The ministry is now drafting a work plan. But the challenge, says Qin, will be to pinpoint sources of nitrogen and phosphorous to better stem their flow into the lake.

Success at Taihu could have a global payoff. Cyanobacterial blooms are increasing worldwide, notes Hans Paerl, a marine biologist at University of North Carolina, Chapel Hill, who conducts research at Taihu. From Lake Erie and Lake Okeechobee in the United States to Lake Victoria in Africa and Japan’s largest lakes, Biwa and Kasimagaura, algal blooms are a serious threat to drinking water supplies and the ecological and economic sustainability of large freshwater ecosystems, Paerl says. “Taihu serves as a looking glass for these other lakes,” he says. In the United States alone, harmful cyanobacterial blooms inflict about $2 billion a year in losses from water unfit for recreation, drinking, or agriculture, according to Paerl.

Taihu today is a far cry from the idyllic nature spot of the 1980s hit song “Taihu Beauty,” which extolled its “white sails above the water, green reeds along the water, fish and shrimp below the water.” Algal blooms rarely struck back then. But the shallow lake—its deepest spot is only 3 meters—is prone to eutrophication, or nutrient buildup. Starting in the 1980s, Taihu’s ecosystem began to shift from one dominated by diatoms, a benign kind of phytoplankton, to one in which cyanobacteria reign supreme. By the late 1990s Microcystis blooms were a regular summer phenomenon.

Alarmed for good reason, local authorities a decade ago set out to rebalance Taihu’s ecosystem. As diatoms faded, macrophytes such as lotuses and water chestnuts had also begun to lose ground.

Provincial water managers cultivated and reintroduced marcophytes. “They thought it would clean the lake,” says Qin, because floating macrophytes impede wind-driven algae from clumping together. In research to support the reintroduction, NIGLAS scientists curtained off small sections of lake and seeded them with macrophytes; the plants flourished. Outside the experimental boundaries, however, the attempt at a natural antidote failed. “When the water is polluted, macrophytes don’t grow well,” says Qin. “We understood that we have to clean the lake first.”

Before that lesson could sink in, the 2007 drinking water emergency thrust Taihu into the national spotlight. At the time, Wuxi was drawing 80 percent of its drinking water from the lake. That May the algal mats were so thick, and the bloom so pervasive, that masses sunk to the bottom and rotted. “Decaying algae has a very strong smell, like dead fish,” says Qin. Wuxi residents complained that their tap water stank. Wuxi’s waterworks could not cope with the sheer amount of putrid algae sucked into the intake. An attempt to flush the lake with water diverted from the Yangtze River backfired; it forced even more algae into the intake, says Qin.

The crisis was a wakeup call. One immediate fix was to extend Wuxi’s water intake pipe from just offshore, where prevailing winds tend to sweep the pea-green algal mats, to the center of the lake. To wean itself off its Taihu dependency, Wuxi now pumps in half of its drinking water from the Yangtze. And the Jiangsu government launched measures, such as moving chemical plants, to reduce nutrient loading.

Local authorities are eager to do more —but major gains may only come from a clearer picture of the sources of nutrients washing into Taihu.

Scientists say that they need more basic data in order to restore the lake.

“We need to have basic data in order to restore the lake,” says Qin. In Taihu tributaries and the more than 100 canals that feed into the lake, “water quality is quite bad,” according to Zhu. Nitrogen spikes in the spring, after tea farmers cover plots in manure. Chemical fertilizers too are to blame. Twenty years ago, fertilizer was expensive and China possessed little equipment to apply it, says Zhu. Now, he says, “farmers in Jiangsu are rich. They can afford to use large amounts of chemical fertilizers.”

Agriculture is not the only source of nitrogen. NIGLAS’s Taihu Laboratory for Lake Ecosystem Research recently found that about a quarter of Taihu’s nitrogen inputs come from the atmosphere, most likely from vehicle emissions, Qin says.

A few dozen meters offshore, an instrument-filled hut sits just above Taihu’s turbid waters. With support from the grassroots Global Lake Ecological Observatory Network, NIGLAS last year built this $150,000 lab-on-a-lake to continuously measure nutrient concentrations, levels of carbon dioxide and methane wafting from the lake, and other parameters. “Before, we had to stand on a platform in the lake and manually take measurements—not safe in a thunderstorm,” says Qin. Now data streams to shore via a wireless network.

As Taihu’s pollution picture becomes more refined, local authorities are mulling whether to create a buffer zone along the shore several hundred meters in width, where farm fields and villages would be converted into wetlands and parks. In densely populated and wealthy Jiangsu, a relocation program would cost a fortune, Qin says. But it would give the embattled lake some breathing space. “Any step in this direction will be helpful,” says Paerl, “even if it only treats a fraction of the nutrient inputs.”

Other elements of the cleanup plan include further improving sanitation in the countryside and offering tax incentives to try to shift the region’s industrial profile from one dominated by chemical companies to one centered on renewable energy and Internet technologies. “Treating urban wastewater and reducing inputs from the major rivers draining into Taihu,” says Paerl, “will be key to solving the lake’s excess nutrient input problems.”

A winning strategy may require both quick fixes like dredging and dogged long-term efforts to curtail nutrient loading, says Steven Wilhelm, a microbiologist with University of Tennessee, Knoxville, who was at Taihu last month for fieldwork. “It’s not going to be easy,” he says.

Zhu for one is optimistic. In the next 5 to 10 years, he says, “we’ll see a big improvement.” He anticipates that both the area of Microcystis blooms and their duration will steadily shrink. But to eliminate the blooms—and restore Taihu’s natural order—will take decades more.