For years, Sujata Das has started her workday by climbing to the top of the Okhla landfill in New Delhi to wait for the dump trucks. As they have rolled in and dispensed their loads, she and hundreds of other ragpickers have sifted through the garbage by hand, looking for plastic, paper, and scrap metal that could be sold for recycling. For her labors, Das used to earn about 5,000 rupees ($80) a month, enough to feed her three children and send them to school.

Then, two years ago, the contents of the dump trucks abruptly changed.

Instead of carrying garbage and the occasional jackpot of a shirt or a metal pot, the trucks now deliver load after load of charcoal gray ash. The trash no longer comes directly from the streets of Delhi but via the Timarpur Okhla Waste Management Plant. Since late 2011, the plant has been accepting 1,950 metric tons of trash each day, a quarter of Delhi’s total, and burning it to convert its embedded energy into electricity. The ash is what’s left over. 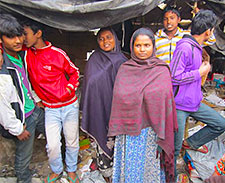 “Earlier we would find lots of plastics and paper,” explained Das, a vivacious 35-year-old in a purple headscarf. She stood in the muddy alleyway of her shantytown, where buildings are made from castoff cardboard and tarps. “But now they burn it so I don’t find it. What will we do with the ash?”

Vaporizing garbage and using the energy produced to create electricity would seem to be an ideal solution for India, where the growing landfills make a stink and the lights go out for a few hours every day. But critics contend that the Timarpur plant, the first fully functioning one in the country, is fouling the air even as it clears the land.

The Timarpur plant’s $44.6 million price tag is a tenth of that for a comparable plant in Europe.

The incineration technology used in the Timarpur plant lags behind that of state-of-the-art waste-to-energy incinerators now in operation in Europe, with one test in March by the Delhi Pollution Control Committee yielding levels of dioxins and furans more than 30 times above the legal limit. Neighbors have reported a film of black ash on their terraces since the plant opened. That, along with concern about pollution reaching nearby hospitals and the Kalindi Bird Sanctuary, prompted a neighborhood association to file a lawsuit, which has resulted in two court injunctions against the plant. But Timarpur — built and operated by the Jindal Group, India’s fourth-largest industrial conglomerate — keeps burning.

India’s big cities are poised for a building boom of waste-to-energy plants, but they are using inexpensive Chinese-manufactured incinerators with less rigorous pollution controls and operating in a new sector nearly devoid of regulations. The Timarpur plant’s $44.6 million price tag is a tenth of that for a comparable plant in Europe, according to reports in the Indian media.

A second plant is poised to open in Delhi and another is on the way. Three others are being built in the state of Andhra Pradesh and one in Gujarat, and more are planned in Chennai, Mumbai, and Bangalore, according to Ranjith Annepu, India coordinator for the Waste-to-Energy Research and Technology Council.

The growth of waste-to-energy plants has created a competition for rubbish and exposed a clash between waste-to-energy incinerators and economic opportunity for some of the poor in the world’s second-most-populous country. The nine months following the plant’s opening saw a drastic change in fortunes for the 450 trash collectors working at the Okhla landfill, a small subset of the 40,000 to 50,000 ragpickers who work in New Delhi. A survey by Chintan, a Delhi nonprofit that works with ragpickers, found that the population of Okhla ragpickers fell by two-thirds, to 150, as workers were forced to move away to find day labor that pays even less. Many families who remained said they took their children out of school in order to have more hands available to comb through the heaps of ash for valuable chunks of metal slag.

Ragpickers act as an informal recycling army in a country with almost no curbside recycling.

Ragpickers can be seen poking through rubbish piles in every Indian city, acting as an informal recycling army in a country with almost no curbside recycling. Working long days and carrying large sacks, they pluck plastic, paper, and metal from alley litter piles, overflowing curbside bins, regional collection hubs, and dumps.

Trash is a ubiquitous fact of modern India. It is strewn on many streets, leading to vermin and disease, or burned by residents in vacant lots and yards, creating toxic air pollution. Dumps are filled haphazardly and often aren’t covered by topsoil, increasing emissions of methane, one of the most powerful greenhouse gases.

“It is similar to how the U.S. was in the 1920s, when they were openly dumping the waste, but the U.S. always had land, and the cities had enough money to transport it far enough,” said Annepu. “Here the cities don’t have enough money, they don’t have enough land, and even if they build a landfill somewhere, the city expands so fast that within five or six years the landfill is encircled by people.”

On a cloudy afternoon earlier this year, I visited the Timarpur waste-to-energy plant as it ran at full tilt. The walkway between its six-story buildings filled with a hum that was nearly a roar. The air had a vague chemical smell but not the stench of trash. I looked into one of the three 10,000-ton collection pits, where a giant steel claw, as big as a UPS van, picked up a clutch of waste and transferred it to the top of a pile four stories tall, disturbing the resident flock of pigeons.

The garbage had already been run under magnets to pull out metal, shaken over mesh to remove pebbles, and sorted by hand for things that don’t burn (bricks and ceramics) and things that shouldn’t (rubber and PVC plastic). Among the remainder were recyclables like cardboard and other types of plastic; they burn hot, making them prized feedstocks. Next the claw delivered the trash to the incinerator, which is primed with diesel until it reaches a stable temperature of 850° C (1562° F). Superheated smoke rose up a flue surrounded by coils of water-filled pipes. The water turns to steam, which spins a turbine and creates electricity. Inside a control room, a large readout displayed the electrical output: 16 megawatt-hours, full capacity, which amounts to less than 0.3 percent of Delhi’s peak energy demand.

The plant is consuming a quarter of the trash of a city of 11 million and turning it into power.

Earlier, in a conference room, the operations manager, Sandip Dutt, explained his plant’s features with obvious pride. After all, the plant is not just consuming a quarter of the trash of a city of 11 million and turning it into power, but is the first in the country to successfully do so. In recent decades, more than a dozen large-scale composting and waste-to-energy plants have failed.

“The more (a landfill) will ferment, the more methane gas it will generate and harm the atmosphere,” said Dutt. “We are incinerating the waste so these landfill areas can be reclaimed. The negative part will always be there, the coin has two sides. You can say, ‘OK, ragpickers are not getting that much business.’ But then in the larger interest of society, I think these incinerator plants are sounding better than maintaining the livelihood of ragpickers.”

Near the end of the tour, my guide pointed up to the pair of 196-foot-tall smokestacks. “No smoke!” he said. As I looked back down at my notebook, I noticed that it was covered with a light dusting of ash from the plant.

The plant’s management claims that the scrubbers on the plant’s stacks are working, that it has added additional pollution-control technology not required by India’s Ministry of the Environment, and that emissions of pollutants like sulfur oxides and nitrous oxides are below legal limits. Plant officials have said that emissions of dioxins and furans — toxic chemicals emitted by the burning of PVC — are at zero, although that claim was contradicted by the tests from the Delhi Pollution Control Committee.

India does not have the laws or government agencies to regulate this new sector of waste-to-energy incineration.

Incineration Versus Recycling: In Europe, Debate Over Trash

Increasingly common in Europe, municipal “waste-to-energy” incinerators are being touted as a green trash-disposal alternative. But critics contend that large-scale incinerators tend to discourage recycling and lead to greater waste.READ MORE

That “legal limit” might be arbitrary, points out Ravi Agarwal, the head of Toxics Link, an Indian environmental organization. The technology to accurately monitor the smokestack of such a plant doesn’t exist in India, he said, and neither do laws or government agencies to regulate this new sector.

In any case, the plant was bought on the cheap compared to waste-to-energy plants in Europe. Dutt said his plant’s equipment was bought from Hangzhou Boiler Group in China and based on designs from Martin, a German boilermaker. Few documents have been made public about the design and construction of the plant. But lower quality filters and scrubbers may be one reason why the Timarpur plant emits more pollution than the low-emissions incinerators widely used in northern Europe. New Delhi officials have generally praised the Timarpur plant.

Meanwhile, the pile of black trash-ash looms over the other mounds at the Okhla dump, uncontained and at the mercy of the winds. Das and her fellow ragpickers continue to comb through it, though what they mostly find is metal, twisted into slag from the furnaces of the plant. No more plastic bottles.

“The little money we made was from that, but now that’s not the case and I find it very difficult to run my house,” Das said. “I can’t afford to feed my children well or send them to a school. That is the state of my life now.”