If you wanted to really mess with the world’s food production, a good place to start would be Bou Craa, located in the desert miles from anywhere in the Western Sahara. They don’t grow much here, but Bou Craa is a mine containing one of the world’s largest reserves of phosphate rock. Most of us, most days, will eat some food grown on fields fertilized by phosphate rock from this mine. And there is no substitute.

The Western Sahara is an occupied territory. In 1976, when Spanish colonialists left, its neighbor Morocco invaded, and has held it ever since. Most observers believe the vast phosphate deposits were the major reason that Morocco took an interest. Whatever the truth, the Polisario Front, a rebel movement the UN recognizes as the rightful representatives of the territory, would like it back.

Not many people would call phosphate a critical issue or one with serious environmental consequences. But even leaving aside the resource politics of the Sahara, it is an absolutely vital resource for feeding the world. It is also a resource that could start running low within a couple of decades — and one we grossly misuse, pouring it across the planet and recycling virtually none of it. 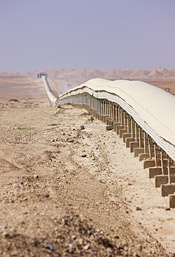 Photo by Ed Darack
The Bou Craa mine in the Western Sahara sends phosphate down a 150-kilometer-long conveyor belt to the port of El Ayoun.

The world’s food supplies are alarmingly dependent on the phosphate fertilizer that is hewn from the desert of the Western Sahara. The vast open-cast mine at Bou Craa delivers several million tons of phosphate rock every year down a 150-kilometer-long conveyor belt, the world’s longest, to the Atlantic port of El Ayoun. From there, it is distributed around the world and made into fertilizer.

Morocco’s phosphate reserves are owned by the Office Cherifien des Phosphates, a Moroccan state agency. Given the almost unlimited executive powers of the Moroccan monarch, it might reasonably be said that most of the world’s known reserves of phosphate are, in effect, owned by King Mohammed VI and his Alaouite dynasty, which has reigned in Morocco since the 17th century.

If the people of Western Sahara ever resume their war to get their country back — or if the Arab Spring spreads and Morocco goes the way of Libya — then we may be adding phosphate fertilizer to the list of finite resources, such as water and land, that are constraining world food supplies sooner than we think.

Phosphorus is one of the building blocks of all life. Every living cell requires it. Plants need phosphorus to grow as much as they need water. Many soils do not have enough to meet the voracious demands for phosphorus of the high-yielding crop varieties of the Green Revolution. But we can provide more by mining phosphate rock and turning it into fertilizer to spread on the land.

It takes one ton of phosphate to produce every 130 tons of grain, which is why the world mines about 170 million tons of phosphate rock every year to ship around the world and keep soils fertile.

Most of the world’s best phosphate reserves are gone, and those that remain are in just a handful of countries.

Currently, only about 15 percent of that comes from mines in the Western Sahara and Morocco. But the only other large producers, the U. S. and China, mostly keep supplies for their own use. So Morocco is by far the biggest contributor to international trade, with more than half the total business. The people of India, the world’s largest importer, would be starving without Morocco’s phosphates. Brazil’s agricultural boom would never have happened otherwise.

Even more critically in the longer term, the U.S. Geological Survey says that of the 65 billion tons of the world’s known phosphate rock reserves — and the estimated 16 billion tons that might be economic to mine — almost 80 percent is in Western Sahara and Morocco. Add in China’s reserves, and the figure rises to almost 90 percent. The U.S., with 1.4 billion tons, is close to running out. You can see why agronomists are starting to get worried.

The world is not about to run out of phosphate. But demand is rising, most of the best reserves are gone, and those that remain are in just a handful of countries. Dana Cordell of Linkoping University in Sweden, who runs an academic group called the Global Phosphorus Research Initiative, says we could hit “peak phosphorus” production by around 2030.

As domestic production wanes, the U.S. is starting to join those countries — most of the world, in fact — that import phosphate from Morocco and the Western Sahara. American imports cross the Atlantic courtesy of Potash Corp, the Canada-based fertilizer company whose hostile takeover bid by the Australian mining giant BHP Billiton was blocked by the Canadian government last year. And phosphate mining in Florida, which is home to the world’s largest phosphate mine, is being challenged by environmentalists concerned about its impact on waterways and drinking water supplies.

Already, like other key commodities with once-dominant sources running low, the price of phosphate is starting to yo-yo alarmingly. Prices spiked at an 800-percent increase in 2008.

A century ago, much of the world’s internationally traded phosphate came from bones (a major English import at one time) and guano, excavated from Pacific islands where birds had been defecating phosphate for millions of years. But bones are not traded much any more, and most of the guano islands are now mined out. The island state of Nauru, for instance, is nothing more than a moonscape after decades of mining it to fertilize the grain fields of Australia.

The other key ingredient needed to fertilize modern high-productivity farm soils is nitrogen. We know how to “fix” nitrogen from the atmosphere. If the German chemist Fritz Haber hadn’t come up with his process in 1908, there wouldn’t have been a Green Revolution — and there wouldn’t be 7 billion people on the planet today. The nitrogen produced by this process is estimated to be directly responsible for feeding 3 billion of us.

But there are no new sources of phosphate. We continue to mine the rock — or we starve.

Can we find ways to recycle phosphate and keep it in the food chain where we need it?

Phosphate strip mines are environment wreckers. They produce around 150 million tons of toxic spoil a year. Their massive draglines, huge slurry pipes, and mountainous spoil heaps dominate the landscape for tens of miles in key mining zones, whether in the North African desert or in Florida, a state that still provides three-quarters of American farmers’ phosphate needs.

The world’s largest mine is at Four Corners in an area known as Bone Valley in central Florida. The Four Corners mine covers 58,000 acres, an area five times the size of Manhattan. It is owned by Mosaic, a company recently spun off from agribusiness giant Cargill. Next door is the world’s second-largest mine, South Fort Meade. But South Fort Meade is living on borrowed time — its expansion plans are being opposed by local groups, and unless it can expand, the mine will have to close.

As the drag mines move south in Florida, anger has been growing about the environmental impacts. A million tons of mine waste, containing lows levels of radioactivity, are already piled up at dump sites around the state, and disputes are growing over promised mine cleanups. Rivers have dried up, and settling ponds have leaked.

Last year, the local chapter of the Sierra Club went to court to block Mosaic’s plans to extend the life of the South Fort Meade mine by expanding its footprint. The group is concerned about the fate of the Peace River, a vital source of Florida’s drinking water; it says the U.S. Army Corps of Engineers gave approval for the expansion without first conducting a full environmental audit. The case is unresolved to date.

As for the impending shortages of phosphate, will technological advances and market forces solve the problem? We certainly waste a lot of this most valuable resource. Globally, we allow some 37 million tons of phosphorus to spill into the environment each year. It mostly flows down sewers and agricultural drains into rivers and lakes, where it feeds the growth of toxic cyanobacteria and consumes oxygen, creating eutrophication and “dead zones.”

While nitrogen pollution tends to get top billing as a cause of eutrophication, cyanobacteria can often abstract nitrogen from the air. David Schindler, of the University of Alberta in Edmonton, and others have argued that limiting phosphorus pollution is the key to eliminating eutrophication.

So how can we stop phosphate pollution, recycle it, and keep it in the food chain where we need it? Composting crop residues would be a good way of recycling this valued nutrient back into the soil, cutting the need for new applications of fertilizer — so would capturing some of the 3 million tons of phosphorus that cycles through human bodies annually, after being consumed in our food. Cordell says we should give top priority to recycling our urine, which contains more than half of all the phosphorus that we excrete.

But another conventional technical fix for a resource in short supply — finding a substitute — is not available. Presently, there simply are no substitutes for phosphorus.