Early this year, a Chinese fishing vessel ran aground in Tubbataha Reefs Natural Park, a UNESCO World Heritage site in the Philippines. The 12 crewmen were already in trouble for damaging the protected coral reef. But then the Philippine Coast Guard crew working to re-float the vessel got a look at the cargo: 400 boxes of what may be the world’s most heavily trafficked wild mammal contraband — pangolins, carefully butchered and frozen to be served up as a status symbol on the dinner plates of the nouveaux riches in China and Vietnam. 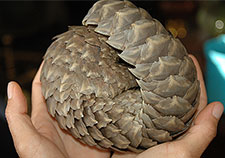 When feeling threatened, a pangolin balls itself up in the shelter of its armor plating. TIKKI HYWOOD TRUST

If you have never even heard of pangolins, much less pangolin poaching, you are not alone. Even conservationists tend not to know much about these armor-plated animals that are commonly known as scaly anteaters, perhaps because they are small, uncharismatic, and nocturnal. The headlines tend to focus on bigger and seemingly more immediate problems, notably the slaughter last year of 35,000 elephants for their ivory and 810 rhinos for their horns. But almost unnoticed, the illegal trade in pangolins has raged out of control, to meet demand in East Asia for both their meat and their scales, which are roasted and used, like rhino horn, in traditional medicines.

Within the last year alone:

— French officials seized 110 pounds of pangolin scales, said to be worth $100,000, being transshipped via Charles De Gaulle Airport from Cameroon to Vietnam.

— Customs officials in Vietnam discovered a cargo of 6.2 tons of frozen pangolins being smuggled in from Indonesia.

— Police in India stopped a shipment of scales taken from 300 pangolins.

Annual seizures run to about 10,000 pangolins, according to Dan Challender, co-chair of the pangolin specialist group for the International Union for Conservation of Nature (IUCN). But that number is almost certainly a small fraction of what gets through to the marketplace. Notebooks seized in 2009 from one trafficking syndicate, for instance, revealed that 22,000 pangolins had been killed over 21 months just in the northern Borneo state of Sabah.

Two of the four species in Asia are now categorized as endangered on the IUCN red list.

All eight pangolin species are in dramatic decline and Challender says the specialist group is currently reviewing their conservation status on the IUCN red list. Two of the four species in Asia are now listed as endangered, and in Africa, two are near threatened. Until now, the African species have mainly been hunted for bush meat. But demand from China and Vietnam has recently pushed prices there as high as $7,000 for a single animal, according to Darren Pietersen, who tracks radio-tagged pangolins for his doctoral research at the University of Pretoria.

The name “pangolin” comes from the Malayan dialect word “pengguling,” meaning “something that rolls up.” It’s an apt description of the pangolin’s primary means of self-defense. When threatened, a pangolin will tuck its head under its tail and ball itself up in the shelter of its armor plating — it looks a bit like a basketball crossed with an artichoke. In this posture, it’s “too big for a lion or hyena to get its mouth around and get a grip,” says Pietersen, and the scales are too tough to penetrate. “Most often a lion just chews on them for a few hours and gives up.”

The pangolin’s way of life has also generally provided it with protection against predators and hunters. A pangolin is usually active for only about four to eight hours a night, when it heads out to raid ant nests and termite mounds. Its long, pencil-thin tongue can extend up to 16 inches for probing into a nest, and it is coated with a sticky substance like flypaper to catch and retrieve insects. The ants defend themselves by spraying formic acid, says Pietersen, but a pangolin generally feeds and moves away from a nest in a minute or two, before the noxious spray can have much effect. Otherwise, arboreal pangolins spend most of their time in nest holes high up in tree trunks, and ground-dwelling species hide out in burrows as much as 11 feet beneath the surface.

Pangolins produce only one offspring a year, not enough to replace the population being lost to poachers.

But hunters now use dogs to locate arboreal pangolins or they spotlight the animals as they forage. Then they take down the nest tree or set snares outside burrows. The basketball-like defensive posture that lions can’t handle turns out to be perfectly suited to human poachers, who can pick up a pangolin and bag it without even a struggle.

That makes pangolins “the new rhinos,” says Lisa Hywood, who manages the Tikki Hywood Trust, an animal rescue and conservation facility in Zimbabwe. But she says the hazard for pangolin species is more urgent than for bigger, better known species: Zoos at least know how to breed elephants and rhinos in captivity. So even if every last one were to be hunted out, it would still be possible to save those species and reintroduce them to the wild.

But so far, she says, captive breeding of any of the eight pangolin species has proven extraordinarily difficult. Moreover, captive breeding wouldn’t solve the problem: Pangolins in the wild produce only one offspring per year, not nearly enough to replace the population being lost to poachers. (In a horrific twist, presenting a pangolin fetus for dinner is regarded as a particularly impressive status symbol in China.) The bottom line is that if a pangolin species goes extinct in the wild, it will be gone forever.

In July, the IUCN sponsored a meeting in Singapore of 40 conservationists from 14 countries to develop a global plan for pangolin conservation. Laws banning the trade are already in place in many countries, and it is also forbidden under the Convention on International Trade in Endangered Species. But enforcement is minimal, often with only token punishment for poachers. When they seize a pangolin shipment, some countries simply auction it off again, moving it back into the illegal market at a profit.

What’s needed are programs to reduce demand for pangolin parts in East Asia, a conservationist says.

What’s needed, says Jonathan Baillie of the Zoological Society of London, are programs to “reduce demand for pangolin parts in East Asia” and also to create “pangolin strongholds where we can ensure the viability of populations in the wild.” One likely initiative is a social marketing campaign, with celebrity support, to make dead pangolins a symbol of shame rather than status in East Asia. The campaign would also inform people that pangolin scales, which are made of keratin, like fingernails, have no medicinal value whatsoever. 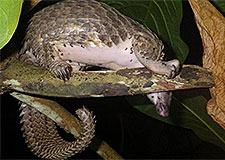 Raising public awareness also means introducing pangolins to the public as living creatures rather than simply as meat on a plate. Despite their obscurity, says Lisa Hywood, pangolins do in fact have their charismatic qualities. Her facility in Harare rehabilitates rescued pangolins for return to the wild. Part of the routine is a daily walk, she says, with the pangolins doing “what an animal does, digging, rolling in the dirt, investigating.” They aren’t on a leash. The handler walks a few steps behind, she says, and the pangolins don’t ball themselves up or run away because “they are very intelligent animals, and they can tell the difference between a person who is trying to kill and eat them, and one who is caring for them.”

Hywood has one pangolin she has been rearing for the past 18 months named Chaminuka. She says he recognizes her when she comes home, makes a soft chuffing noise, and stands up to hold her hand and greet her.

It can of course be deeply moving to work with elephants, she adds, speaking from experience. But she has discovered that working with pangolins can be even more powerfully emotional, especially as these curious creatures rapidly vanish from the face of the Earth.