As someone who cares deeply about elephants, I find it hard to read about the number of these magnificent creatures now slain in Africa for their tusks, and even harder to look at images of their crumpled corpses and chain-sawed faces. Like many, I believe that unless something can be done to stop the carnage, elephants may disappear from many of their traditional ranges.


There’s little dispute over what drives this alarming illegal slaughter: excessive Asian demand for their tusks, especially from China, which has a legal ivory 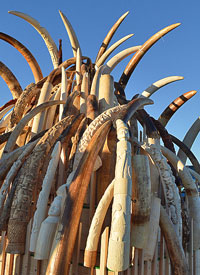 This confiscated ivory was part of a stockpile
destroyed by the U.S. government last year.
USFWS

market based on dwindling government stocks. But China also has a much bigger illegal market that swamps the legal trade and absorbs the majority of poached ivory leaving Africa.


Recent responses to the poaching crisis, from beefing up protection for Africa’s herds to increasing surveillance in ports, cracking down on smuggling syndicates, and using sniffer dogs at airports — though well-intentioned — aren’t enough to stop the killings. What can be done? While it may seem counterintuitive, what’s needed is a legal ivory trade structured to choke off the demand for illegal ivory that currently is underwriting criminal networks from the killing fields to retail shops.


Given that as many as 100,000 elephants may have been killed in Africa in 2010-12, you’d think most conservationists would be open to any possible strategy that could reduce poaching. But the idea of suppressing demand for illegal ivory by a partial lifting of the cross-border ivory ban imposed in 1990 by CITES (the Convention on International Trade in Endangered Species) is anathema to most elephant campaigners. They’ve embraced a simplistic, emotive anti-ivory agenda that’s perfect for fund-raising, but wholly inadequate to cope with global realities.

If there were no poaching, there’d still be a supply of ivory from elephants who die of natural mortality.

Reopening international legal ivory commerce in any form runs counter to the view, now hardening into an ideology, that all trade in tusks should be permanently proscribed, worldwide. Any talk of trade is denounced as divisive and distracting, something that threatens to undermine the goal of global prohibition.


But how realistic — and desirable — is ivory prohibition? Ivory has been an item of trade since pre-history, and its use is deeply ingrained in many cultures. Its allure may diminish, but won’t disappear. Prohibiting legal ivory commerce drives demand into the black market, leaving trade solely in the hands of criminals.


Demonizing ivory by promoting the questionable destruction of national ivory stockpiles, shutting down previously legal ivory sales in the U.S., the EU and elsewhere, even calling for destroying ivory art in public collections — none of these approaches has any effect on reducing poaching, and might even increase it.


Anti-ivory trade campaigners base their case for ivory prohibition on the misleading claim that “behind every piece of ivory is a dead elephant.” As a result, the public equates “dead” with “killed,” which is not always the case. Think about it: If there were no poaching whatsoever, there’d still be a significant supply of ivory from elephants that die from natural mortality.


How much of that guilt-free ivory is available? An unexploited elephant population produces approximately 0.2 kilograms of ivory per animal per year. Poaching, along with the difficulty of recovering tusks in the bush, reduces the amount available. Still, some 20 tons a year are found and stockpiled in the warehouses of the park systems of the sub-Saharan African states that have elephant populations.

Since no elephants are harmed in its collection, CITES considers this stockpiled ivory legal, along with the ivory from elephants shot for justifiable management

The Case Against a Legal Ivory
Trade: It Will Lead to More Killing
Conservationist Mary Rice argues that proponents of lifting the global ban on ivory trading are ignoring the fact that it was the legal market for ivory that pushed elephants toward extinction decades ago.
Read More

reasons (such as controlling problem animals), which contributes roughly a similar amount a year to African stockpiles. Any “blood ivory” recovered from poachers cannot be sold under CITES regulations, which is as it should be; but sadly, hundreds of tons of blameless, legal ivory can’t either, because the governments that are signatories to CITES can’t agree on easing the current trade ban.


This is a tragedy for Africans, who can’t benefit from a natural resource that’s theirs, and for elephants, which could benefit if new revenues were available for conservation programs that are currently underfunded.


That’s why CITES is studying the implications of resuming trade in ivory and has invited comments from stakeholders. The question will come up again at the next meeting in Cape Town, South Africa, in 2016.


Campaigners alarmed at that prospect say that demand for ivory can’t be controlled and that sustainable supply will never be enough. But demand for any material can be manipulated, shaped, and managed by regulation and by education aimed at stigmatizing illicit ivory use. Hi-tech certification (using DNA testing), tracking, registration, and taxation of legal ivory sales — combined with effective enforcement to criminalize trafficking, laundering, selling, and possession of illegal ivory — can go a long way toward flattening the illegal trafficking of tusks.


Like the regulatory regimes in place around the globe that permit and control accepted uses of alcohol, tobacco, and drugs while also suppressing unacceptable uses, a well-managed ivory trade system would be self-policing and would use heavy taxation on finished carvings to drive down consumer demand. This tax money could help fund enforcement, education, and conservation in the source countries.


A legal trade in tusks does not mean a return to the easily abused system of quotas that CITES had in place in the pre-ban 1980s. Nor would it involve a stop-and-go system of “one-off” sales, like those that occurred in 1999 and 2008 — those failed because there was no guarantee of a continuing supply for buyers.

The best solution would appeal to nations’ self-interest in profiting from ivory, without killing elephants.

Instead, the trade would be based on regular auctions of legal ivory from African countries that have stable elephant populations and are motivated enough to organize credible recovery and stockpiling systems. Buying countries would be limited to those that have transparent enforcement and are equally motivated to prevent illicit trafficking. CITES could revoke a country’s selling or buying status at any time.


What about the assertion that legal ivory simply provides cover for illegal ivory? That happens where domestic enforcement is lax (as, most notably, in China).


And what about the related claim that a legal trade can’t work because the countries in the supply chain — from origin to transit to consumption — are simply too corrupt? If these countries are so untrustworthy that regulating legal trade with them would be impossible, what makes anti-ivory advocates think the same governments would enforce the total prohibition of ivory use, presuming they could be persuaded (or strong-armed, or bribed) to declare the end of ivory within their borders? Far better to come up with a solution that will appeal to their naked self-interest in profiting from ivory — without having to kill elephants.


Consider China. It’s highly unlikely the second biggest economy in the world will undergo a sudden mass conversion to the view that it should immediately ban all ivory trade. Yes, China’s authoritarian government has the power to impose such a draconian change. But it places great value on the cultural significance of its traditional ivory carving industry, and there’s no sign it plans to shut it down.


The solution to snuffing out China’s illegal ivory trafficking is for the international community to be willing to give the country access to a flow of legal ivory for its legitimate carving industry if — and only if — China demonstrably crushes its brisk illegal trade, which, obviously, it has the capacity to do.


With no way to sell contraband tusks to the Chinese, there’d be diminishing payoffs for African poachers, smugglers, and corrupt officials.


The result? Less elephant poaching, benefitting the species and the governments and people of Africa.

Read the case against a legal ivory trade

The Case Against Ivory Trade:
It Will Just Lead to More Killing

Proponents of easing the global ban on ivory are ignoring the fact that it was a legal market for ivory that pushed elephants toward extinction only a few decades ago. What’s needed now is not a legal ivory market, but better regulation and enforcement of the existing ban.