Emerging diseases are in the news again. Scary viruses are making themselves noticed and felt. There’s been a lot of that during the past several months — West Nile fever kills 17 people in the Dallas area, three tourists succumb to hantavirus after visiting Yosemite National Park, an Ebola outbreak in the Democratic Republic of the Congo claims 33 lives. A separate Ebola outbreak, across the border in Uganda, registers a death toll of 17. A peculiar new coronavirus, related to SARS, proves fatal for a Saudi man and puts a Qatari into critical condition, while disease scientists all over the world wonder: Is this one — or is that one — going to turn into the Next Big One?

By the Next Big One, I mean a murderous pandemic that sweeps around the planet, killing millions of people, as the so-called “Spanish” influenza did in 1918-19, as AIDS has been doing in slower motion, and as SARS might have done in 2003 if it hadn’t been stopped by fast science, rigorous 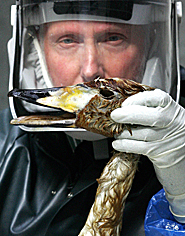 Carl De Souza/AFP/Getty Images
An official from the Scottish Agricultural College holds a dead swan to be tested for avian flu.

measures of public health, and luck. Experts I’ve interviewed over the past six years generally agree that such a Next Big One is not only possible but probable. They agree that it will almost certainly be a zoonotic disease — one that emerges from wildlife — and that the causal agent will most likely be a virus. They agree that sheer human abundance, density, and interconnectedness make us highly vulnerable. Our population now stands above seven billion, after all, a vast multitude of potential victims, many of us living at close quarters in big cities, traveling quickly and often from place to place, sharing infections with one another; and there are dangerous new viruses lately emerging against which we haven’t been immunized. Another major pandemic seems as logically inevitable as the prospect that a very dry, very thick forest will eventually burn.

That raises serious issues in the realm of health policy, preparedness, and medical response. It also suggests a few urgent questions on the scientific side — we might even say, the conservation side — of the discussion. Those questions, in simplest form, are: Where? How? and Why? Addressing them is crucial to understanding the dynamics of emerging diseases, and understanding is crucial to preparedness and response.

First question: From where will the Next Big One emerge? Answer, as I’ve noted: Most likely from wildlife. It will be a zoonosis — an animal infection that spills over into humans.

Everything comes from somewhere. New human diseases don’t arrive from Mars. Notwithstanding the vivid anxieties of The Andromeda Strain (1969) and other such fictions, lethal microbes don’t arrive on contaminated satellites returning from deep space. (Or anyway, knock wood, they haven’t so far.) They emerge from nonhuman animals, earthly ones, and spill over into human populations, catching hold, replicating, sometimes adapting and prospering, then passing onward from human to human.

According to one study, 72 percent of all recently emerged zoonotic pathogens have come from wildlife.

According to one study, 58 percent of all pathogen species infecting humans are zoonotic. Another study found that 72 percent of all recently emerged zoonotic pathogens have come from wildlife. That list includes

everything from Ebola and Marburg and the HIVs and the influenzas to West Nile virus, monkeypox, and the SARS bug.

In Malaysia, a virus called Nipah spilled over from fruit bats in 1998. Its route into humans was indirect but efficient: The bats fed in fruit trees overshadowing factory-scale pigsties; the bat droppings carried virus, which infected many pigs; the virus replicated abundantly in the pigs, and from them infected piggery workers and employees at abattoirs. That outbreak killed 109 people and ended with the culling of 1.1 million pigs.

Second question: How do such pathogens get into humans? The particulars are various but the general answer is: contact. Contact equals opportunity, and the successful pathogens are those that seize opportunities to proliferate and to spread, not just from one host to another but from one kind of host to another.

Wild aquatic birds defecate in a village duck pond, passing a new strain of influenza to domestic ducks; the ducks pass it to a Chinese boy charged with their care, after which the boy passes it to his brother and sister. A man in Cameroon butchers a chimpanzee and, elbow deep in its blood, acquires a simian virus that becomes HIV-1. A miner in Uganda enters a shaft filled with bats carrying Marburg virus and, somehow, by ingesting or breathing bat wastes, gets infected. Contact between people and wildlife, sometime direct, sometimes with livestock as intermediaries, presents opportunities for their infections to become ours.

We are interacting with wild animals and disrupting the ecosystems they inhabit to an unprecedented degree.

What we’re doing is interacting with wild animals and disrupting the ecosystems that they inhabit — all to an unprecedented degree. Of course, humans have always killed wildlife and disrupted ecosystems, clearing and fragmenting forests, converting habitat into cropland and settlement, adding livestock to the landscape, driving native species toward extinction, introducing exotics. But now that there are seven billion of us on the planet, with greater tools, greater hungers, greater mobility, we’re pressing into the wild places like never before, and one of the things that we’re finding there is… new infections. And once we’ve acquired a new infection, the chance of spreading it globally is also greater than ever.

We cut our way through the Congo. We cut our way through the Amazon. We cut our way through Borneo and Madagascar and northeastern Australia. We shake the trees, figuratively and literally, and things fall out. We kill and butcher and eat many of the wild animals found there. We settle in those places, creating villages, work camps, towns, extractive industries, new cities. We bring in our domesticated animals, replacing the wild herbivores with livestock. We multiply our livestock as we’ve multiplied ourselves, operating huge factory-scale operations such as the piggeries in Malaysia, into which Nipah virus fell from the bats feeding in fruit trees planted nearby, after the bats’ native forest habitats had been destroyed. We export and import livestock across great distances and at high speeds. We export and import other live animals, especially primates, for medical research. We export and import animal skins, exotic pets, contraband bushmeat, and plants, some of which carry secret microbial passengers.

We travel, moving between cities and continents even more quickly than our transported livestock. We eat in restaurants where the cook may have butchered a porcupine before working on our scallops. We visit monkey temples in Asia, live markets in India, picturesque villages in South America, dusty archeological sites in New Mexico, dairy towns in the Netherlands, bat caves in East Africa, racetracks in Australia — breathing the air, feeding the animals, touching things, shaking hands with the friendly locals — and then we jump on our planes and fly home. We get bit by mosquitoes and ticks. We alter the global climate with our carbon emissions, which may in turn alter the latitudinal ranges within which those mosquitoes and ticks live. We provide an irresistible opportunity for enterprising microbes by the ubiquity and abundance of our human bodies.

Everything I’ve just mentioned is encompassed within this rubric: the ecology and evolutionary biology of zoonotic diseases. Ecological circumstance provides opportunity for spillover. Evolution seizes opportunity, explores possibilities, and helps convert spillovers to pandemics. But the majesty of the sheer biological phenomena involved is no consolation for the human miseries, the deaths, and the current level of risk.

There are things that can be done — research, vigilance, anticipation, fast and effective response — to stave off or at least mitigate the Next Big One. My point here is different. My point is about human ecology, not human medicine. It behooves us to remember that we too are animals, interconnected with the rest of earthly biota by shared diseases, among other ways. We should recall that salubriuous biblical warning from the Book of Proverbs: “He that troubleth his own house shall inherit the wind.” The planet is our home, but not ours only, and we’d be wise to tread a little more lightly within this wonderful, germy world.