A few years ago, as he was puzzling over the egg-tending behavior of a common forest salamander, herpetologist Reid Harris began to wonder if he might be looking at a novel solution to one of the most devastating global pandemics of our time. No one knew it at the time, but the four-toed salamander was about to become a pioneer species in the incipient field of microbial conservation biology, a dramatically different way of understanding and protecting wildlife.

The salamander Harris was studying lives in the leaf litter around forest pools from Michigan to Florida. Not all females in the species tend their nests, but the ones that do have an oddball way of weaving in and out among the eggs.

In 2008, Harris and other researchers at James Madison University in Virginia demonstrated that this weaving behavior serves to inoculate the eggs with antifungal bacteria from the female’s skin — and that the ones receiving this form of probiotic maternal care have a much higher rate of survival against infection by a common egg fungus.

At a herpetological conference three years earlier, Harris had suggested that it might be possible to identify anti-fungal bacteria species occurring naturally on the skin of other amphibian species and “bio-augment” them as a probiotic protection. And he thought it might work not just against the egg fungus, but also against the chytrid fungus that is causing massive declines in amphibian species worldwide. That fungus has rapidly spread around the world over the past two decades and now affects more than 500 amphibian species in 52 countries. Spores from the chytrid fungus, Batrachochytrium dendrobatidis (or Bd), invade the skin of amphibians and block normal respiration, leading to electrolyte imbalance, brain swelling, and death.

The study of the human microbiome ‘could be applied to meet conservation challenges,’ one study found.

The chytrid fungus has already pushed at least two species over the edge into extinction (the golden toad in the Costa Rican cloud forest, and the gastric brooding frog in Australia). Though scientists are cautious about saying such things categorically, the pandemic may have caused as many as 100 extinctions, with gloomy herpetologists predicting many more still to come.

In any less desperate group of biologists, what Harris was proposing would probably have elicited a faint rolling of the eyes. Asked about the idea of using microbes to protect animals in the field and at zoos, for instance, one zoo curator interviewed for this article remarked that conservationists already have plenty to worry about “without taking some kind of biochemistry approach.”

But just within the past decade, rapid improvements in DNA sequencing technology have made it possible and economically practical to identify every kind of bacteria, fungi, and virus living in and around a species. (In the past, biologists could study only the small percentage of microbes that can be cultured in a Petri dish.) Researchers have so far applied this new technology mainly to the human microbial community, or microbiome, and that research has already produced a dramatic shift in thinking about our own health care. In place of the old germ theory view of microbes as our deadly enemy, it now looks as if they are also our essential allies, both a cause of diseases and a key to preventing them.

But “the professional conservation community appears to be largely unaware of these developments,” a team of biologists noted last year in the journal Conservation Biology. The article proposed “that the concepts and methods used to study the human microbiome could be applied to meet conservation challenges” — for instance, to understand why the same Helicobacter bacteria that are harmless in the wild cause gastritis for cheetahs in zoos, or to figure out how to prevent the callitrichid wasting syndrome that afflicts captive marmosets and tamarins. 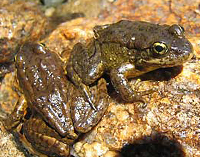 Harris’s idea about amphibian species caused a light to switch on for Vance Vredenburg of San Francisco State University. He soon struck up a partnership with Harris to test the probiotic idea in the mountains of the Sierra Nevada. There, Vredenburg had been watching helplessly as the chytrid fungus swept through, killing off population after population of mountain yellow-legged frogs.

The skins of yellow-leg frogs turned out to carry the same anti-fungal bacteria species that Harris had found on salamanders back East, though not necessarily enough to protect them. The researchers began to brew the stuff in the lab, producing buckets of murky purple bacterial soup. (Janthinobacterium lividum gets its species name from its bluish color.) Then they briefly bathed lab-reared yellow-legged frogs in the liquid and, after waiting two days for the probiotic to build up on the skin, they exposed the frogs to the chytrid fungus. In the group that had not gotten the protective bath, more than 80 percent soon died. In the group treated with anti-fungal bacteria, none did.

Vredenburg was already thinking about field-testing microbial protection on a pond at 11,000 feet in Sequoia & Kings Canyon National Parks, one of the last remaining havens for the frogs, where the chytrid fungus was soon expected to arrive.

The idea of conservation biologists turning to microbes in the fight against a pandemic probably should not sound all that surprising. Much of the recent reporting about the microbiome in the popular press has made it sound as if this is a bold new world discovered by the medical community. But microbiome research actually originated in the ecological community, says Yale University microbiologist Jo Handelsman. Ecologists started thinking about the beneficial role of microbes at least 130 years ago, she says, when they identified the crucial function of bacteria in fixing nitrogen for soybeans, peanuts, and other legumes. It’s the medical community that has borrowed ecological thinking, she argues, not the other way around.

Even so, the idea of microbial conservation biology may seem like a leap for wildlife scientists because it requires them to think about their familiar study animals not just as organisms, but as superorganisms — that is, as the host species together with its essential bacteria, viruses, and fungi. It requires thinking not just about the genome but about the metagenome, a term Handelsman coined for the interacting genes of the host species and all its microbial fellow travelers.

It’s too soon to say how this new way of looking at species will change how we treat wildlife.

It’s too soon to say exactly how this new way of looking at species will change how we treat wildlife. But for instance, understanding the microbiome could help improve the generally dismal success rate of efforts to reintroduce captive-bred species to the wild, biologist Kent H. Redford, lead author of the Conservation Biology article, suggested in an interview. Maybe “the zoo zebra you put back in the wild isn’t really a zebra,” he said, because it lacks certain crucial microbes from its native habitat.

For instance, hellbenders, a kind of giant salamander, have rapidly declined in streams from New York and Ohio down to Mississippi. They are now being captive-bred in zoos for reintroduction. But their young “are likely to have atypical and depauperate microbial communities and naive immune defences,” according to another article, being published in the current issue of Ecology Letters. Probiotic inoculation might help them handle the stress of being released into the wild, writes lead author Molly C. Bletz, a researcher in Harris’s lab at James Madison University.

Though the idea has not yet been tested, Bletz and her co-authors also suggest that probiotic inoculation might provide protection against white-nose syndrome, which has devastated bat populations in the eastern United States. They recommend screening European bats to see if some kind of protective microbe might be part of the explanation for why bats there survive infection with the white-nose pathogen, while bats in North America succumb.

Researchers have looked at the role of microbes in the feast-and-famine cycle of Burmese pythons.

Other researchers are also working on the microbiome in various wildlife species simply to establish a microbial baseline, or to get a microbial perspective on a particular biological process. At the University of Colorado in Boulder, for instance, researchers recently compared the noxious oral bacteria of Komodo dragons in the wild with the somewhat less noxious bacteria of their captive counterparts at the Denver Zoo. Another study in the same lab looked at the role of microbes in the feast-and-famine eating cycle of Burmese pythons. (To be sure that they were looking at a python’s own microbes, says researcher Liz Costello, they first had to characterize the microbes in the food it was eating. That meant putting frozen white rats in a blender and liquefying them for analysis. “It looked like a chocolate milkshake, with teeth in it.”)

And in a recent issue of the journal Science, Michigan State University researchers reported that they have developed a technique for preventing a mosquito species from acquiring and transmitting malaria by inoculating it with a particular strain of Wolbachia bacteria. The same group successfully field-tested a similar technique in 2011 to prevent transmission of dengue fever. 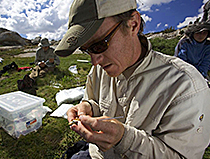 For Harris’s probiotic idea, the only field test so far is the one the National Park Service gave Vredenburg permission to try in 2010 in California, at Sequoia & Kings Canyon parks. As a precaution against introducing an unfamiliar microbe, he first visited Dusy Basin there that July and found the right bacteria on just one of 40 frogs. Over the next ten days, he brewed the bacteria from a single droplet into tens of billions of bacterial cells, about 10 liters of liquid. Then he returned to inoculate 80 percent of the frog population, leaving the rest untreated as a control. When the chytrid fungus arrived as expected later that summer, only the treated frogs survived.

For Vredenburg, killing weather the following winter and predation by introduced species took some of the satisfaction off that initial success. Only a few yellow-legged frogs have managed to hang on at Dusy Basin. And when another researcher subsequently attempted to inoculate laboratory-reared Panamanian golden frogs against the chytrid fungus using the same bacterial species, J. lividum, the experiment failed completely. To Harris, that merely suggests the need to do more careful preliminary research to identify the right bacteria for a particular species and habitat.

It’s also a reminder of one of the more daunting challenges of working with the microbiome in plants, humans, and wildlife alike: It involves many different microbial species interacting in an almost infinite variety of ways. DNA sequencing can now identify all of those microbial species. But that’s a long way from understanding how they function in a particular situation. And it’s longer still from the point where we can get them to do what we want right now and keep them doing it long enough to make a difference.

While Vredenburg is continuing his work on yellow-legged frogs, Harris has his eyes on Madagascar, which is famous for its 300 or so colorful frog species, 99 percent of them found nowhere else on Earth. So far, this large island off the east coast of Africa has escaped the chytrid fungus. That makes it urgent to prepare by studying the amphibian microbiome there now, says Harris. Ideally, researchers will identify local anti-fungal bacteria that protect a variety of amphibians, rather than just a single species. And because hand-capturing amphibians and bathing them individually is impractical, the researchers are also working to develop protocols to treat entire ponds and wetlands.