In the summer of 2006, geoengineering — the radical proposal to offset one human intervention into planetary systems with another — came roaring out of the scientific closet. Deliberate climate modification, as climate scientist Wally Broecker once noted, had long been “one of the few subjects considered taboo in the realm of scientific inquiry.”

Two things spurred this dramatic reversal: growing alarm because climate change was hitting harder and faster than expected and the abysmal failure of political efforts to reduce carbon dioxide emissions. Indeed, since world leaders signed the Rio Convention on Climate Change in 1992, global emissions climbed from 6.1 billion metric tons of carbon a year to 8.5 billion tons in 2007. Dismayed by the inaction, Paul Crutzen, a Nobel laureate, published a controversial paper in August, 2006 that opened the door to the hitherto unthinkable. Since timely and sufficient reductions appeared to be, in his words, “a pious wish,” he urged serious investigation of technological proposals to offset rising temperatures.

For some, geoengineering seemed to hold out another hope: that technology might provide an escape not only from growing heat, but also from the thorny realm of hard choices and difficult international politics. Those politics were on vivid display in Copenhagen this week, as nations have agreed on the gravity of the threat but little else.

The moral and political hazards of geoengineering are as formidable as the physical dangers.

Since the release of Crutzen’s influential paper, many have voiced concerns about possible hazards posed by geoengineering schemes. For example, the artificial volcano projects, which would inject sulfate particles into the stratosphere to deflect incoming sunlight, might reduce the symptom of excess heat, but experience from past volcanic eruptions and climate models indicates that this approach would likely alter rainfall patterns and intensify drought in many regions. And because such sunshade schemes only treat a symptom rather than tackle the cause, this technofix would do nothing to prevent another dire consequence of rising levels of carbon dioxide in the atmosphere — increasing acidity in ocean waters. This acidity jeopardizes coral reefs, shelled marine life, and a tiny plankton Emiliania huxleyi, which plays a key role in the transfer of carbon from the atmosphere to long-term storage in deep ocean sediments.

But the biggest hitch in sunshade remedies involves politics and questions of governance, for they would require an unflagging commitment of centuries: five hundred years or so, or, if we do not make major emissions cuts, even as long as a millennium. If anything were to interrupt this geoengineering effort, which would have to keep replenishing the sulfates every few years, the world would quickly confront a doomsday scenario: Temperatures would suddenly soar upward at a rate 20 times faster than they are rising today, causing unimaginable havoc in human and natural systems and with it, the real danger of human extinction. This institutional challenge is without question a far greater obstacle than any technological difficulties. It is hard to imagine that anyone with even a passing knowledge of human history would think this long-term commitment could be a prudent gamble.

The moral and political hazards of geoengineering are altogether as formidable as the physical dangers. However inviting the prospects shimmering on the technological horizon, geoengineering “solutions” and the promise of a technoï¬x down the road lead us easily into temptation. Indeed, these speculative technologies are already figuring in the political debate and hover in the background of diplomatic discussions, since it will be impossible to limit future warming to 2 degrees C, as G-8 leaders pledged in July, without something like a new technology to suck carbon dioxide from the atmosphere. It is easy to forget that these are proposals, not proven technologies. There is no assurance that any will actually work as imagined.

Even more troubling, these tantalizing prospects can encourage neglect of what can be done now. Former President George W. Bush often used future technology as an excuse for inaction, touting research on hydrogen 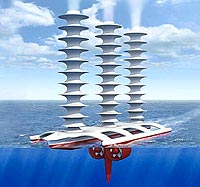 University of Edinburgh
CLICK TO ENLARGE: In one geoengineering scheme, scientists are studying the idea of ships that would spray droplets of saltwater into the atmosphere, making cloud cover thicker and whiter, thus reflecting more sunlight back into space.

fuel-cell “freedom cars” while rejecting proposals to improve the efficiency of today’s vehicles. One energy economist quipped, the freedom car “is really about Bush’s freedom to do nothing about cars today.”

Similarly, longtime climate skeptic Bjorn Lomborg claims that the best, most cost-effective approach isn’t any of the policy proposals on the table in the U.S. Congress or at the Copenhagen conference — for instance, carbon taxes or a regime of cap-and-trade — but rather one of the sunshade technologies that would boost the cooling capacity of clouds by spraying saltwater into the air to stimulate the formation of more cloud droplets.

If Lomborg and his allies in conservative think tanks tout such technofixes as a better “solution” to the climate change, others such as Crutzen and Ralph Cicerone, president of the National Academy of Sciences, see it as an insurance policy in the event of full-blown emergency. They advocate research to distinguish the merely risky geoengineering schemes from the manifestly mad. It is hard to object to a backup plan, especially as the world has not yet halted emissions, much less embarked on the deep reductions that are required.

The promise that something will bail you out if the worst happens encourages imprudent behavior.

Insurance, however, often has a perverse effect: The promise that something will be there to bail you out if the worst happens encourages imprudent behavior. The number of mountain rescues has increased because hikers carry cell phones. The National Flood Insurance Program for people living in coastal communities aimed to discourage development in high-risk areas by providing subsidized insurance if the local government agreed to guide development away from flood-prone areas, but the program instead has increased development in these danger zones. Similarly, geoengineering schemes foster the notion that technology can rescue us from climate hell, if it comes to that, and thereby discourages early, prudent action to head off the worst danger.

The political hazards of deliberate planetary manipulation are as formidable as the moral pitfalls. The technologies that scientists and engineers regard as “insurance” to safeguard the human future may precipitate new kinds of international conflict and the possibility of an arms race in geoengineering technology.

If geoengineering becomes the chosen response, the obvious question is, Who is going to make decisions that are truly global in scope, and how? Who, if anyone, will be approving, overseeing, and policing any use of geoengineering? If the time comes when the Earth needs a sunshade, there must be a guarantee, once started, that it will continue for centuries. If the monsoon fails following some geoengineering effort, there must be some authority to mediate the dispute about what caused it or compensate those who claim damages. As Stanford climate scientist Stephen Schneider has suggested, such claims are inevitable, so it would be unwise to do this without some plan for “no-fault climate disaster insurance” to provide compensation.

And how is it going to be possible to distinguish plain old bad weather from climatological warfare? In a geoengineered world, a catastrophic hurricane or devastating drought can generate suspicion, paranoia, and conflict.

What happens if a single country opts for planetary manipulation instead of reducing emissions?

The planetary system binds us more tightly in a common destiny than the economic system. No one will be secure in a world with runaway warming. Yet governments that willingly concede some of their sovereignty to promote economic expansion will not do the same to protect planetary systems.

In the absence of some means to arrive at a collective decision and provide oversight, all sorts of conflicts and tensions are almost inevitable. What happens if a single country decides to opt for planetary manipulation instead of reducing its emissions? What if other countries object that the project is too risky? If it becomes possible to scrub carbon dioxide from the air and reduce carbon dioxide levels, the question of who gets to choose what kind of climate we want and whether nations should pay to remove their share of past emissions could spark serious disputes.

Until a shift in their rhetoric on climate change six months ago, Russian leaders, for example, were inclined to an upbeat assessment of the benefits of climate change and quick to claim land along with any oil, gas, and minerals lying beneath the no-longer-icebound Arctic. Even if their new-found concern about future warming proves genuine, the Russians might balk at a plan to reduce carbon dioxide levels to 280 to 300 parts per million — a target that would return CO2 levels to what is indisputably the safe range for the climate system. Climate scientist Ken Caldeira judged that it isn’t far-fetched to imagine “some kind of arms race of geoengineering where one country is trying to cool the planet and another is trying to warm the planet.”

The greatest temptation is the naïve hope for a quick fix that will spare us from the difficult challenges of cutting greenhouse gas emissions or finding a way to live together on a shared planet. Even if one of these geoengineering schemes does pan out, be assured that it isn’t going to prove either simple or a “solution.”