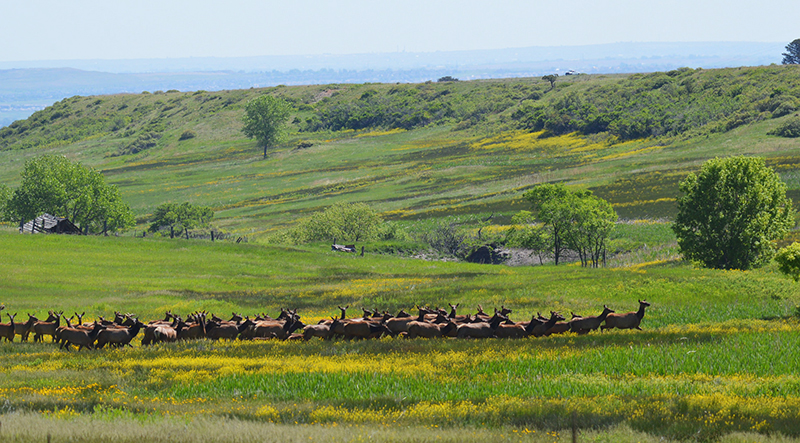 Elk in Rocky Flats National Wildlife Refuge, which is set to open to the public next year.USFWS

A barn owl bursts from the tall prairie grasses. Elk skitter among cottonwood trees near an old stagecoach halt. A shrew crosses a track and hurtles into milkweed, where monarch butterflies feed. Somewhere amid the rare xeric grasses are coyotes, moose, mule deer, a handful of endangered Preble’s meadow jumping mice, and more than 600 plant species.

The place is undeniably beautiful, one of the best exurban wildlife reserves in the United States, an oasis of prairie biodiversity on the outskirts of Denver. And the federal government is preparing to open it up to the public as early as December 2017, once the visitors’ center is built and the planned nearly 20 miles of biking and hiking trails are complete.

But I had a question. Was it safe to allow the public in? What about the plutonium in the soil, and the prairie dogs, rabbits, and earthworms that will assuredly bring more of it to the surface before long?

In a previous life, Rocky Flats was a secret place, where over almost four decades Dow Chemical and Rockwell International, as contractors working for the U.S. government, turned plutonium from military reactors into an estimated 70,000 grapefruit-sized triggers at the heart of hydrogen bombs. Few installations were as important during the Cold War as the Rocky Flats Plant, which operated from 1952 to 1989. And by all accounts, preventing plutonium pollution of the surrounding environment, including that of the people of Denver, was low on the list of priorities.

“The lands comprising this refuge are suitable for unlimited use and unrestricted exposure,” concluded one government report.

“Rocky Flats is unique,” said Lucas, project manager of the refuge, with evident pride. Due to its use as a military facility, the prairie ecosystem has been protected from grazing cattle or agriculture, allowing it to thrive. It contains one of the last stretches of tall xeric grasses on the Rocky Mountain Front Range. Now, with a $7-billion clean-up of the core industrial area at Rocky Flats completed, Lucas says the former buffer zone that houses the wildlife refuge is ready to open its gates to human visitors.

Others are not so sure. In nearby Boulder recently, I sat round a kitchen table with half a dozen scientists — chemists, meteorologists, engineers, and hydrologists — some of whom became opponents of the plant after having conducted research in the area for government agencies. They told me that the public should be permanently prevented from setting foot anywhere near Rocky Flats because of the risks from the millions of tiny particles of plutonium in the soil — any one of which, they said, if breathed in might lodge in your lungs, irradiating and ultimately killing you.

According to government regulations, an acceptable level of plutonium in soil for someone working full time on the Rocky Flats site, or visiting the site daily, is 9.8 picocuries per gram of soil.

When sampled by the U.S. Department of Energy in 2006, soil in the wildlife refuge had an average radioactivity of 1.09 picocuries per gram, rising to an average of 3.2 picocuries in areas downwind of the production areas.

In a letter to the U.S. Fish and Wildlife Service in 2011 summarizing the soil survey, federal and state environmental officials concluded that “the lands comprising this refuge are suitable for unlimited use and unrestricted exposure.” 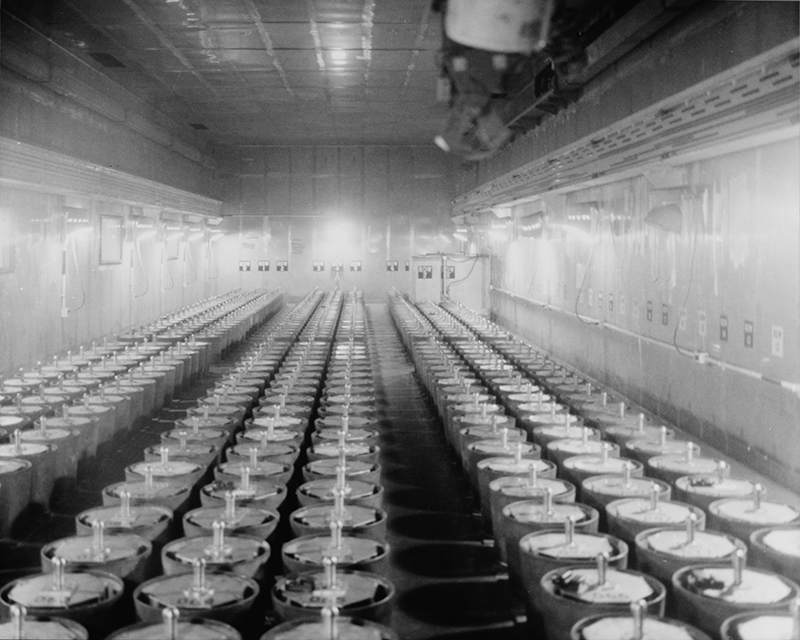 Containers of plutonium metal ready for sorting and distribution for use at Rocky Flats in 1988. NATIONAL PARK SERVICE

But biologist Harvey Nichols, whom I spoke to in Boulder, said the government’s sampling regime was unlikely to have identified hotspots in surface soils; nor did its safety standards account for the risk of ingesting plutonium, which could irradiate organs. “If they open the refuge, children will be exposed to plutonium. Why would we do that?” asked LeRoy Moore, co-founder of the Rocky Mountain Peace and Justice Center and a long-time opponent of opening up the former weapons site.

Behind some of this wariness lies deep suspicion about what secrets may lie hidden at the Rocky Flats plutonium plant. It has a murky history of rule breaking and disregard for the basics of handling nuclear materials.

There were frequent fires in the plutonium handling areas, caused by spontaneously combusting plutonium. The biggest was in 1957. Kept secret at the time, it burned out the stack filters and released about a pound of plutonium in smoke, much of which rained out over what is now the wildlife refuge, and in lesser quantities across several Denver suburbs. Plutonium inventories at the plant showed discrepancies that sometimes reached more than 100 kilograms a year. By the time Rocky Flats closed, an estimated 1.2 tons of the deadly metal could not be accounted for. There was also widespread dumping and spraying of plutonium-contaminated wastes on land around the facility, some of which got into local creeks or was whipped up by the wind. There were allegations of illegal incineration of plutonium waste that led to a notorious FBI raid in 1989, after which the site was shut down.

A federal grand jury sat for three years to hear evidence from the FBI raid. Two days after the jury handed down its indictment, a plea bargain was struck between the U.S. Justice Department and Rockwell — the private contractor then running the place — which resulted in guilty pleas for minor charges, but with the evidence and grand jury conclusions being sealed forever.

Today, Rocky Flats has ostensibly been rehabilitated. Decommissioning of the plant began in 1992. The 10-year cleanup, funded by the federal government, was completed in 2005 — “the largest and most successful environmental cleanup in history,” according to government officials.

The cleanup, carried out by the Department of Energy (DOE) and its contractors, required the removal of six plutonium processing buildings and some 800 other structures; the removal of 500,000 cubic meters of radioactive waste, much of it to off-site Department of Defense facilities; and the cleanup of 88 landfills and other sites across the core production area.

But to cart away all the infrastructure, buildings, and contaminated soils would have cost $37 billion and taken 65 years, the DOE estimated. Congress approved a budget of $7 billion. The 1,300-acre core area where manufacturing took place remains cordoned off and under the control of the Department of Energy. Surrounding that core is the former buffer zone that will comprise the new nearly 5,000-acre wildlife refuge. The government has deemed the area safe without further remediation.

The transition of the Rocky Flats Plant from a nuclear weapons site to a wildlife refuge. USFWS/YALE E360

The Fish and Wildlife Service now leads guided tours for birdwatchers and others. Local municipal and county councils have voted their support for opening up the wildlife refuge that surrounds the core plant area to the wider public, and linking its trails to others in the area. Only one, the Superior town council, has objected to the plan. “It’s easy to scare people about Rocky Flats,” David Abelson, executive director of the Rocky Flats Stewardship Council, a consultative body, told the Denver Post last year. “But the data don’t bear out that fear.”

Meanwhile, neighbors are moving in as metropolitan Denver expands across what was once ranch land. Directly over the fence from the refuge is the new town of Candelas, which when finished will comprise about 1,500 houses. The developer’s website talks of the “magnificent sweep of mountain pastureland” provided by its neighbor.

On my tour with Lucas, we drove along the chain-link fence separating the core and buffer zones, past the sites of covered-over landfills; past the notorious 903 pad, where thousands of 55-gallon drums of fluids laced with plutonium were stored during the 1960s, corroding and leaking into the ground; and past grassy areas where liquid wastes containing plutonium were sprayed across the land. Nobody can say for sure how much of the missing plutonium might still be lurking in such places. Official estimates suggest they might be measured in tens of grams. But those estimates could be orders of magnitude too low, wrote Thomas Cochran, a former nuclear physicist at the Natural Resources Defense Council.

Since flooding in 2013, tiny amounts of plutonium have been found in creeks that drain from Rocky Flats.

The concerns are not limited to the refuge itself. There is plenty of plutonium offsite, thanks to a combination of sloppy practices onsite and the high winds for which the area is notorious. In 2010, one researcher discovered high concentrations of plutonium in dust in the crawl space under a local home. Researchers have concluded that smoke from a series of fires and plutonium blown from waste holding areas were probably the main sources. Peer-reviewed studies have found high rates of lung and brain cancers, leukemia, and other diseases among workers at the plant.

More than two decades after its operations closed, the legacy of Rocky Flats lingers in the public mind in Colorado. In May, a local citizens action group, Rocky Flats Downwinders, launched a call for people who lived near the site to come forward if they think they may have suffered illness as a result of its operations. So far, says Downwinders activist Alesya Casse, the group has received more than 3,000 responses. Rocky Flats Downwinders says the government has done no comprehensive epidemiology to assess health impacts from the known releases of plutonium into their communities.

The main trouble with plutonium is that it remains a hazard for tens of thousands of years. The half-life of the main isotope found at Rocky Flats, plutonium-239, is 24,100 years. Even if most of what remains is in contaminated buildings that are currently buried, will it stay that way? Critics of the refuge fear not.

In 2013, major floods caused extensive soil slips on hillsides within the core area. More earth movements followed rains last winter, leaving ugly gashes on grassy slopes, as I saw during my visit. The DOE’s custodian at Rocky Flats, Scott Surovchak, told me the slides I saw were on the site of a landfill that operated from 1952 to 1968, which probably only contains “construction debris, office and cafeteria waste.” But at least one barrel of radioactive material is recorded as having been removed from the landfill. Since the 2013 floods, tiny amounts of plutonium and americium (a decay product of plutonium-241) have been found by monitors in the creeks that drain from Rocky Flats toward the South Platte River.

For now, such matters are not major concerns for the Fish and Wildlife Service, which has managed the land since 2007.

German Chancellor Angela Merkel’s 2011 decision to rapidly phase out the country’s 17 nuclear power reactors has left the government and utilities with a massive problem: How to clean up and store large amounts of nuclear waste and other radioactive material. READ MORE

Lucas remains confident about opening up the refuge to visitors. On the other side of Denver, he already manages wildlife at the Rocky Mountain Arsenal, a former chemical weapons production site that opened to the public in 2011. He anticipates Rocky Flats could attract up to 150,000 visitors a year.

“We need to get people out here on the refuge, then the fears will evaporate,” he says. But that is just what worries critics of the government plan. Forgetting about the plutonium is the worst thing that could happen, they claim. “What happens after fences fall and memory fades?” asks Moore.

We are left with a conundrum: Is Rocky Flats a brilliant urban wildlife resource, or a dangerous radioactive legacy? The weird but inescapable truth is that it is both.