In October 2008, scientists with the Royal Botanical Garden at Kew discovered a rich pocket of biodiversity, including several notable new species, in a remote highland forest in Mozambique. Trekking into the inaccessible, 17,000-acre region, botanists and biologists found 200 types of butterflies, hundreds of plant species, and numerous animals and insects, including three new species of Lepidoptera butterfly and a new member of the poisonous Gaboon viper family.

What’s significant about this find is that it was initiated not by some intrepid adventurer, but rather by a scientist sitting behind his computer. Three years prior, conservationist Julian Bayliss identified the site — Mount Mabu — using Google Earth. Bayliss, a Tanzanian ecologist, then helped plan and lead the expedition.

The use of Google Earth to make a virtual discovery, which then led to an actual one, is just the latest example of how the spread of satellite technology — and related computer applications such as Google Earth — are changing the way scientists, conservationists, and ordinary citizens are monitoring the environment and communicating their findings to the public.

Once the exclusive domain of the military, government officials, and specialized scientists, satellite technology is being democratized and is fast becoming an indispensable tool for researchers across a wide spectrum of environmental fields. In the past several years, one of the chief uses for satellite imagery has been to accurately quantify the loss of tropical forests from the Amazon, to the Congo, to Indonesia. In Brazil, scientists and state environmental protection officials can now monitor fires and forest clearing almost in real-time and take action to combat the deforestation. 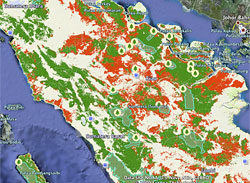 But perhaps the most revolutionary advance in using satellites to monitor the planet has been the ever-widening use of remote sensing technology by ordinary citizens. Google Earth has been instrumental in this development and represents a critical point in its evolution, allowing anyone with an Internet connection to attach data to a geographic representation of Earth. Citizens and environmental groups are now using Google Earth to tracks threats to pristine rivers from hydroelectric projects, catalogue endangered species, help indigenous people in the Amazon protect their land, and alert citizens and government officials that boats are illegally fishing off the Canary Islands.

“A decade ago, high-resolution satellite imagery for the whole planet would have been accessible only to a handful of people working in government agencies, resource extraction, or as scientists,” said David Tryse, an Internet technology specialist — and ordinary citizen — who has developed numerous Google Earth applications now being used by scientists and conservation groups. “Today it is in the hands of millions of people. It’s impossible to care about something if you don’t know it exists, but now people can fly across the planet and zoom in to see for themselves the huge fires from Shell’s gas-flaring operations in the Nigerian delta or follow the discolored toxic runoff along a hundred kilometers of rain forest river downstream from a goldmine in Peru or Indonesian Papua.”

The first launch of a non-weather satellite for civilian use occurred in 1972, when NASA put Landsat into orbit to monitor the planet’s landmasses, tracking everything from desertification to changes in agriculture. Since then, ever-more sophisticated satellites have used cameras and a variety of sensors — including passive microwave, which can penetrate clouds to image the earth’s surface, and infrared sensors that can measure temperatures — to monitor a host of physical processes. One of the key functions has been the use of passive microwave technology to chronicle the steady decline of Arctic sea ice over the past 30 years.

Today, many countries use satellites to monitor their environment, including Brazil, which has one of the world’s most sophisticated systems for tracking deforestation. Brazil uses two systems that can rapidly identify where forest loss is occurring, giving the country’s environmental protection agency the technical capacity — although not necessarily the political will — to combat deforestation as it happens. Those systems rely on optical sensors and thus cannot see through clouds, but Brazil will soon launch its own earth observation satellite with cloud-penetrating technology, known as LIDAR.

Now people can fly across the planet and zoom in to see for themselves.

Greg Asner of the Carnegie Institution’s Department of Global Ecology at Stanford University has used advanced LIDAR technology to scan a Hawaiian forest and identify alien plant species by their canopies and the amount of ground plants that grow under them.

A new frontier for remote sensing is the emergence of REDD (Reducing Emissions from Deforestation and Degradation), a mechanism for compensating tropical countries for conserving their forests. To date, one of the biggest hurdles for the concept has been establishing credible national baselines for deforestation rates — in order to compensate countries for “avoided deforestation,” officials must first know how much forest the country has been clearing on a historical basis. For the remote sensing community, REDD presents an opportunity to showcase the power of remote sensing and generate a source of funding for countries to improve their sensing capabilities.

Introduced in 2005, Google Earth — which can be downloaded for free — aggregates and organizes satellite imagery, aerial photography, and three-D global information system data from a range of sources and presents it in a format that is easily accessible to the general public. Through KML, Google Earth’s programming language, users “interact” with the planet, attaching images and other information to geospatial data. This makes Google Earth an ideal tool for conservationists, such as the group Save the Elephants, which tracks the movement of elephants across Africa to see where they come into conflict with humans and where they forage. To further such conservation goals, Google has developed its Outreach program, an initiative that works with nonprofits to develop tools using Google Earth. 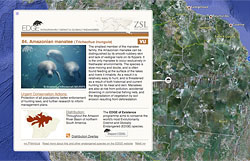 EDGE — Evolutionarily Distinct and Globally Endangered — takes viewers to the locations of 100 of the worlds most endangered mammal species. GOOGLE EARTH

Part of the inspiration for Google Earth Outreach came from within the company itself. Rebecca Moore, a programmer at Google, used Google Earth to document a planned logging project near her home in Santa Cruz County, Calif. Working with members from her community, Moore created a virtual map of the area that would be affected. Her subsequent data animation, which took users on a virtual flyover across the proposed logging zone, generated a firestorm of protest and led to the cancellation of the project. Google Outreach was established shortly thereafter, in June 2007, with Moore in charge.

“Because Google Earth provides, for many areas, such a realistic model of the real earth, you almost feel as if you are on that mountaintop or looking over that valley,” said Moore. “This immersive experience enables conservation organizations to convey complex environmental issues more quickly and persuasively to busy decision-makers, the media and the general public.”

Many scientists have begun to adapt Google Earth technology to their research and their communications with the public. The technology also has emerged as an effective way to publish scientific results in an accessible and meaningful format. While Google Earth is not going to replace scientific journals, it offers a concise, visual format for presenting research that can be more compelling than data points on a chart, rows in a spreadsheet, or a 4-color map.

Mark Mulligan of the Environmental Monitoring and Modeling Group at King’s College London has capitalized on the power of Google Earth to create
HealthyPlanet.org, an initiative that allows people to virtually see, and sponsor, a specific piece of many of the planet’s 77,000 protected areas. His group also worked on an application, Costing Nature, that allows users to trace stream flow in an urban area back to the protected area where it fell as rainfall, providing a potent example of the value of ecosystem services. In addition, Mulligan’s team has developed Google Earth applications examining the impact of oil production in the Ecuadorean Amazon and the distribution of tropical cloud forests.

Google Earth allows these conservation organizations to look at their projects from space.

“Traditionally remote sensing data have been difficult to get hold of, difficult to process, and beyond the means of many of the smaller conservation organizations,” said Mulligan. “Google Earth allows these organizations to look at their projects from space and draw upon a wealth of environmental data, in addition to the imagery. Clearly, conservation needs good professionals working with communities on the ground, but it also needs to harness the significant body of interested citizens who can do their bit.”

Google Earth is also being used for original research. One study, published in the Proceedings of the National Academy of Science last year, was based on an analysis of 8,510 cattle spotted in Google Earth images of 308 pastures and plains around the world. Surprisingly, two-thirds of the cattle — as well as a majority of 3,000 grazing deer monitored in satellite photos from the Czech Republic — tended to align themselves with the Earth’s magnetic field lines, in a north-south direction. The research employed satellite technology to spot a phenomenon that literally had been hiding in plain sight for millennia: that large, non-migratory land animals were affected by the earth’s magnetism. (Earlier studies had established that magnetism guided the long-distance migrations of birds, fish, butterflies, and animals.)

Among the ordinary citizens who have been most active in marshaling the power of Google Earth for environmental work is David Tryse. His interest in conservation led him to develop an application for the Zoological Society of London’s “EDGE of Existence” program, an initiative to promote awareness of — and generate funding for — 100 of the world’s rarest species. His application allows people to surf the planet to see photos of endangered species, information about their habitat, and the threats they face. Tryse also has used Google Earth to track deforestation worldwide, highlight hydroelectric threats to Borneo’s rivers, map global biodiversity hot spots, and monitor encroachment on the lands of isolated, indigenous tribes around the world.

In the Amazon, Indians log onto Google Earth to see where new gold mines are popping up.

The Jane Goodall Foundation, a partner in a project known as Google Earth Outreach, uses Google Earth three-dimensional images to show Tanzanian villagers that forests are the source of their water and to enlist the villagers in identifying chimpanzee habitat and elephant paths.

One of the first Google Earth Outreach projects involved indigenous tribes in the Amazon rain forest. Facing an onslaught of threats to their lands and culture, the tribes have embraced advanced technology as a means of protecting and better managing their homeland. The tribes — including the Surui in western Brazil and the Wayana and Trio in Suriname — are using GPS to map their lands, plot rivers, sites of spiritual significance, and their resources, including medicinal plants and rich hunting grounds. The Rainforest Foundation UK and the Global Canopy Program are taking a similar approach in Congo and Cameroon, respectively, helping communities map their lands to protect against illegal logging and other forms of encroachment.

“Google Earth is used primarily for vigilance,” said Vasco van Roosmalen, Brazil program director for the Amazon Conservation Team, an organization that has coordinated the Google Earth project with the tribes. “Indians log on to Google Earth and study images, inch by inch, looking to see where new gold mines are popping up or where invasions are occurring. They can see river discoloration, which could be the product of sedimentation and pollution from a nearby mine. They are able to use these images to find the smallest gold mine.”