Ben Miner picks his way over slick cobble on the shore of Bellingham Bay, in northwestern Washington. He has brought me to his study site here to show me something that has become increasingly rare on the west coast of North America: a healthy community of sea stars.

He stops now and again to point them out, clustered among the rocks or in skirts of algae. They are all Pisaster ochraceus, the ochre star, and colored a deep, hale purple. “No signs of wasting,” he says. “Yet.” At a site only a few miles from here, almost all of the sea stars are gone because of disease, and those few still alive are withered and falling apart.

As Miner would later discover, the disease would soon spread to the unaffected stretch of Bellingham Bay that he had taken me to see. 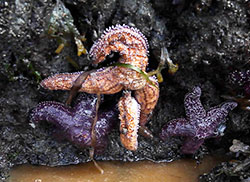 A biologist at Western Washington University, Miner is one of many scientists keeping an anxious eye on a disease that is decimating populations of sea stars — commonly known as starfish — along both the east and west coasts of North America. Called sea star wasting syndrome, it leaves sea stars looking, in Miner’s words, “sick and deflated” until they disintegrate and die. Death can come quickly; in some species, the time from beginning (with the appearance of white lesions) to end (when all that remains is the ghostly white outline of a former sea star) might be as little as 24 hours. As Miner says, “It’s like their tissues just melt away.”

Sickened stars have been found from Alaska to northern Mexico. Entire assemblages have been decimated in Seattle, Monterey Bay in California, and Vancouver, British Columbia. On the east coast, mass die-offs have been observed from New Jersey to Maine. In all, hundreds of thousands of sea stars, if not millions, are thought to have died. “This is the largest epidemic we have ever experienced in the ocean,” says Drew Harvell, a marine epidemiologist at Cornell University who studies the ecology of wildlife disease.

Similar outbreaks are not uncommon and have affected species ranging from oysters to abalone.

Outbreaks similar to sea star wasting syndrome are not uncommon, and in recent decades have affected species ranging from oysters to abalone.

The cause of the sea star epidemic is still unknown, although scientists are narrowing their focus to a few potential suspects, including some type of pathogen. Still, a key contributing factor, they believe, might lie in the warming waters of the Pacific Ocean. In this, the deaths of the sea stars might hint at larger, more troubling questions about the overall health of oceans.

“Sea stars are clearly sentinels,” Harvell says. “Something has changed in the marine environment to lead to this unprecedented scale of an outbreak, and we’re working very hard to understand the pieces.”

But, as she and her colleagues are finding, there are a lot more knowledge gaps than there is knowledge.

Sea star wasting syndrome is not wholly unknown, with outbreaks occurring in 1978, 1982, and, most recently, in 1997. But those events, while severe, were highly localized. They were also seasonal: The syndrome would appear in the spring or summer, wreak havoc for a few months, and then seem to burn itself out when winter arrived, most likely as marine waters cooled.

The current event, on the other hand, is behaving in ways that have both alarmed and baffled scientists. Its geographic breadth is exceptional, as are the number of sea star species it affects, which is significantly greater than in the past. (More than 20 are susceptible; of those, six are highly vulnerable, with mortality all but assured once symptoms appear, according to Miner.) But there is also the curious fact that wasting syndrome seems to have moved from north to south, rather than the other way around.

“Before, we knew it was going to move from south to north, and we knew it was going to shut off in the winter,” says Peter Raimondi, the chairman of the Department of Ecology and Evolutionary Biology at the University of California-Santa Cruz. “It used to be almost orderly.” No longer — wasting syndrome has instead persisted through the winter, and ramped up again in the spring.

Biologists suspect this is due to seasonal increases in marine water temperatures. Warm water stresses marine organisms, making them more susceptible to disease, and wasting syndrome has taken advantage of this before. Investigating a small outbreak on Vancouver Island in 2008, Amanda Bates and her colleagues at the University of British Columbia showed that higher water temperatures facilitated the syndrome’s spread. (A graduate student of Harvell’s is studying the relationship between sea star mortality and water temperature; there appears to be a link this time, too.)

Sea stars will thus most likely face months of continued pathological assault before winter brings any possibility of relief. “There’s a prediction of a strong El Niño event developing,” Raimondi says. “If that happens, things are going to be bad.”

He worries that, with an influx of additional warm water because of El Niño wasting syndrome could take out pockets of sea stars thus far unaffected. And that may be just the beginning. “To date, no evidence suggests that the disease has jumped to other species, like sea urchins,” he says. “But during warm water events, I would not be at all surprised to see it move between species.”

All of this means it is vital to find the syndrome’s cause. “If we can understand where it came from, how it spread, what it does, then we’ll have more tools next time,” Harvell says. To do this, she and Miner are working with Ian Hewson, a biological oceanographer at Cornell University, engaging in a bit of genetic sleuthing. With samples from both sick and healthy sea stars, Hewson amplified DNA from everything present in their tissues. Then he looked for sequences unique to ill sea stars. From this, he came up with a shortlist of possible bacterial and viral agents.

“There was one particular sequence associated with sick individuals — a densovirus,” Miner says. Hewson had previously shown that densoviruses cause a disease similar to wasting in sea urchins, which are close relatives of sea stars. It was the first time a virus that affected echinoderms — the phylum to which sea stars and sea urchins belong — was described.

‘We could see whole communities restructured — the effects could be significant,’ says one scientist.

Whatever the exact agent turns out to be — Harvell expects the results will be published within a few months — the rise of sea star wasting syndrome continues what in recent decades has become a worrisome, more general pattern: The increasing spread of marine pathogens.

In the late 1940s and 1950s, two protozoans began to infect populations of eastern oysters, beginning in the southeastern U.S. Called, respectively, Dermo disease and MSX disease, both have crept steadily north as temperatures of marine waters have risen, and now reach into Maine. Scientists say that oyster populations have developed some resistance to the disease and are growing in many regions.

More recently, a withering disease appeared in communities of black abalone in California, in 1985. First detected following a strong El Niño, the disease spread through both farmed and wild abalone populations, eventually affecting red and white abalones, as well. Both black and white abalones were listed under the Endangered Species Act, due in part to losses from withering disease. The cause turned out to be a bacteria that infected the abalone’s digestive tract. Black and white abalone populations have yet to recover. They also have been heavily overfished.

Scientists fear the same dynamics of eradication and slow recovery could play out with sea stars. “We could see whole communities restructured,”

Miner says. “The ecological effects could be pretty significant.”

Sea stars are justly famous as a so-called keystone species and the focus of a groundbreaking experiment in ecology. Working on an island off the northwestern tip of Washington in 1963, Robert Paine, an ecologist at the University of Washington, removed all the ochre stars from a patch of the rocky intertidal zone. He then waited as the community responded to the abrupt absence of the sea stars, which are formidable predators.

In the end, with sea stars no longer keeping them in check, mussels dominated the site, and from this Paine conceived of the keystone species concept — the idea that a single organism can effectively shape an entire species assemblage in ways disproportionate to its own abundance.

“In a way, we’re seeing a replication of that experiment,” Miner says. “It’s not like another predator is going to come in and replace sea stars.”

For his part, Miner continues to walk the shores of Bellingham Bay. These days, though, he has much less to look at. A couple of weeks after I was with him, he returned to the site we had visited to find telltale white lesions on the arms of the ochre stars there. Soon after that, all the sea stars were dead.