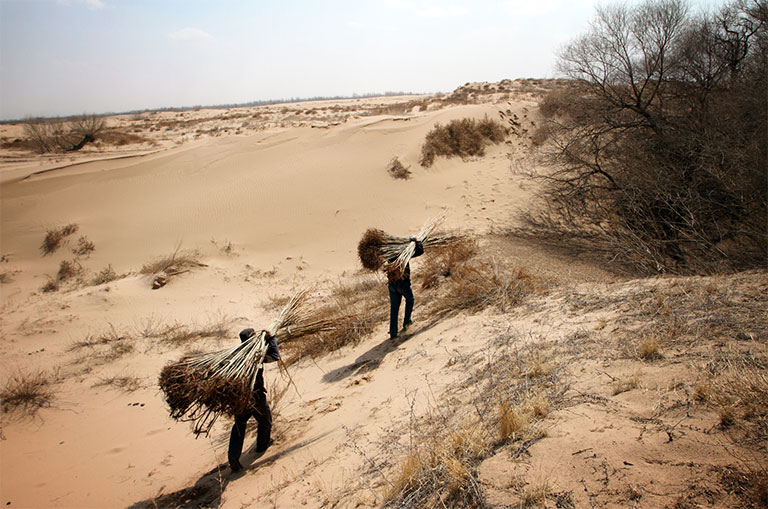 Sean Gallagher
Workers with a conservation group carry tree saplings to be planted on the fringes of a desert in Inner Mongolia. View the photo essay.


Photographer Sean Gallagher has lived and worked in China for seven years, visiting nearly all of its provinces as he documents the country’s daunting ecological problems and its widely varied landscapes. In a Yale Environment 360 photo essay, the Beijing-based photojournalist chronicles China’s widespread water and air pollution, the battle against the desertification that has spread across the country’s northern regions, and the threats to the nation’s biodiversity.

“The current state of many of the country’s ecosystems is really quite dire,” says Gallagher. “The general public is starting to wake up to the crisis at hand, but I fear it’s too late. China’s rise has caused irreparable damage in many places.”

ABOUT THE AUTHOR
Sean Gallagher is a Beijing-based British photojournalist and videographer. These photographs were taken on assignments funded by grants from the Pulitzer Center on Crisis Reporting. The center has published an e-Book of his photos, Meltdown: China’s Environment Crisis.


Photo Essay: Tracking the
Himalaya’s Melting Glaciers
The Glacier Research Imaging Project, which David Breashears helped found, has retraced the steps of some of the world’s greatest mountain photographers as they took pictures across the Himalaya and the Tibetan Plateau. Breashears then returned to those same vantage points and took photographs that bear witness to the rapid warming of the Himalaya and the swift retreat of its glaciers.
READ MORE

China’s Looming Conflict
Between Energy and Water
In its quest to find new sources of energy, China is increasingly looking to its western provinces. But the nation’s push to develop fossil fuel and alternative sources has so far ignored a basic fact — western China simply lacks the water resources needed to support major new energy development.
READ MORE

China’s Ma Jun on the Fight
To Clean Up Beijing’s Dirty Air
Chinese environmentalist Ma Jun played an important role in a successful effort to force the government to more strictly monitor air pollution in Beijing. In an interview with Yale Environment 360, he talks about the daunting challenges of China’s anti-pollution battle and how social media is helping lead the fight to improve the nation’s air.
READ MORE