On June 13 the U.S. Fish and Wildlife Service published a proposal to remove Endangered Species Act protection for all wolves in the contiguous states save about 75 of the Mexican subspecies in Arizona and New Mexico. There’s now a 90-day public comment period, and the service is being torn apart like a geriatric moose.

The 40-year-old Endangered Species Act (ESA) was humankind’s first meaningful effort to preserve the planet’s genetic wealth. It has been a beacon for the world, inspiring similar statutes in other countries and serving as a blueprint for the Convention on International Trade in Endangered Species. 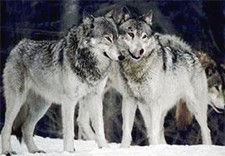 When a species is out of danger it must be “delisted” so that limited resources can be allocated to species in real trouble. Most U.S. wolves south of Alaska are in the northern Rockies (Montana, Idaho, and Wyoming) and the Lake States (Minnesota, Wisconsin, and Michigan), and they’ve already been delisted. But is the Fish and Wildlife Service right when it says it’s time to delist the rest? It could not be more wrong, say many conservationists and some wildlife biologists.

“Scientific chutzpah” is how environmental journalist James Gibson defines the agency’s questionable assertion that wolves once extant in the Northwest and East were genetically distinct from the wolves living in the northern Rockies and Lake States, which were the ones originally listed under the ESA and delisted during the last three years. This way the service can claim that formerly listed wolves are recovered in “nearly the entire historical range.”

“Playing politics with the Endangered Species Act is not just okay — it’s essential.”

Michael Hutchins, who retired last year as director of the Wildlife Society, calls for “better science” and objects to wolves being “delisted out of political expediency.”

“This decision could derail wolf recovery efforts in areas around the country where it has barely begun,” warns Defenders of Wildlife.

I can’t dispute any of this. But as the fur flies it’s time to reflect on what the Fish and Wildlife Service has been up against and what it has accomplished. Playing politics with the ESA is not just okay; it’s essential. And the agency’s brilliant politicking over the last 30 years is the reason wolves in the northern Rockies and Lake States really are recovered.

That recovery seemed hopeless in the late 1980s when I became an adviser to the Wolf Fund — the group that did more than any other NGO to return wolves to Yellowstone National Park. Western politicians were citing data from the Brothers Grimm. Wyoming Senator Alan Simpson, for example, proclaimed that “wolves chase women in Russia”; Montana Senator Conrad Burns assured the public that “there’ll be a dead child within a year.” The states perceived a plot to drive ranchers off public land.

But one winter night in 1995 I turned on the TV and there were Interior Secretary Bruce Babbitt and Fish and Wildlife Service director Mollie Beattie carrying a caged wolf, the first of 66 trapped in Canada, into Yellowstone National Park where it was released. How could this have happened?

It happened because the service played politics. Under an ESA provision it designated the transplanted wolves a “non-essential experimental population,” thereby allowing ranchers to shoot any that ranged outside the park and were seen attacking livestock — this to the general horror of the environmental community. But Babbitt, Beattie, and their biologists understood that without such designation wolf recovery was politically impossible. Moreover, they understood that livestock predation is unnatural wolf behavior passed on to offspring; and they wanted offending animals out of the breeding population.

Wolf lovers have been no less a threat to recovery than wolf haters.

As wolves spread through Yellowstone and beyond ranchers noticed that sheep losses were down. That’s because coyotes are naturally more numerous than wolves, and wolves are the only form of coyote control that ever worked. In the park’s Lamar Valley, coyotes had consumed 85 percent of the mice; but by killing or evicting most of the coyotes the wolves returned that food base to an enormous array of other predators including foxes, weasels, badgers, owls, and hawks. As wolves ran overabundant elk out of riparian areas, aspen, cottonwood, and willow regenerated and with them leaf-eating insects that had been the base of a food chain sustaining everything from bats to swallows to trout to otters to ospreys to pelicans.

In addition to ranchers and politicians, the Fish and Wildlife Service has had to contend with wolf-hating hunters. Almost everywhere in current and former wolf range elk and deer are over carrying capacity, damaging wildlife habitat (including their own), and increasingly unhealthy. Wolves instantly sense when animals are incapacitated by disease or parasites, and in culling them they reduce mortality by reducing transmission. But the Rocky Mountain Elk Foundation, to cite just one example, campaigned for wolf killing on behalf of its hunter donors to the point that the descendants of iconic biologist and wilderness advocate Olaus Murie demanded cancellation of the foundation’s Olaus Murie Award because its “all-out war against wolves is anathema to the entire Murie family.”

Wolf lovers have been no less a threat to recovery than wolf haters. In an effort to get full endangered status for Yellowstone wolves, the Sierra Club Legal Defense Fund (now Earthjustice) sued the service on behalf of the National Audubon Society, convincing a federal judge in 1997 to strike down the designation of the Yellowstone population as non-essential. This meant that the wolves had been released illegally and, because Canada didn’t want them back, would have to be killed. Fortunately, the National Wildlife Federation got an appeals court to reverse the judge’s order.

By 2008 the recovery goal for the northern Rockies — Â 100 wolves and 10 breeding pairs in each of the three states (Wyoming, Montana, and Idaho) — had been exceeded by at least 300 percent. But there are some environmental groups that want nothing delisted ever. Leading the pack is the Center for Biological Diversity which sues to list or keep listed everything that traversed Noah’s plank, studied or unstudied, then collects attorney fees from taxpayers. Amos Eno, who worked at the service’s Endangered Species Office crafting the amendments that strengthened the act, contends that the federal government could “recover and delist three dozen species” with the resources it spends responding to the center’s litigation.

A 2011 act of Congress was a horrible, weakening precedent of the nation’s best and strongest environmental law.

Wyoming insisted on classifying its wolves as vermin, but Idaho and Montana came up with management plans the service could live with; so in 2008 it delisted wolves in those two states. Enter the Center for Biological Diversity, Earthjustice, and ten other outfits that prevailed in a lawsuit to prevent delisting on the technicality that populations must be designated by region not by state. This so enraged Congress that it delisted Idaho and Montana wolves itself with a law passed in April 2011. It was the first congressionally mandated ESA delisting — a horrible, weakening precedent for our best and strongest environmental law.

Meanwhile, the service had to play politics with Wyoming, the epicenter of wolf fear and loathing. “The Wyoming law treats wolves like coyotes [that can be shot on sight],” Ed Bangs, then the service’s Western wolf recovery coordinator, told me at the time. “Coyotes can thrive under those conditions, but wolves vanish. The legislature developed this very detailed wolf law, gave it to the state fish and game guys, and said, ‘Okay, make it work.’ The biologists did their best — they really did — but they had to keep going back to the law. And that just ain’t gonna work for us.”

A political compromise imploded after the Wyoming legislature tried to increase the huge “free fire zone” — the part of the state where wolves could be shot even if they weren’t bothering livestock.

Today, there are an estimated 1,674 wolves in the northern Rockies and 4,432 in the Lake States.

So the service continued playing politics, educating, reasoning, cajoling, brandishing its trump card (granting wolves permanent endangered status) like a crucifix in front of a fanged face. Finally, in 2012, the state hatched a plan with the free-fire zone cut down to 85 percent of the state, and wolves in Wyoming were removed from the endangered list. “We’re not happy with it,” says John Kostyack of the National Wildlife Federation. “Is it enough to sink recovery of the Northern Rockies wolves? No. Delisting Wyoming wolves was obviously a political decision.”

Under ESA protection, Minnesota wolves colonized Wisconsin and Michigan until, in 2007, the recovery goal for the three-state population had not only been met but had nearly tripled, requiring delisting. But the Center for Biological Diversity and its allies got a court order blocking this needed, mandated action. So the service fought back, again turning up the politics; and in 2011 it succeeded with delisting. By doing so it preserved ESA integrity, credibility, and funding.

Today, thanks to the U.S. Fish and Wildlife Service and no thanks to the perennial plaintiffs, there are an estimated 1,674 wolves in the northern Rockies and 4,432 in the Lake States. That’s the greatest success story in the history of wildlife restoration.

For Wolves on the Brink, A Hobbled Recovery Plan

Few creatures in the United States have come as close to extinction as the Mexican wolf, which was wiped out in the U.S. by 1970. Now, scientists and conservationists contend, federal officials are caving into political pressure and failing to implement a legally mandated reintroduction plan.READ MORE

But what of the service’s current proposal to delist most wolves currently protected by the ESA? If the plan gets implemented as written, wolves will have trouble recolonizing 25 million acres in Colorado and Utah because they will be unprotected. And the recently reintroduced Mexican wolves will have trouble moving north into unprotected territory. Northern Rockies wolves have already made it to the Pacific Northwest on their own; and while future dispersal to the region (needed to prevent inbreeding) will be difficult, at least Oregon and Washington appreciate their wolves and have classified them as endangered under state regulations. They can manage wolves as well as the federal government.

“The wolf is probably the most politicized species ever,” remarks Kostyack. “It’s not surprising that the service wants to be done with it all.”

Considering all the agency has gone through and all it has accomplished, I don’t blame it. That’s not to say I like its draft plan; I don’t because of the way it impedes natural dispersal. But I and the rest of the public have till September 11 to demand fixes; and the service has shown that it is good at listening.