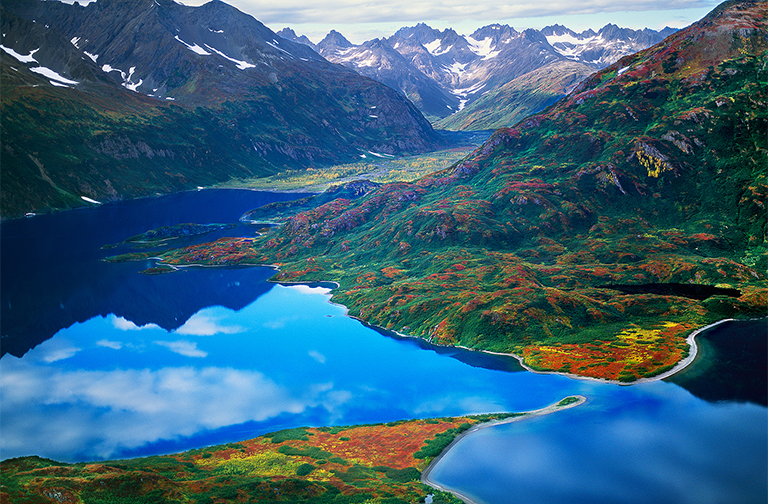 Robert Glenn Ketchum
This highland backcountry is some of the wildest in North America and supports an impressive array of wildlife. View the photo gallery.


The proposed Pebble Mine in southwestern Alaska is a project of almost unfathomable scale. The Pebble Limited Partnership intends to excavate a thick layer of ore — nearly a mile deep in places — containing an estimated 81 billion pounds of copper, 5.6 billion pounds of molybdenum, and 107 million ounces of gold. The mine would cover 28 square miles and require the construction of the world’s largest earthen dam — 700 feet high and several miles long — to hold back a 10-square-mile containment pond filled with up to 2.5 billion tons of sulfide-laden mine waste.

All this would be built not only in an active seismic region, but also in one of the most unspoiled and breathtaking places on the planet — the headwaters of Bristol Bay, home to the world’s most productive salmon fishery. Composed of tundra plain, mountain ranges, hundreds of rivers, and thousands of lakes, the greater Bristol Bay region encompasses five national parks and wildlife refuges, and one of the largest state parks in the U.S.

Landscape photographer Robert Glenn Ketchum first came to this region in 1998, and was immediately captivated by its beauty. He is now part of a broad-based campaign — which includes numerous conservation groups, fishermen’s organizations, and corporations such as Orvis, Patagonia, and Tiffany — to halt the Pebble Mine. Despite a highly critical environmental impact assessment from the U.S. Environmental Protection Agency last year and the defection of major investors, Pebble Mine is not dead, its fate currently wending its way through state and federal courts.

Ketchum is hopeful that his photographs — depicting what he describes as “one of the most beautiful places I have ever had the pleasure of spending time” — may help tip the scales against the gargantuan mine project.

ABOUT THE
PHOTOGRAPHER
Robert Glenn Ketchum, a photographer for 45 years, has done pioneering work in color landscapes. A student of renowned landscape photographer Eliot Porter, Ketchum has published a dozen books and his photographs are displayed in numerous museum collections. For the past 12 years, Ketchum has worked extensively in southwestern Alaska, publishing two books on the region, mounting a traveling show, and playing an active role in fighting the Pebble Mine. He is a founding fellow of the International League of Conservation Photographers.


Along Cuba’s Coast, the Last Best
Coral Reefs in the Caribbean Thrive
Photographer Robert Wintner documents the exquisite beauty and biodiversity of Cuba’s coral reefs, which are largely intact thanks to stifled coastal development in the communist nation.
VIEW THE GALLERY

Focusing a Lens on
China’s Environmental Challenges
In a Yale Environment 360 photo essay, Beijing-based photojournalist Sean Gallagher chronicles China’s widespread water and air pollution, the battle against the desertification that has spread across the country’s northern regions, and the threats to the nation’s biodiversity.
VIEW THE GALLERY