For almost as long as there have been cars, gasoline has been the dominant fuel in transportation. But for a host of reasons — environmental, climate change, public health, and economic — the time has come to consider mixing higher blends of biofuels with gasoline. And in the United States, the best source for that biofuel today, surprisingly, is corn.

Such a suggestion will surely elicit cries of protest from the environmental community: A few years ago there was a flood of articles and reports about the allegedly disastrous ecological impacts of growing crops for biofuels. But we believe that ethanol has been unfairly stigmatized in the conventional wisdom and that the reasons for concern about corn ethanol deserve reexamination.

The revisionist effort to increase the percentage of ethanol blended with U.S. gasoline continues to ignore the major environmental impacts of growing corn for fuel and how it inevitably leads to higher corn prices, writes economist C. Ford Runge. It remains a bad idea whose time has passed. READ MORE

In the U.S., now is the time for that second look. In June, the Environmental Protection Agency will begin a mid-course evaluation of President Obama’s ambitious fuel economy target, established in 2012, to have cars and light trucks reach 54.5 miles per gallon by 2025. Increasing the ethanol blend in gasoline from the current 10 percent to roughly 30 percent would not only help boost gas mileage, it would significantly cut U.S. carbon emissions and air pollution. And because higher-ethanol blends greatly reduce the need to use toxic additives — known as aromatics — to gasoline, increased reliance on ethanol would sharply cut the emissions of deadly fine-particle pollutants.

Today, U.S. sales of ethanol have grown to nearly 15 billion gallons a year, due to the near-universal use of E10 (10 percent ethanol, 90 percent gasoline) to fuel the nation’s cars and light trucks. We maintain that in the U.S., the principal reasons for concern about ethanol — the use of a food crop (corn) as a feedstock and the environmental impacts of high-production agriculture — are no longer valid.

New studies show that, thanks to ever-improving agricultural productivity, the food-versus-fuel debate appears to be over, and the verdict is in: There is no conflict. Increased demand for corn has not dramatically increased the cost of grain. Only a small share of corn is grown for human consumption, and global food prices are more affected by the cost of petroleum than they are by the price of corn. If anything, ethanol, by reducing the demand for gasoline, may lower the price of food by lowering the price of oil.

More corn is grown for animal feed than any other use. The ethanol process takes only the starch from the corn and leaves a high-protein byproduct — dried distillers grains — for animal feed, so cattle are not short-changed by ethanol production, either.

As for the environmental impact of corn, a quiet revolution — aimed at restoring the health of the land — has been taking place on American farms. The iconic image of endless fields of bare, furrowed soil ready for planting in the spring is no longer the norm. More and more farmers are choosing to leave the summer’s residues — corn stalks, for example — on their fields after harvest, injecting seeds into the undisturbed soil in the spring. Some are planting winter cover crops to further stabilize and enrich the land. 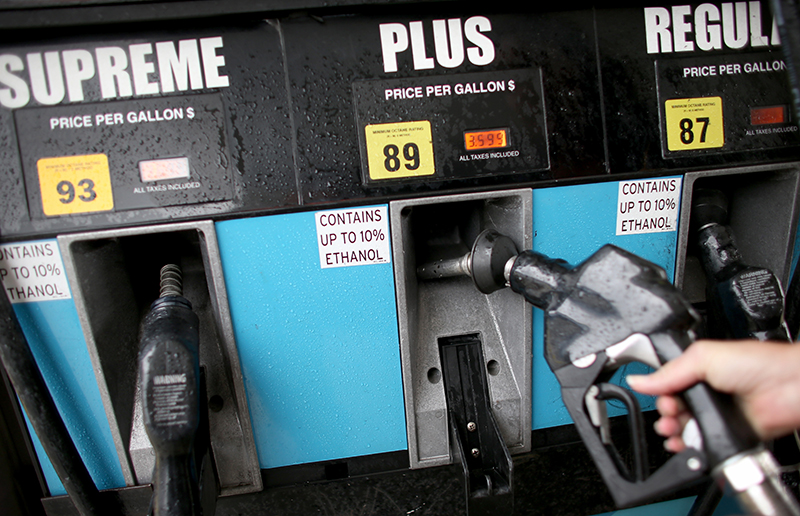 These practices have many names — “no-till” or “low-till” or “precision” agriculture, for example — but they are reversing decades of soil depletion and are turning cropland into a carbon sink. In the process, they enrich the soil with natural carbon and reduce the need for chemicals and water. According to the most recent Census of Agriculture, 62 percent of U.S. cropland (173 million acres) was farmed in 2012 with conservation tillage or no-till practices.

A recent nine-year study conducted in Nebraska by the U.S. Agricultural Research Service found that “no-till” corn increased the amount of carbon in the soil by nearly a ton per acre, per year. The researchers were surprised to find more than half of this captured carbon one to five feet below the surface: Corn has deep and extensive roots, but most previous studies sampled for carbon only to a depth of 18 inches.

The carbon footprint of ethanol has also been reduced, thanks to greater efficiency on the farm and in the production process. According to a team at Argonne National Laboratory, which for the past two decades has assessed the life-cycle greenhouse gas emissions from fuels — from extraction and production to use in a vehicle, taking into account indirect impacts on land use elsewhere — ethanol today results in 37 percent less carbon pollution per mile than gasoline. Adding in the now-uncounted carbon benefits of soil sequestration could potentially yield a zero-carbon fuel. At the same time, gasoline is becoming more carbon-intensive because of the increasing use of tar sands and other oils that are hard to extract and process.

The Obama administration’s fuel economy rule is one of the pillars of the president’s climate legacy, but it does not take into account the carbon content of the fuels in use. Crediting the life-cycle carbon footprint of fuels would provide an economic incentive for ethanol blends and encourage farming practices that enrich the soil by storing carbon: Carbon credits could be based on an annual field-level certification process. Even without those benefits included, the use of “mid-level” blends — up to 30 percent ethanol — would reduce greenhouse gas emissions under the new fuel economy standards by at least 10 percent.

Exposure to fine particle pollution from aromatics in gasoline results in 3,800 premature deaths per year.

In addition, higher ethanol blends are rich in octane, and higher-octane fuels enable automakers to increase the “compression ratio” of an engine without damage from knock — creating more power with less fuel. (Race cars in the IndyCar series use blends of 85 percent ethanol.) Mid-level blends would thus make it easier for automakers to achieve the 2025 fuel economy targets (and go beyond them after 2025), while at the same time delivering more greenhouse gas reductions.

U.S. automakers have advocated for higher octane in fuels while remaining neutral as to the octane source. Designing cars to accept mid-level ethanol blends with a higher compression ratio is a simple engineering task, and many cars that require premium fuel today would require little or no modification. A senior Mercedes-Benz engineer said such a combination would be attractive to car buyers because it would provide “ridiculous power and good fuel economy.”

Currently, oil refiners supply octane through a distilled component of petroleum called aromatics — hydrocarbon chains with a stable benzene ring that resist combustion and prevent engine knock. These aromatics, mostly toluene and xylene, are neurotoxins; they comprise on average 25 percent of every gallon of gasoline, and their emissions are implicated in a variety of serious health impacts, especially affecting the heart and lungs. A 2013 assessment by the Harvard Center for Risk Analysis estimated that exposure to fine-particle pollution from aromatics in gasoline results in 3,800 premature deaths per year and a total social cost of more than $28 billion annually.

Ethanol’s economic value has been widely mischaracterized and misunderstood.

Most worrisome of all are the secondary pollutants that form in the atmosphere after combustion, especially PAHs — polycyclic aromatic hydrocarbons — which are carried along on particles so tiny that, once inhaled, they can penetrate the bloodstream and reach the brain. A careful long-term assessment of women in New York City found a correlation between exposure to PAHs during pregnancy and reduced IQ in their children — an effect similar to that of airborne lead. The study’s leader, Frederica Perera, director of the Columbia University Center for Children’s Environmental Health, calls PAHs “carcinogenic, immunotoxic, neurotoxic, mutagenic, and endocrine disruptors.” The use of mid-level ethanol blends could reduce the content of aromatics in gasoline by 60 percent.

Ethanol’s economic value has been widely mischaracterized and misunderstood. Ethanol does have less energy content per gallon than gasoline, leading some to say that consumers get a bad bargain from its use. In mid-level blends, however, the improved efficiency made possible by ethanol almost completely compensates for its lower energy content, evening out the economic equation.

A more powerful economic benefit for consumers comes from weakened demand for oil. Much has been made of the effect of shale oil from North Dakota on world oil markets, but before it came along, the widespread use of 10 percent ethanol blends already had displaced a similar amount of oil, saving consumers nearly $1 per gallon of gasoline, based on a number of economic estimates. That has meant $100 billion per year for U.S. consumers.

Over the last decade, ethanol production more than tripled, even as federal tax credits for its use and import tariffs were eliminated. This rapid growth in demand contributed to a temporary price spike for corn. But corn prices have since retreated to recent historical norms, putting the lie to the notion that using crops for fuel will make food unaffordable.

The reason is clear: One of American farmers’ most recurrent problems historically has been overproduction. The combination of favorable soils and climate in the Midwest, together with the astonishing innovation that continually increases yields per acre, means that the acreage planted in major crops has remained within a narrow band (315 to 325 million acres) for the last 15 years, despite the increased demand for corn. Indeed, farmers need growing markets just to keep up with their own rising productivity. With a sensible ramp-up, yield increases alone could meet additional demand for ethanol in mid-level blends, using land already in production.

To be ready for widespread use in 2025, the transition of fuels, vehicles, and refueling infrastructure must begin very soon.

The obstacles to this growth, however, are formidable. Once gasoline was established as the only way to move a car, the petroleum industry had a complete monopoly on transportation fuel, reflected in vehicle design and refueling infrastructure. (Electric vehicles may provide a viable competitor one day, but such a fundamental shift in American habits will take a generation or more to achieve. And vehicles that run on electricity will only be as clean as the source of the electricity.)

The successful phase-out of leaded gasoline in the 1990s suggests that the same could be done with aromatics, and the fuel economy rule provides a ripe opportunity. The mid-term evaluation required by the rule will begin with a draft technical assessment this June and conclude with a final rule in April 2018. It will consider a wide range of factors, including developments in powertrain technology, consumer acceptance, and trends in fuel prices. Missing from this list, however, is an assessment of other fuel choices.

Engineers in the U.S. Department of Energy’s national laboratories are examining a large number of different fuel formulations to see which is optimal; clearly, increased levels of aromatics would be unacceptable. A mid-level ethanol blend is the best available alternative today, and the EPA should consider this in its mid-term review.

For automakers to demonstrate the benefits of higher-octane fuels, they need a green light from the EPA to proceed with a mid-level ethanol-blend test fuel that could become the standard for the car designs of the next decade. To be ready for widespread use in 2025, the transition of fuels, vehicles, and refueling infrastructure must begin very soon. The benefits of these blends for octane and performance justify this action on the basis of reduced carbon pollution alone. Beyond that, it is incontrovertible that substituting ethanol for toxic aromatic hydrocarbons will have benefits for public health. Rather than regulating aromatics directly, EPA could simply displace them by encouraging higher ethanol blends.

These benefits to climate and health have emerged through a combination of new practices and new research. The EPA should embrace the opportunity of its mid-term review to support higher-ethanol fuels and the myriad advantages they offer.