On a quiet stretch of coastline along the western shore of the Dead Sea, a sinkhole had swallowed a piece of a road, pulling in concrete and rusted fence posts. The sea lay a short distance beyond, its turquoise-colored waters dropping at the rate of more than one meter a year.

The sinkholes are among the most visible effects of the continuing slow “death” of the Dead Sea, which borders Israel, Jordan, and the West Bank. Thousands of sinkholes have opened up around the Dead Sea’s coastal plain, threatening roads and structures alike. Near this particular sinkhole, a grove of date palms sat withered and dead, abandoned because of the dangerous ground on which they stood. 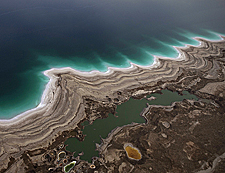 Menahem Kahana/AFP/Getty Images
The Dead Sea’s falling level has created thousands of sinkholes along the coast.
Â
“In the north and west side of the Dead Sea, there are springs, very special habitats, including endemic species, and all of them are under threat,” says Eli Raz, an Israeli researcher at the Dead Sea and Arava Science Center. He notes that this area is on a major route for migrating birds and that the falling sea level is a threat to the oases on the sea’s coast. “Ecology is like a chain,” he says, “you don’t know what will happen in the future after hurting one link in the chain today.”

The Dead Sea continues to drop at an astonishing rate, largely due to water diversions from its main tributary, the Jordan River, to the north. To replenish the sea’s waters, a massive public works project that would import water from the Red Sea has been proposed. A final report from the World Bank on the project is expected soon. But the proposal has faced stiff opposition on environmental and financial grounds, and conservationists have proposed other plans to restore life to one of the world’s great natural landmarks. The Dead Sea is the lowest terrestrial point on the planet, sitting — for the moment — at roughly 420 meters (1377 feet) below sea level.

Raz and other experts who have long watched the Dead Sea’s level drop assumed the decline would stop, or at least slow. The logic went that as the water level fell, the surface area would also diminish, meaning there would be less available water to evaporate. But they underestimated the decline of the flow in the Jordan River, which has dropped by more than 98 percent and is the primary source of new water into the sea.

The idea is to build a series of pipelines and canals that would transport water 112 miles from the Red Sea.

per year from 1993 to 2009. In that period, 725 million cubic meters of water evaporated from the surface every year, while an average — after removing two anomalous years — of only 350 million cubic meters entered due to the Jordan’s nearly non-existent flow and the area’s minimal rainfall. As one drives along the western coast of the sea, fingers of salt-encrusted rock stick out from the shore in many places. They used to be under water.

As the sea drops, groundwater from adjacent aquifers flows in to replace the retreating seawater. This fresh water comes in contact with a layer of rocky salts and dissolves it, creating an underground void. And where there is an underground void, there will soon be a sinkhole.

Raz says he has worked out reliable methods for predicting where the next hole will appear, which has helped prevent buildings, cars, and beachgoers from falling in. But not, alas, Raz himself. “We have at least one sinkhole which is well documented from inside,” he says. “And now I know that no one misses me for 14 hours.” 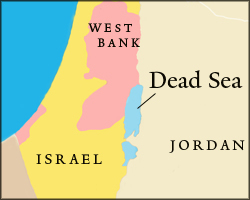 Yale Environment 360
The Dead Sea project would require cooperation between the governments of Israel, Jordan, and the West Bank.
Â
Experts have come up with a number of ideas to “save” the Dead Sea. The most high-profile and long-discussed is the Red Sea-Dead Sea Conveyance, known as the Red-Dead project. The idea is to build a series of pipelines, canals, tunnels, and desalination plants that would bring water about 180 kilometers (112 miles) from the Red Sea, near the southern Israeli city of Eilat, to the Dead Sea, using the gravity of that 420-meter drop to get it there.

By any estimation, this would be a massive undertaking. Early reports suggest it would cost as much as $10 billion, and there are substantial concerns that it would dramatically alter the chemical composition of the Dead Sea. The World Bank began a comprehensive study on it in 2005, and after many delays, the final report is now expected in late August.

Scott Wells, a professor of civil and environmental engineering at Portland State University, participated in one World Bank study of the potential effects of the inflow of Red Sea water on the Dead Sea. Mixing of desalinated brine with the salty Dead Sea water will most likely change the rates of algae blooms (the Dead Sea is far from being actually “dead”), and there could be increases in gypsum formation and other mineral changes, Wells says. For a place that relies heavily on the tourism industry and the reputedly healing nature of its waters, such changes are not trivial, either ecologically or economically. Wells and his colleagues concluded that water from the Red Sea would have to be added to the Dead Sea “very carefully.”

The project also would require cooperation between Israel, Jordan, and the Palestinian Authority, in a region not known for friendly cross-border relations. “It is not so simple to stop the drop,” Raz says. “This is an

Conservationists contend the project is more about providing water for Jordan’s capital than saving the Dead Sea.

international problem, not just for Israel.”

Some critics contend that the whole idea of the Red-Dead project is a pretext to transport water from the Red Sea hundreds of miles north to Amman, the Jordanian capital, which is facing a serious water shortage. By framing the idea as an effort to save a cultural landmark, Jordan may receive financial help from the international community to build a badly needed water pipeline and desalination plant, says Yaakov Garb, a professor at Ben-Gurion University of the Negev who participated in the World Bank study.

But Israel also supports the idea, with billions of tourist dollars potentially lost by a continued decline in water levels. Garb has suggested unbundling the disparate pieces of the project. “Have the institutional structure and the economic structure reflect the fact that there are two things going on here: one is saving the Dead Sea, one is getting drinking water to Amman,” he says. 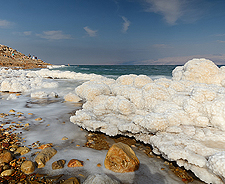 SeanPavonePhoto/Shutterstock
Along the Dead Sea coast, salt-encrusted rocks stick out in many places — they used to be under water.
Â
Garb also recommends that the parties first cooperate to list the Dead Sea as a UNESCO World Heritage Site, which will force those involved to more strictly define the goals of the Red-Dead project. “If they can’t get it together to cooperate to the extent of [writing] a letter, how are they going to cooperate on co-managing a billion-dollar megaproject?” Garb says.

Many conservationists argue that there are far more ecologically sensible — and cheaper —alternatives to the Red-Dead undertaking. Gidon Bromberg, a co-director of the non-profit environmental organization Friends of the Earth Middle East, has long advocated for the restoration of flows to the Jordan River. And progress is being made: Bromberg says that by the end of this year, all Israeli sewage around the lower Jordan will be treated and reused for agriculture, reducing withdrawals from the river. Also, the Israeli environment minister has committed to release 30 million cubic meters of fresh and saline water into the river as well. Such amounts, though, remain “completely insufficient,” Bromberg says, given the near drying-up of the Jordan River, which used to flow at a rate of about 1.3 billion cubic meters annually.

Bromberg agrees that the Red-Dead project has always been more about water for Amman, but recent studies have shown that the city could find 300 million cubic meters of water simply through better management of available resources. Amman will also need desalination plants, Bromberg says, which could be located either near the Gulf of Aqaba on the Red Sea or along the Mediterranean Sea. “The Red-Dead is not the answer — not ecologically and not economically,” he says. “[It] makes no sense.”

Will the Jordan River
Keep on Flowing?

Massive withdrawals for irrigation, rapid population growth, and a paralyzing regional conflict have drained nearly all the water from the Jordan River. In this e360 article, Israeli conservationist Gidon Bromberg described a multinational effort to save the fabled river.
READ MORE
The irony of the Red-Dead project is that the need for such a massive public works plan is the result of scattered public works projects in Israel, Syria, and Jordan over the last half century. The Jordan River’s flow was diverted to bring water to Tel Aviv and the Negev Desert and to cities in neighboring countries. Now the region is facing the consequences.