On the road from Nairobi into the Great Rift Valley not long ago, a 48-year-old Kenyan taxi driver named Jagata Sospeter pointed out how the landscape had changed in his memory — here a soccer field where rhinos were once commonplace, there a river where hippos used to live, and everywhere, as Kenya’s human population continues to boom, the endless sprawl of shambas, tin-roofed farmhouses surrounded by an acre or two of parched maize plants in place of open range. The one consolation, in a nation where tourism accounts for 10 percent of the gross domestic product, was that wildlife was at least secure within Kenya’s national parks and protected areas.

But a new study says that sense of reassurance is false, with wildlife disappearing just as fast inside Kenya’s national parks as out. According to an analysis by David Western and his co-authors, wildlife declined by 41 percent in national parks from 1977 to 1997, and the decline does not appear to have slowed since then. The study, published on PLoSOne, was 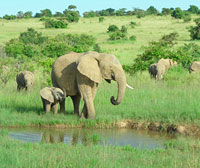 SXC Photo
ENLARGE IMAGE: With the rampant poaching of elephants and rhinos in the 1980s, the world had to face the idea that wildlife could survive in Africa only in parks.

commissioned by the Kenya Wildlife Service (KWS), which manages the country’s national parks. Shortly after the Western study appeared, a KWS spokesman announced that Kenya’s lion population, “the symbol of national strength,” is now declining so fast that lions could be extinct there within 20 years.

The Western study has attracted little media attention inside Kenya or beyond, in part because control of the national government remains a more pressing issue in the aftermath of a controversial 2007 presidential election. Reaction within the conservation community was also muted, in part because Kenya has long been notorious for mismanaging its wildlife — and also because Western himself is a long-time participant in the national bickering about how to fix the problem.

But the new study follows a raft of recent papers reporting similar declines in other protected areas across the continent. There are notable exceptions to this trend, particularly in the southern African nations of Namibia, Botswana, and South Africa. But together with continuing increases in human population, these studies raise the specter of an Africa without animals.

During the rampant poaching of elephants and rhinos in the 1980s, the outside world was shocked at the improbable idea that wildlife could survive in Africa only in parks patrolled by armed guards, and often behind fences. But if wildlife continues to decline as rapidly inside national parks as out, it could lead, biologists Tim Caro and Paul Scholte predicted in a 2007 article in the African Journal of Ecology, to “a continent containing isolated pockets of large mammal diversity living at low population sizes. Just like Europe.”

The wildlife declines point to the need for a radical review of conservation policies.

The new Kenya study compiled data from 270 wildlife counts over 30 years, mostly focused on antelopes, the feedstock on which lions, leopards, African wild dogs and other predators depend. Western, who was director of KWS in the 1990s, described it as “the first time we’ve taken a good look at a national park system in one country, relative to all of the wildlife populations across the whole country.” The paper notes that the wildlife declines “raise grave concerns about the adequacy of parks and point to the need for a radical review of conservation policies.”

But despite the trends revealed in his study, Western disputed the idea that Kenya could soon lose all its wildlife. Elephants and rhinos seemed to be going down to extinction in the 1980s, he said in a telephone interview with Yale Environment 360, but they didn’t “because people were alerted to this threat” and took action. He argued that the same kind of shift is happening now, especially as studies provide hard statistical evidence of the decline.

Western, a long-time advocate of involving local communities in wildlife management, argued that the answer is to continue expanding the focus “from national parks only to parks plus private lands and communal lands.” In the past, the benefits of tourism generally flowed to tour operators and KWS, he said, leaving nothing for local people, who naturally came to regard wildlife as a threat rather than a benefit. But wildlife populations are holding on, he said, in areas with “local participation.”

Co-author Samantha Russell cited the example of the Shompole conservation area and tourist lodge managed since 2000 by the Masai community on the Tanzania border near Lake Natron. “They’ve had wildlife increases and they’re very proud of that fact,” she said. Asked if the project has produced the sort of community benefits that Western sees as the key to changing attitudes toward wildlife, she said, “In theory, there’s a lot of money to be made.” But she conceded that “benefit sharing is always a tricky one to work out.”

Despite considerable optimism and international support over the years, community management schemes have frequently failed. A 2000 paper by Alexander Songorwa of the Tanzania Wildlife Division recited a lengthy 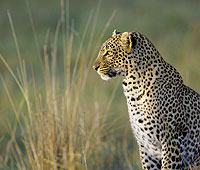 catalogue of impediments, including government reluctance to turn power back to locals, resistance from national park services, the inability of illiterate locals to handle new accounting systems, and lack of wildlife management expertise. But Western argued that much has changed in the years since Songorwa wrote his article, with Kenya training hundreds of local wildlife scouts and, more recently, resource assessors to keep track of changes in the habitat. “Once you give them a voice, you give them opportunity, you give them skills and training, that changes very rapidly. They’re not locked into backwardness, which really that view implies.”

James Deutsch, director of the Wildlife Conservation Society’s Africa program, praised the Western study for producing the first hard evidence of the “extremely depressing” changes in Kenya’s national parks. But he also questioned the study’s “black and white conclusions.” He noted that community management success stories rarely come from East Africa these days, but mainly from southern Africa, particularly Nambia, which has a stable national government and a low population density — unlike Kenya.

The pretence that all is well in Kenya’s protected areas has been blown out of the water.”

Deutsch accepted the study’s argument that the wildlife decline is due in part to bad design and siting of national parks, which often include only a fraction of the migratory range of major species. But that doesn’t explain, he said, why the largest parks in the study suffered the worst declines, while some small parks actually showed increases. He dismissed the study’s rosy assessment of the security provided by KWS, and blamed poaching across the border from Somalia for the 78 percent decline in Meru and the 63 percent decline in Tsavo East and Tsavo West National Parks.

Deutsch also noted that the study implicitly re-plays a dispute that has raged in Kenyan wildlife circles for 30 years, “often generating more heat than light.” On one side, Western pushes his community-involvement approach. On the other, Richard Leakey, another former KWS director, argues for “fences-and-fines.”

“For me, the world is complicated,” said Deutsch, adding that he’d be interested in a study “that doesn’t have an axe to grind from the start.” He rattled off a series of challenges to the survival of wildlife in Kenya — badly-flawed parks, little or no benefits flowing to people living around parks, a lack of income from legal trophy hunting and other consumptive uses of wildlife, the bushmeat trade, political corruption, inadequate protection against poachers — and suggested that in any given situation, either Western’s approach or Leakey’s might be the right way to go.

Soon after the new study appeared, a columnist in Swara, the East African Wildlife Society quarterly, took the entire Kenyan conservation establishment, including Western and Leakey both, sharply to task: “The cosy pretence that all is well within Kenya’s Protected Areas has been simply blown out of the water… Have the courage to admit that everything you have recommended, supported, funded and implemented over the last 30 years in Kenya to conserve wildlife has been a failure — or was it your intention to sit idly by while some 70 percent of wildlife vanished from under your very noses?”

Yet the prospects for reversing this grim trend seem small. The human population of sub-Saharan Africa continues to boom, with a projected increase of a billion more people across the continent by 2050. So both fences and community-friendly approaches will almost certainly need to work — along with some miraculous remedy still to be devised — if Africa’s rich and potentially lucrative wildlife legacy is to last through this century.