Africa’s savanna ecosystems — which include the thorn tree-studded plains of the Serengeti, the open woodlands of the Kruger National Park, and the dry, red sand savannas of the Kalahari — occupy about 70 percent of the continent south of the Sahara Desert. And evidence is mounting that these iconic and biodiverse landscapes are changing as rising levels of carbon dioxide in the atmosphere fuel the growth of trees at the expense of grasses, leading to an increasingly wooded landscape.

A 2012 survey of experimental plots in South African savannas — where fires, rainfall, and herbivore pressure have remained constant for decades — shows large increases in woody plant mass, which the authors primarily attribute to the so-called “CO2 fertilization effect,” the enhancement of plant growth caused by increasing atmospheric carbon dioxide. A modeling study published in the journal Nature last year describes a recent, rapid shift in extensive areas of African grassland and savanna to more densely vegetated, wooded states, a trend that is expected to accelerate in coming decades as atmospheric concentrations of CO2 rise. Already there are signs that open-country animals like the cheetah are suffering as savanna becomes more wooded. 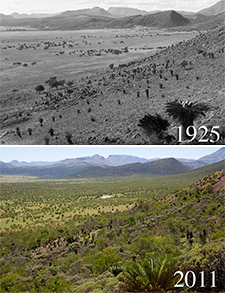 This trend is not confined to Africa. An Australian study released last month, which relied in part on satellite data, concludes that foliage cover in warm, arid areas worldwide has increased by about 11 percent in the last three decades due to higher CO2 levels. Randall Donohue and colleagues at the Australian national science agency, known as CSIRO, and the Australian National University said that the CO2 fertilization effect “is now a significant land surface process” shaping ecosystems across large parts of the planet.

Guy Midgley, a prominent South African climate researcher who has authored several papers on CO2 fertilization, said that the increase in arid-zone greening described in the Australian paper is “phenomenal.” The study, he said, was a valuable addition to a growing body of evidence that the rising concentration of atmospheric carbon dioxide is directly changing terrestrial ecosystems, independent of temperature increase.

Although some might view an increase in desert plant growth as positive, an expansion of woody vegetation in savannas and grasslands could have serious negative effects, Midgley cautioned. It could threaten and wildlife populations and water supplies, as trees and shrubs use more water than grasses. It could even amplify global warming, since trees, being generally darker than grasses, can absorb more solar radiation.

Savannas are the result of a battle for living space between grasses and trees that neither side has won.

Savannas can be seen as the result of a battle for living space between grasses and trees that neither side has won, said Midgley, chief director of the Climate Change and Bioadaptation Division of the South African National Biodiversity Institute. Should grasses win the battle, treeless prairies would result. If trees were to win, savanna would become increasingly dense woodland. Many African savannas are found in areas that have sufficient rainfall to support dense forest, but fire and large herbivores, such as elephants, constantly knock back trees, giving grasses space to grow and maintaining a rough equilibrium between the two sides. The “bush encroachment” observed across large swathes of southern Africa in recent decades is an example of the balance between grasses and trees being upset, he says.

In recent decades, across large tracts of southern Africa, ranchers and wildlife managers have been noticing an increase in woody vegetation. Shrubs and trees have invaded grasslands, transforming them into savannas. Savannas have become more densely wooded, sometimes impenetrably so. Anecdotal evidence and time series photographs indicate that this trend accelerated in the 1980s, and by the end of that decade “bush encroachment” was a commonly used term for what was happening in rangelands and wildlife areas across the subcontinent.

Namibia, a generally arid, thinly populated country to the northwest of South Africa, has been particularly hard hit; about 26 million hectares (64 million acres) of the country has been invaded by undesirable woody plants, which smother grazing areas. Because trees use more rain than grasses, they also significantly reduce groundwater recharge and runoff into rivers. The loss of grasslands is one reason the country’s beef production is now 50 to 70 percent below 1950s levels, according to some estimates. Bush encroachment costs Namibia’s small economy as much as $170 million per year. 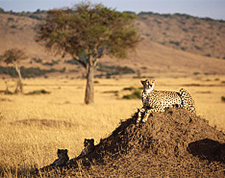 The loss of grasslands in sub-Saharan Africa is affecting wildlife, including the cheetah. GERALD HINDE

Changes in savannas are also affecting wildlife. Conservationists in Namibia, home to the world’s largest remaining population of cheetahs, began finding starving cheetahs with severe eye injuries about twenty years ago. Not only are their plains-antelope prey being crowded out by trees, but cheetahs — which prefer to hunt in open areas where they can exploit their famous speed — are also being blinded by the thorns of woody plants that are taking over the landscape.

Ornithologists studying the Cape vulture, a threatened southern African scavenger, have found that it avoids foraging for animal carcasses over bush-encroached areas. Cape vultures are large, heavy birds that need a long, clear takeoff run to launch themselves into the air. To avoid becoming meals for predators, it seems that vultures simply don’t land where the bush seems too dense for them to take off again. The species, once numerous in Namibia, no longer breeds there.

In the 1980s and ‘90s, the predominant view was that poor land management, especially overgrazing, was the main cause of bush encroachment because trees easily colonize the patches of bare earth created when too many sheep and cattle destroy perennial grasses. Some experts, however, noted that well-managed farms often suffered bush encroachment, too. Although overgrazing may contribute to bush encroachment, they felt that some greater environmental change was helping woody plants to dominate grasses.

In 2000, Midgley joined with William Bond, a University of Cape Town ecologist, to publish a paper proposing a mechanism whereby increased atmospheric CO2 could favor trees over grasses in their battle for territory in African savannas. In these savannas, grasses are more flammable and more fire-tolerant than trees — they carry fire through the landscape and regrow rapidly after fire, requiring less time (and less water, soil nutrients, and atmospheric carbon) to achieve maturity than trees.

To become established in the landscape, savanna trees have to reach a height of about four meters to avoid having their stems and crowns destroyed by grass-fueled fire. In other words, trees only become established if they’re given a break from fire long enough to build sufficiently tall stems to grow well above the flame zone. (Many African savanna trees are not killed outright by fire, but re-sprout from the roots after having their above-ground parts destroyed.)

By outcompeting grasses for water, nutrients, and light, trees begin to take over the landscape.

Past research showed that savanna trees usually take four or more years to reach fireproof height, but most African savannas burn every one to three years, so it’s only when there’s a been rare, longer-than-normal break between fires that trees can mature. More CO2 in the air means that trees can theoretically build their carbon-intensive stems and roots longer, thicker, and faster. Bond and Midgley hypothesized that because of this, trees could be growing and re-sprouting faster after fire than a few decades ago when the atmospheric CO2 level was lower, thus increasing their chances of reaching fireproof height. Then, by out-competing grasses for water, nutrients, and light, trees could dominate the landscape.

More recently, to test if savanna trees do in fact grow faster in increased atmospheric concentrations of CO2, Bond and Midgley’s colleague, Barney Kgope, grew African savanna tree and grass seedlings in chambers that allowed him to vary the CO2 levels in the air around the plants. The results, published in 2010, are striking. Some savanna trees grown in an atmosphere of 370 parts per million (ppm) of carbon dioxide (a little lower than today’s level of 400 ppm) grew more than twice as fast as the same species grown in the pre-industrial atmosphere of 280 ppm of CO2. Not only were the trees grown at 370 ppm taller than those grown in pre-industrial concentrations of CO2, they had bigger thorns to protect them from herbivores and far more extensive root systems than their pre-industrial counterparts. They had, in Bond’s terms, become “supertrees.”

Researcher Donohue said that although the satellite images used in his new Australian study did not distinguish between green grasses and green woody plants, the trends he and his colleagues observed were consistent with a general increase in plant biomass across Africa due to CO2 fertilization. Although some news outlets have reported his study’s results as demonstrating an “upside” to climate change because deserts are “greening,” Donohue cautioned against this one-sided interpretation. “There will be winners and losers,” he said, because increased vegetation in some arid areas may well increase local biodiversity, but may also harm species adapted to less-vegetated habitats.

Guy Midgley has a more pessimistic view of atmospheric CO2’s apparently increasing influence. “We [South Africans] like our non-forest ecosystems,” he said, noting that aside from the impacts that an increase in woody plants will have on grassland wildlife and livestock ranching, the country’s grasslands form watersheds that feed rivers vital to the economy. Studies show that water yields of South African grassland catchment areas drop significantly when invaded by alien trees, one reason that the government spends millions of dollars a year to remove them.

‘We’re in a brave new world from a plant’s perspective — it’s a little frightening,’ says one scientist.

South African ecologists are trying to figure out how best to stop trees from taking over savannas, perhaps with “fire storms” — controlled fires set on hot, dry days to maximize the heat they generate — or careful tree-thinning. But super-hot fires might have their own negative effects on ecosystems, and manual thinning could be too expensive.

Midgley said that by reaching today’s level of 400 ppm of atmospheric carbon dioxide, “we’ve turned the evolutionary clock back 5 million years in under a century. It’s a massive change in how our ecosystems work.” He noted that atmospheric CO2 could hit 600 ppm by 2100, a level last seen during the Eocene epoch of 34 to 55 million years ago, when forests covered nearly all of the planet and long before modern grasses and the large savanna mammals that we know today evolved.

“We’re in a brave new world from a plant’s perspective,” said William Bond. “It’s a little frightening. Our plains animals have their backs against the wall.” The new invading trees won’t do anything meaningful to combat climate change, he said, because they’re a negligibly small carbon sink in global terms.

“Wangari Maathai was wrong,” he chuckled playfully, referring to the Kenyan environmentalist and Nobel Peace Prize winner who advocated a tree-planting campaign across the continent. “Trees aren’t always a good thing.”