As the Bush administration starts to pass from the scene and the contenders to succeed him speak with reasonable seriousness about carbon, the question for environmentalists is going to change from: “Are we doing anything about global warming?” to “Are we doing anything near enough about global warming?” Both of those are political questions — but the second one is also a scientific query, for the answer to it depends on knowing how much we need to do.

The shorthand answer to that (and the one number you need to know to understand the 21st century) is: 350, as in 350 parts per million of carbon dioxide in the atmosphere.

The longer answer goes like this. Twenty years ago, when we started worrying about what we then called the greenhouse effect, we had only the crudest notion of how much carbon dioxide in the atmosphere was too much. The biggest debates were about whether global warming was real, and whether or not it had already begun. It didn’t take too long — half a decade — for the Intergovernmental Panel on Climate Change to say yes to both. But the subtler questions — How immediate a problem is this? Where do the thresholds lie? — were much harder.

Early on, scientists contented themselves with calculating what would happen if carbon dioxide levels in the atmosphere doubled from their pre-industrial levels of 275 parts per million. It was a large enough increment to model with the computers then at hand. And so we all talked about what bad things would happen at 550 parts per million until it became, by default, the kind of psychological red line — a red line that soon showed up on various government charts. I can remember writing an outraged op-ed piece for The New York Times in the mid-1990s when some Clinton administration plan foresaw overshooting 550 — it had for no especially good reason become the target.

But in the last few years it became apparent that the earth was more finely balanced than we’d imagined. So far we’ve increased the planet’s temperature barely a degree Fahrenheit, which 20 years ago we would have said would have just gotten us to the threshold of noticeable global warming — everyone then guessed that the big effects would still be a few decades down the road. But what do you know? One degree was enough to yield major effects in hydrological cycles, in the progress of the seasons, in the spread of mosquitoes, in the rapid melt of glaciers. Which is why, over the last few years, some of the big environmental groups and some European governments began talking about a new, lower target of atmospheric CO2: 450 parts per million, which scientists guessed roughly equated to a global temperature increase of two degrees Celsius, or 3.6 degrees Fahrenheit.

But again, the data for this threshold was scant — it was also psychological, a way of saying, “We need to do more, and quicker.” And it remained, just, within the realm of the possible: at the moment, the planet’s atmosphere contains 385 parts per million CO2, and if you run the numbers just right you can imagine stepping on the brakes hard enough that you just graze 450. 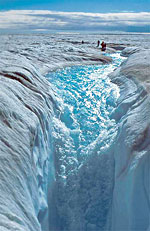 Meltwater pours into one of hundreds of deep holes recently observed in the Greenland ice sheet. ROGER BRAITHWAITE

But here’s the problem. Last fall, the Arctic melted. Not a little, like it’s been melting since the 1970s. But a measured-in-areas-the-size-of-Texas lot, way more than we’d ever seen before. It scared scientists, who were increasingly wary anyway, because the more they come to understand about the paleoclimatic record, the more it seems that small changes in radiative forcings have been enough to trigger awful changes in the past.

If we are at 385 parts per million, and everything is melting, what does that tell you? What it tells you is: This is not a future problem. We’re already past the line, out of the safe zone. We need to be scrambling like offside linemen to get back where we belong before the whistle blows. And the line we need to return to, if we hope to avoid wrenching disruptions from global warming, is 350 parts per million.

It took, as it has so often in the greenhouse story, the leadership of NASA’s James Hansen to really set the stakes in perspective. Speaking last December to the American Geophysical Union, Hansen, head of the Goddard Institute for Space Studies, outlined several areas where we ran the risk of crossing horrible tipping points, a risk that increased each year we stayed above 350. They included the melt of Arctic sea ice, the melt of the great ice sheets over Greenland and the west Antarctic, the shift in climate zones wrecking prime agricultural areas, the drying-up of crucial water supplies as alpine glaciers melt in the tropics, and the acidification of the oceans as CO2 accumulates there.

Perhaps the most important, in the short run (though it’s like picking which terminal illness you’d most want to contract) is the prospect of rapid melt on the ice sheets of Greenland and the West Antarctic. We used to think these ice sheets were stable on a time-scale of centuries, because how do you even start to melt a mile and a half of ice? I mean, it’s inertia defined. But it turns out that nature may have a method. As temperatures warm, snow at the very top of that ice sheet is turning to water, and that water in turn is finding its way through cracks and fissures to the base of the ice sheets where it can grease the skids for their slide into the ocean.

Meanwhile, rising and warming seas can eat away at the glaciers along the sea’s edge, which serve as corks in the bottle for the inland ice sheets. Add it all up badly enough, and there’s at least the possibility — or so Hansen testified recently in federal court under oath — for five meters of sea level rise this century. Which is another way of saying the end of civilization as we know it, since there’s not enough money on earth to defend our coastal cities or the fertile plains near the sea — the places where the world mostly, you know, lives — from that kind of rise.

So that’s the science. And from it must now flow the politics. Forget the plans we’ve laid so far, which see us slowly easing up on the use of coal, and ratcheting up the use of renewables, mostly by gradual shifts in the price of carbon. That might get us to 550, and it might possibly even get us somewhere near 450. But 350 — well, that means in essence that we have to leave most of the carbon underground that’s now there.

The price of oil is so high — and the dependence so deep — that it’s likely going to mostly get pumped; the real question, according to Hansen’s calculations, is whether we’re also going to burn our planet’s coal, and whether we’re going to develop the exotic sources of petroleum, like tar sands and oil shale. If we do, then we’ll never get back to 350. If we don’t — if we stop building new coal-fired plants now and begin closing the ones we have — then the planet may retain enough carbon-cycling ability to pull us back below the line. It’s like having high cholesterol — if you radically change your diet, it will fall. But you’ve got to do it before you, um, die.

There’s only one possible way to make change on that scale: an all-out World War II style effort to convert our economy away from carbon and towards — well, towards conservation, towards buses and bikes, towards wind and sun. We might even have to consider currently far-fetched schemes to pull CO2 out of the atmosphere (at the very least, we’d need to spend big to see if they’re a real possibility). We’d need to do it with a truly aggressive price on carbon (which, to keep from impoverishing everyone, you’d need to rebate back to individuals through some scheme like the increasingly crucial Sky Trust proposed by Peter Barnes). We couldn’t have a nice, seamless transition; we’d need a Saul-on-the-Damascus-road conversion, where the scales fell from our eyes and we set to work.

And that would be the easy part. We’d then need to figure out how to finance the same transition in the developing world. The Chinese still have a low standard of living, most of them. They’re not going to forego heat and light; they’re going to need something like a global Marshall Plan-equivalent to help them develop without burning their coal. Massive transfer of technology would be required — which means, in truth, pretty massive transfer of resources. Which just maybe is not what the American voter is ready for right now.

Is any of this realistic? That’s the right question, because it forces us to think about the meaning of reality.

So far, the method has been to ask what’s going to work economically and politically and then work from there — that is to say, the “reality” of what you can persuade senators, or Fortune 500 companies, or taxpayers to support has set the tempo. And that is one important definition of reality — in a democracy, in fact, it’s usually the most crucial one.

But in this case physics and chemistry increasingly impose a reality of their own. We find ourselves out of the safety zone in which human civilization has developed and flourished, a safety zone limited by the automatic reaction of the planet’s climate system to an increase in the amount of solar radiation trapped in our atmosphere. That is, almost literally, a higher reality. If we’ve got a chance, the science now has to drive the politics — not the other way round.

In a very real sense, it’s a contest between human nature and nature nature to see which will blink first. Physics and chemistry don’t bluff and they don’t bargain — they just are. If there’s a way out of this box, therefore, it’s up to us.