The latest report from the Intergovernmental Panel on Climate Change (IPCC) for the first time sets a cap on the amount of carbon emissions we can allow into the atmosphere before calling a complete and permanent halt — if, that is, we are serious about keeping global warming below two degrees Celsius. That cap was set last month at a trillion tons of carbon. We are something over half way there, with time fast running out. 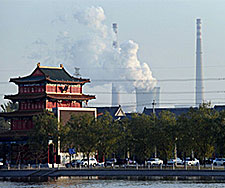 Emissions from a coal-fired power plant on the outskirts of Beijing are a reminder of China’s growing carbon footprint. FREDERIC J. BROWN/AFP/GETTY IMAGES

But where did this figure come from; why has a measure of cumulative emissions suddenly emerged as the new touchstone for dealing with climate change; why did it cause such a fuss before governments signed off on it last month; and, most important of all, how do we go about achieving it?

Most governments agreed at the Copenhagen climate negotiations in 2009 that the world should act to prevent global warming going more than two degrees Celsius above pre-industrial levels. Anything higher would be dangerous for many parts of the world, they concluded. Until now there has been uncertainty about what exactly achieving that entailed. So the IPCC statement on a cap is an attempt to end that confusion.

“What’s new here is that we show the carbon we emit will largely stay in the atmosphere for centuries. So every ton we emit creates a long-term impact,” says Reto Knutti of the Institute of Atmospheric and Climate Science in Zurich, Switzerland, who was the lead author of the relevant section of the IPCC report on the science of climate change. “The climate change it causes will be essentially irreversible,”he adds, without geo-engineering (large-scale deliberate manipulation of the earth’s climate.

The trillion-ton target rubbed home the fact that most of the atmospheric safe space for carbon has been used up.

This cumulative carbon measure has the added benefit that it strips away a lot of the uncertainties surrounding complicated scenarios for cutting emissions, says IPCC climate modeler Myles Allen of Oxford University. “Policy targets based on limiting cumulative emissions of carbon are likely to be more scientifically robust than [those from] emissions rates or concentration targets,” he says.

But that fixed budget, while creating some much-needed scientific clarity, also creates opposition. As I reported at Yale Environment 360 after the report’s launch, the trillion-ton target was the last bit of the summary for policymakers to be signed off on by governments when the IPCC met in Stockholm last month. A final five-hour overnight session was entirely devoted to wrangling on the issue.

It mattered because it rubbed home the fact that most of the atmospheric safe space for carbon has already been used up — and used overwhelmingly by rich industrialized nations, leaving little for late-comers with often larger populations.

Thus, according to the World Resources Institute, a Washington-based think tank, the U.S. has since 1850 grabbed three times more carbon space in the atmosphere than China, despite today having only a quarter of China’s population. And the U.K., the first industrialized country, has occupied 6 per cent of the taken space, despite having less than 1 percent of the world’s population.

To some government delegations in Stockholm — China and Brazil were most vocal — it looked like the rich nations were using science to legitimize a back-door cap on their future emissions. Knutti, who spent the five hours successfully arguing against attempts to water down his text, denies this. “The trillion tons is a carbon budget. How it is allocated we didn’t consider, because that is political. But of course some policymakers don’t like it.”

With current trends, it is estimated that the trillionth ton of carbon will be emitted in November of 2040.

Leaving aside the politics for a moment, what does this mean for global emissions? A web site set up by climate researchers at Oxford University, England, is counting the tons in real time: www.trillionthtonne.org. The world has now emitted over 574 billion tons, it says. “Based on emission trends over the past 20 years, we expect the trillionth ton will be emitted on Sunday, 25 November, 2040.” This presumes that the oceans and terrestrial ecosystems will continue to absorb roughly half of our emissions — a big assumption, many climate scientists believe. But it is the best guess we have.

According to the web site, to prevent the trillionth ton ever being emitted, our emissions have to fall by 2.47 percent a year, and to keep on falling at that rate until they reach zero.

Anyone wanting to make their own calculations of the different options for future carbon budgets that keep us safely below two degrees of warming can use an interactive model developed by the UK-based independent campaigning organization, the Global Commons Institute (GCI).

If holding global warming below two degrees requires a trillion-ton cap, then the next question is how we might share out the remaining atmospheric space. And here things get really hard. Logically, there should be some sense of fair shares. Most people believe that should be based on population.

The GCI’s founder and the man behind the carbon budget calculator, Aubrey Meyer, is also the inventor of the idea of “contraction and convergence,” as the only equitable way of saving the world from dangerous climate change. Contraction is the bit where we agree on a carbon budget beyond which the world cannot go. Convergence involves sharing out the remaining rights, which he says should be based on national population sizes.

Meyer says we should ignore the past and start sharing the remaining space from today. An American geophysicist, Raymond Pierrehumbert of the University of Chicago, assumed a start date of 2000 and found that a fair shares approach would require North America to cease emissions completely by 2025.

The cumulative emissions of developed nations have been calculated at more than seven times those of developing nations.

But many developing nations, as was evident in Stockholm, do not think the past can be ignored. They include China, where the nation’s scientists have been looking at alternative baselines. Geophysicist Ding Zhongli, vice-president of the Chinese Academy of Science, says any sharing formula must first recognize how much space has been used up already. He worked out the accumulated past emissions of nations since 1900, and concluded that, per head of current populations, the historical cumulative emissions of developed nations are more than seven times those of developing nations.

If we want to limit cumulative carbon emissions to a trillion tons, as proposed by the IPCC, then he says industrialized nations have long since exhausted their pollution entitlements. The U.S. went over its limit in 1936, followed by the U.K. in 1945 and Germany in 1963. Japan probably reached its limit in 2013, but on current trends, China won’t till 2047 and India only after 2050. In those circumstances, he says, “how to allocate the remaining emissions space would be an extremely tough issue in terms of international negotiation. I personally think this is an almost impossible task.” The only solution, he believes, would be for the rich world to pay cash compensation to those nations unable to take up their proper entitlement.

Others have done similar calculations and reached broadly similar conclusions. Thiagarajan Jayaraman of India’s Tata Institute of Social Science says the fact that the rich world has long since overshot its targets means it will be “impossible for most developing countries to obtain their entire entitlement to the atmospheric commons.” He thinks the only solution will be to bust the carbon budget. “A higher budget needs to be used to provide more for countries that will be unable [otherwise] to get their fair share,” he says.

In the end, political agreements will mean nothing unless there are practical means of achieving them. So what needs to be done? Some used to think we might run out of oil and other fossil fuels in time to stave off climate disaster. That no longer seems likely. Discoveries of unconventional reserves like shale gas and tar sands — and advances in technology for extracting them — have transformed predictions of how much fossil fuel we can tap.

There is at least another trillion tons of carbon lying in economically viable reserves of fossil fuels, and we have room for less than half that, says Allen. We have to prevent it from getting into the atmosphere. That, of course, means getting our energy in new ways. The favorite option for most is renewables like wind and solar power, hooked up to giant grids that even out the inevitable large fluctuations in supply.

It is theoretically doable, and prices for such energy are falling fast. The problem right now is scaling up the renewables industry to the scale required. Fears about our ability to achieve that lead some to back the one large-scale source of 24/7 low-carbon energy that we have right now: nuclear power. That argument has had a bumpy ride from environmentalists. But as the U.K. this month harnesses French expertise and Chinese finance to relaunch its nuclear power program, it is destined for a revival.

The worst thing may be that there is no guarantee that keeping below the trillion-ton target will be enough.

Another option is to stick with some share of fossil fuels but to ensure that the carbon emissions are captured from the stack and put out of harm’s way — down old oil wells, coal mines or other geological spaces such as salt mines.

Allen argues that since we don’t seem to have the global self-control to keep the carbon in the ground, carbon capture and storage (CCS) is the only realistic option. “The only question that really matters is what fraction of remaining [carbon] reserves will be captured and stored.” If we are to meet the 2-degree goal and limit carbon emissions to below a trillion tons, he says, “that fraction needs to be at 50 percent by mid-century and heading for 100 percent by 2100.” He says fossil fuel extractors should be required by law to put an ever-increasing fraction of the carbon content of that fuel back underground after its use.

But others see the development of CCS as a smokescreen for the fossil fuel industry to stay in business — whereas what we need is to banish it. They fear above all what Hans Joachim Schellnhuber, director of Germany’s Potsdam Institute for Climate Impact Research, describes as the “lock-in dominance” of the “largest business on Earth.” The fossil fuel industry, he says, has spent trillions of dollars on infrastructure to maintain a stranglehold on our energy supplies, and persuaded us that there is no alternative. The lock must be broken.

We have options, but the stakes are high. And the worst thing may be that there is no guarantee that keeping below the trillion-ton target will be enough. The IPCC admits it does not allow for other emissions of greenhouse gases, and particularly for the danger that the planet’s ecosystems might react to climate change in dangerous ways — for instance by bubbling methane out of melting Arctic permafrost.

That might be the moment the world will need the “doomsday” adoption of geo-engineering measures to remove carbon from the air or shade the planet from solar radiation. The growing band of supporters of geo-engineering say we have to have such techniques in our locker, ready for such an emergency. “If all else fails, then we should keep it as a last resort,” says John Shepherd of the British government’s National Oceanography Centre, author of a study on geo-engineering for the Royal Society in Britain. But even its advocates insist that geo-engineering should never be a substitute for killing our carbon emissions.