Demographers aren’t known for their sense of humor, but the ones who work for the United Nations recently announced that the world’s human population will hit 7 billion on Halloween this year. Since censuses and other surveys can scarcely justify such a precise calculation, it’s tempting to imagine that the UN Population Division, the data shop that pinpointed the Day of 7 Billion, is hinting that we should all be afraid, be very afraid.

We have reason to be. The 21st century is not yet a dozen years old, and there are already 1 billion more people than in October 1999 — with the outlook for future energy and food supplies looking bleaker than it has for decades. It took humanity until the early 19th century to gain its first billion people; then another 1.5 billion followed over the next century and a half. In just the last 60 years the world’s population has gained yet another 4.5 billion. Never before have so many animals of one species anything like our size inhabited the planet.

And this species interacts with its surroundings far more intensely than any other ever has. Planet Earth has become Planet Humanity, as we co-opt its carbon, water, and nitrogen cycles so completely that no other force can compare. For the first time in life’s 3-billion-plus-year history, one form of life — ours — condemns to extinction significant proportions of the plants and animals that are our only known companions in the universe. 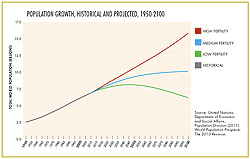 Did someone just remark that these impacts don’t stem from our population, but from our consumption? Probably, as this assertion emerges often from journals, books, and the blogosphere. It’s as though a geometry text were to propound the axiom that it is not length that determines the area of a rectangle, but width. Would we worry about our individual consumption of energy and natural resources if humanity still had the stable population of roughly 300 million people — less than today’s U.S. number — that the species maintained throughout the first millennium of the current era?

It is precisely because our population is so large and growing so fast that we must care, ever more with each generation, how much we as individuals are out of sync with environmental sustainability. Our diets, our modes of moving, and our urge to keep interior temperatures close to 70 degrees Fahrenheit no matter what is happening outside — none of these make us awful people. It’s just that collectively, these behaviors are moving basic planetary systems into danger zones.

Yet another argument often advanced to wave off population is the assertion that all of us could fit into Los Angeles with room to wiggle our shoulders. The image may comfort some. But space, of course, has never been the issue. The impacts of our needs, greeds, and wants are. We should bemoan — and aggressively address — the gross inequity that characterizes individual consumption around the world. But we should also acknowledge that over the decades-long span of most human lifetimes, most of us are likely to consume a fair amount, regardless of where and how we live; no human being, no matter how poor, can escape interacting with the environment, which is one reason population matters so much. And given the global economic system and the development optimistically anticipated in all regions of the world, we each have a tendency to consume more as that lifetime proceeds. A parent of seven poor children may be the grandparent of 10 to 15 much more affluent ones climbing up the ladder of middle-class consumption.

We can put in place conditions that will support an early end to population growth.

This, in fact, is the story of China, often seen not as an example of population’s impact on the environment but that of rapid industrialization alone. Yet this one country, having grown demographically for millennia, is home to 1.34 billion people. One reason the growth even of low-consuming populations is hazardous is that bursts of per-capita consumption have typically followed decades of rapid demographic growth that occurred while per-capita consumption rates were low. Examples include the United States in the 19th and 20th centuries, China at the turn of the 21st, and India possibly in the coming decade. More immediately worrisome from an environmental perspective, of course, is that the United States and the industrialized world as a whole still have growing populations, despite recent slowdowns in the growth rate, while already living high up on the per-capita consumption ladder.

Many of the impacts of this ubiquitous multiplication of per-capita resource consumption by the number of individuals are by now well documented. Humanity started to overwhelm the atmosphere with greenhouse gases not long after the Industrial Revolution began, a process that accelerated along with population and consumption growth in the 20th century. Fresh water is now shared so thinly that the United Nations Environment Program (UNEP) projects that in just 14 years two thirds of the world’s population will be living in countries facing water scarcity or stress. Half of the world’s original forests have been cleared for human land use, and UNEP warns that the world’s fisheries will be effectively depleted by mid-century. The world’s area of cultivated land has expanded by about 13 percent since its measurement began in 1961, but the doubling of world population since then means that each of us can count on just half as much land as in 1961 to produce the food we eat.

We can’t stop the growth of our numbers in any acceptable way immediately.

For the rest of life on Earth, the implications of all this are obvious. Where we go, nature retreats. We are entering an epoch scientists have begun calling the Anthropocene, a break with the geologic past marked by humanity’s long-term alteration of the natural world and its biota. We are inadvertently bringing on the sixth mass extinction not just because our appetites are vast and our technologies powerful, but because we occupy or manipulate most of the land in every continent except Antarctica. We appropriate anywhere from 24 percent to nearly 40 percent of the photosynthetic output of the planet for our food and other purposes, and more than half of its accessible renewable freshwater runoff.

Given these facts, it’s hardly surprising that wildlife conservation faces an uphill battle globally and in every nation, while ambitious concepts like the creation of wildlife corridors to help species escape the ravages of development and climate change proliferate despite their impracticality in a world of growing human impacts.

So should we be afraid on the day we gain a 7 billionth living human being, especially considering UN demographers are now projecting anywhere between 6.2 billion and 15.8 billion people at the end of the century? Fear is not a particularly productive response — courage and a determination to act in the face of risk are the answer. And in this case, there is so much to be done to heal and make sustainable a world of 7 billion breathing human beings that cowering would be not just fatalistic but stupid.

Action means doing a lot of different things right now. We can’t stop the growth of our numbers in any acceptable way immediately. But we can put in place conditions that will support an early end to growth, possibly making this year’s the last billion-population day we ever mark. We can elevate the autonomy of women to make life-changing decisions for themselves. We can lower birth rates by assuring that women become pregnant only when they themselves decide to bear a child.

By the sheer scale of our presence and activity we are putting ourselves and all life at risk.

Simultaneously, we need a swift transformation of energy, water, and materials consumption through conservation, efficiency, and green technologies. We shouldn’t think of these as a sequence of efforts — dealing with consumption first, because population dynamics take time to turn around — but as simultaneous work on multiple fronts. It would be naïve to believe we will arrive at sustainability by wrestling shifting technologies and lifestyles while human population grows indefinitely and most people strive to live as comfortably as Americans do. Nor should we take comfort in the illusion that population growth is already on a path to end soon. Demographers can no more tell us when that will happen (or through what combination of lower birth rates or higher death rates) than economists can predict when robust global economic growth will resume. Both expert groups are mocked by the many surprises the future holds in store.

Rather than forecast the future, we should work to secure it. More than two in five pregnancies worldwide are unintended by the women who experience them, and half or more of these pregnancies result in births that spur continued population growth. Clearly there is vast potential to slow that growth through something women want and need: the capacity to decide for themselves when to become pregnant. If all women had this capacity, survey data affirm, average global childbearing would immediately fall below the “replacement fertility” value of slightly more than two children per woman. Population would immediately move onto a path leading to a peak followed by a gradual decline, possibly well before 2050.

Despite the obvious barriers to women’s rights in today’s world, such a vision rests on a set of straightforward and achievable conditions: Women must be able to make their own decisions free from fear of coercion or pressure from partners, family, and society. They must not depend on prolific motherhood for social approval and self-esteem. And they must have easy access to a range of safe, effective, and affordable contraceptive methods and the information and counseling needed to use them.

For those who care about the environment, the future of human civilization, or both, the Day of 7 Billion should prod us to face and address the risks of continued population growth. By the sheer scale of our presence and activity we are putting ourselves and all life at risk. No human being has the right to consume forever more than any other. Yet if we could somehow close the global consumption gap, the importance of our numbers would be even more obvious as the limits of natural systems were crossed. It scarcely lessens the importance of reducing both consumption and inequity to celebrate the fact that population growth can end without policies that restrict births, without coercion of any kind, without judgments on those who choose large families. We are not far from a world in which the number of births roughly balances the number of deaths, based on pregnancies universally welcomed by women and their partners.

The transition to this world may not be entirely painless. Nations will have to adjust to rising average ages as birth rates descend further. In China and India, smaller families may contribute to artificially high ratios of baby boys, with possible risks to future social stability. But these problems are the kind that societies and institutions are generally good at handling. Stopping climate change, reducing water scarcity, or keeping ecosystems intact, by contrast, don’t yet seem to be in our skill set. Working now to bring population growth to an end through intentional childbearing won’t solve such problems by itself, but it will help — a lot. And such an effort, based on human rights and the dignity and freedom of the world’s childbearers, is in the interest of all who care about a truly sustainable environment and human future.