In Northeast Philadelphia, along busy Kensington Avenue, sits a small park. What used to be flat ground is now sloping terrain that contains a low-lying area intended to gather and funnel storm water. At the park’s southern end is a depression lined with well-arranged plants — a new landscape carefully engineered to change how water flows through the area.

This is Womrath Park, one of a handful of “green infrastructure” projects Philadelphia has begun — with many more to come — aimed at tackling a widespread urban environment problem. Ten trillion gallons of rainwater per year flow over rooftops and roads around the U.S., picking up contaminants that include bacteria, oil and grease, metals, pesticides, and many others. When a rainstorm is big enough, the runoff causes overflows from outdated sewer systems that combine both raw sewage and stormwater in a single pipe. This tide of pollutants ends up in surrounding waterways that serve as drinking water sources and recreational areas. 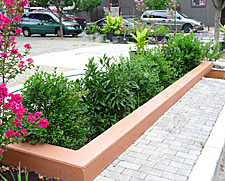 Now, however, numerous cities around the country — including Philadelphia, New York, Washington, Portland, and Seattle — have embarked on innovative stormwater runoff fixes that rely not so much on the old “gray infrastructure” of huge, piped systems and sewage treatment plants, but rather on new green infrastructure techniques to collect and treat stormwater at the street level.

Green infrastructure mimics how nature handles rainwater through the use of porous surfaces, rather than impervious surfaces like roadways. These techniques are decentralized. Instead of one facility or large underground tank to store water when a big storm hits, the idea is to eliminate the need for such storage through the use of green rooftops, roadside plantings, carefully landscaped parks, rain gardens, rain barrels, and other swatches of nature dropped down inside the landscape of modern cities.

The plants and soils collect water during a storm, preventing it from either running into sewer systems at all, or at least slowing it down to prevent overflows. Green infrastructure can also help clean some pollution from the water and can even be used to gather water for re-use.

“The green infrastructure approach says, ‘Let’s get the water out of those sewer systems in the first place before it has a chance to convey all that pollution into our waterways,’” says Levine. “And the way to do that is to put back into our built environment features that mimic the way nature handles rainwater in the natural water cycle. It doesn’t necessarily mean replacing a paved street with a park, but it means putting enough green space into the design of your roadway that you can capture runoff from that paved space.”

Green stormwater infrastructure means thousands of individual projects in big cities like New York or Philadelphia. The price tag — Philadelphia is spending around $3 billion, and the country as a whole needs something like $63 billion just in fixes to stormwater-related sewage overflows — is high. But advocates say going green is eventually a far more cost-effective method than constructing large wastewater treatment plants. Philadelphia and other cities are using city and federal funding to finance these green infrastructure projects.

Valessa Souter-Kline, a representative of the Philadelphia Water Department, says the decentralized concept of green infrastructure development represents a major challenge. “No one is saying ‘no’ to the idea,” says Souter-Kline, standing at the bottom of the rain garden in Womrath Park. “The issue is the scale. You just need so much of this.” On any given project, she says, the Philadelphia Water Department will likely have to work with the streets department, parks and recreation, utility companies, and other stakeholders.

Levine and others say the new methods of stormwater runoff control deal with a key flaw in the landmark 1972 Clean Water Act — “nonpoint source” pollution.

“It is a very different way of approaching water infrastructure than we have typically had in this country,” Levine says. “We’re talking about thousands of rain gardens and green roofs, and pavement installations, and street trees, and that’s a different sort of a public works project to manage, administer, and maintain. That brings all sorts of challenges along with it that cities are really rapidly having to adapt to and learn the best ways to deal with.”

‘To a greater or lesser degree, cities everywhere are starting to look at this,’ says one expert.

Despite the difficulties, these projects are gaining momentum. “To a greater or lesser degree, cities everywhere are starting to look at this,” says Ed McMahon, a senior resident fellow at the Urban Land Institute in Washington D.C., and the co-author of a 2006 book on green infrastructure. “One of the things that they’ve started to recognize is that using natural systems oftentimes can be less costly than the structural approach to stormwater management.”

While eastern cities have recently launched large projects to address stormwater, some cities on the West Coast have been making incremental progress for far longer. Seattle and Portland have strong programs, including incentives in Seattle to install rain barrels on private property within watersheds served by combined sewer systems. Portland is planning to build 2,200 green infrastructure installations around the city and has a runoff retention standard that applies to building projects with even small amounts of impervious surfaces.

But on the East Coast, Philadelphia is the clear frontrunner. In June 2011, the city approved the Green City, Clean Waters program, a 25-year, $3 billion plan to reduce combined sewer overflows. In April 2012, the Environmental Protection Agency (EPA) signed off on the project, and EPA administrator Lisa Jackson said she hoped the city would serve as a model for the rest of the country. Philadelphia was the only city to meet all the requirements for “Emerald” status in the NRDC’s latest “Rooftop to Rivers” report on stormwater management.

In Womrath Park, completed in 2012, stormwater flows through a swale and into a depression at the end, a rain garden. Some water infiltrates directly into the soil and groundwater, while the rest is held up and released slowly into the sewers to avoid overflows into Frankford Creek, only a few blocks away. Citywide, the idea is to be able to capture an inch of rainfall during storms and reduce combined sewage overflows by 7.9 billion gallons per year, or about 85 percent.

Elsewhere, the EPA signed an agreement with Washington, D.C., in December 2012 that closely resembles the Philadelphia program. Washington will start with a series of green infrastructure projects in the Potomac and Rock Creek watersheds. On a federal scale, the EPA is partnering with many other municipalities and watersheds to provide funding and assistance with stormwater infrastructure improvements.

New York City represents perhaps the biggest challenge. Levine says New York has 30 billion gallons of combined sewage overflow every year, and impervious surfaces cover 72 percent of the city. The city has committed to providing green infrastructure for 10 percent of the impervious surface area over the next 20 years, capable of capturing one inch of rain during storms. Roughly $730 million in public funding will be spent on green infrastructure over the next 10 years. “So any one-inch rainstorm or less, there is going to be a place for that water to go without making it into the sewer system,” Levine says.

Other ideas are in the works as well. Ate Atema, an architect, is working on an initiative called Street Creeks intended to reduce pollution flowing from the notorious Gowanus Canal area in Brooklyn. Built in 1869, the Gowanus was lined by chemical plants and other industrial sites that spent a century dumping toxic waste products into the water. As a result, it is among the most polluted urban waterways in the country, and was named a Superfund site in 2010. The canal also receives stormwater runoff from the hilly neighborhoods of Park Slope and Cobble Hill on either side.

Atema’s Street Creeks is a simple, modular way of capturing the “first flush” of stormwater that flows down the hill from Prospect Park toward the Gowanus.

“The first 0.15 inches of rain more or less takes 80 percent of the mass contaminant load off the streets,” Atema says. His plan would handle this “first flush” by constructing roadside creeks, about 18 inches deep and two feet wide, that would funnel stormwater toward a bioswale, where soils and plants could slow and clean the runoff.

To minimize costs, Atema says the plan would aim to install the “street creeks” on blocks undergoing other types of maintenance. In the Gowanus area, the project could eventually cover 250 blocks that flow toward the Canal. The cost of the project has not yet been calculated. Atema says the idea is still in the design phase, but talks with the city have begun.

These projects demonstrate a realization that nature is often very good at things we humans find hard to accomplish through classic, straight-line engineering.

“When people start really thinking about how a natural approach to the management of water, the cleaning of air, and so forth, can actually reduce costs and increase value at the same time,” says McMahon of the Urban Land Institute, “I just think that it’s inevitable that we’re going to see this as a much more preferred approach going forward.”