Batten down the hatches; fill the grain stores; raise the flood defenses. We cannot know exactly what is coming, but it will probably be nasty, the latest report from the UN’s Intergovernmental Panel on Climate Change (IPCC) will warn next week. Global warming will cause wars, displace millions of people, and do trillion-dollar damage to the global economy. 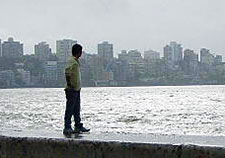 But careful readers will note a new tone to its discussion of these issues that is markedly different from past efforts. It is more humble about what scientists can predict in advance, and far more interested in how societies can make themselves resilient. It also places climate risks much more firmly than before among a host of other problems faced by society, especially by the poor. That tone will annoy some for taking the edge off past warnings, but gratify others for providing a healthy dose of realism.

The study, the result of a five-year review of published papers, is from the IPCC’s scientists working on the impacts of climate change. It complements an IPCC study late last year on the planetary science and will be followed next month by another that will focus on what we should do about it.

A leak of the final draft prepared by scientists at the end of October 2013 is circulating. It is not the final version, which will be a summary for policymakers that will be released on March 31, though there is unlikely to be much change. And, since government delegates at international talks in Japan this week will scrutinize the final draft before signing off for publication, what we have is effectively “the scientists’ cut.”

Past impacts reports from the IPCC were based around attempts to produce detailed forecasts of local climate in future decades and somewhat mechanistic assessments of what this would mean for society. But the new report is much more wary, especially of putting numbers on likely changes. Many previously firm-sounding forecasts have disappeared since the last major IPCC climate-impacts report in 2007, such as spreading droughts and crop losses in Africa and more violent hurricanes in the Atlantic.

The reason for avoiding precise forecasts is twofold. First, overly precise predictions got the authors of the 2007 report into trouble. The most famous faux pas was the claim that Himalayan glaciers would be gone by 2035, when 2350 is a more likely date. But there were other unsubstantiated forecasts, such as that “projected reductions in [crop] yield in some countries [in Africa] could be as much as 50% by 2020” — a misinterpretation of a paper, which was not peer-reviewed, that looked at rain-fed agriculture in just three North African countries.

The hundreds of authors of the draft report have been silent for some time, following IPCC rules by refusing to discuss their draft with journalists. But their chairman, Chris Field of the Carnegie Institution in Stanford, California, told me soon after taking on the job in 2009 that he recognized serious mistakes had been made last time and that he was “committed to sufficient checking and cross-checking to ensure a truly error-free product next time.”

Another reason for the more measured tone is that hopes that better science and greater computer power would allow more precise forecasts than seven years ago have often proved wrong. For parts of the world, model forecasts of regional climate change are diverging rather than converging. The more we know, it seems, the less we know for sure.

Caution is the watchword. Take the treatment of Africa. Last time, the chapter on that continent began with a declaration that up to a quarter of a billion Africans “are projected to be exposed to increased water stress due to climate change.” This time, the leaked draft states simply that while “a reduction in precipitation is likely over North Africa … projected rainfall change over sub-Saharan Africa is uncertain.”

The draft report lays out eight ‘key risks,’ including sea level rise and storm surges that could affect hundreds of millions.

The draft agrees that “climate change will amplify existing stress on water availability in Africa” and will “very likely” reduce cereal crop productivity. But this time the discussion is not about how big or small those reductions might be, but on how African farmers might cope with less water, through terracing and agroforestry for instance.

Asia has fallen into a similar forecasting limbo. Last time, the IPCC warned that there would be less water in most Asian river basins and up to a billion people could experience “increased water stress” as early as the 2020s. This time, “there is low confidence in future precipitation projections at a subregional level and thus in future freshwater availability in most parts of Asia.” Last time the IPCC predicted “an increase of 10 to 20% in tropical cyclone intensities” in Asia. This time it reports “low confidence in region-specific projections of [cyclone] frequency and intensity.”

Some certainties do remain. The leaked draft suggests growing agreement among climate modelers that Scandinavia and much of Canada will see more precipitation and that the southwestern U.S., southern Australia, the Middle East, southern Europe, and North Africa can expect more droughts and emptier rivers.

Southern Europe looks set to fry, with crops shriveling in the fields, reservoirs emptying, deserts spreading, tourists staying away, and demand for air conditioning going through the roof. Even its vineyards will suffer, though a reference in a March 2013 draft to Venice being “lost forever” beneath the waves has since been removed.

Globally, the draft report lays out eight “key risks”: sea level rise and storm surges in coastal areas that could affect “hundreds of millions… by 2100”; food insecurity for the poor from warming and drought; inland flooding of cities; loss of access to water for drinking and irrigation; breakdown of infrastructure due to extreme events; loss of fisheries, due to a “global redistribution of maximum catch potential”; loss of terrestrial ecosystems such as “forest dieback … in the next one to three decades”; and extreme heat, especially for the poor in cities.

But it asks us to be grown-up about the uncertainties involved in what plays out when. “Responding to climate-related risks involves making decisions and taking actions in the face of continuing uncertainty about the extent of climate change and the severity of impacts in a changing world,” the draft report says. Or as Field put it to journalists in 2010: “Most people spend their lives making decisions under uncertainty, and that’s what dealing effectively with climate change demands — the same kind of decisions you make when you decide to buckle your seatbelt.”

The 2007 report was almost all about the impacts of climate change. Most of this report, and in particular most of the summary for policymakers, is about resilience and adaptation to inevitable climate change.

Central to that new take is setting climate change in a context of other risks, uncertainties and mega-trends such as poverty and social inequality, urbanization, and the globalization of food systems. What some call “climate exceptionalism” — the idea that climate change is something of an entirely different order to other threats faced by the world — has been rooted out. Here climate change is painted as pervasive, since nobody can avoid it wholly, but as usually only one among many pressures, especially on the poor.

“Climate-related hazards constitute an additional burden to people living in poverty, acting as a threat multiplier,” it says. “Vulnerability is rarely due to a single cause.” Even for someone living on a sand spit in coastal Bangladesh, at constant risk of being washed away by rising tides and superstorms, the country’s pervasive land inequality may be a bigger threat.

On food security, the report is markedly more gloomy than the previous assessment in 2007.

Thus climate will exacerbate and amplify pre-existing problems. The report notes how a drought in Australia in 2007 sent global food prices soaring in 2008. But it cannot answer whether we should blame climate change or a dysfunctional food system.

Food security is, nonetheless, one area where the report is markedly more gloomy that its immediate predecessor. The 2007 assessment argued that increases in crop yields in mid-latitudes could offset losses in hotter climates, at least for the next few decades. “Globally,” it said, “the potential for food production is projected to increase with increases in local average temperature over a range of 1-3 degrees C.” But that optimism has faded. The leaked draft forecasts that “local temperature increases of 1 degrees C or more… are projected to negatively impact yields.”

Average yields of major grains could fall by up to 2 percent a decade from here until the end of the century, it predicts. With demand for food crops likely to rise by 14 percent a decade, that sounds a daunting prospect — though it also suggests that climate change is only a small element in the emerging 21st century crisis over global food security.

Some nightmare scenarios are robustly defused. Past IPCC reports have warned that there might be as many as 50 million “climate refugees” around the world, who will flee drought, rising tides and spreading deserts. This report is set to dismiss that idea. “The current alarmist predictions of massive flows of so-called ‘environmental refugees’ are not supported by past experiences of responses to droughts and extreme weather,” the draft says. “Predictions for future migration flows are tentative at best.” It also points out that migration is a good “coping strategy,” often to be encouraged rather than feared.

The report may irritate politicians in poor countries who look to blame climate change caused by the rich world for the ills of their people and want to demand reparations. But it may also dismay those who want to cite other factors to “prove” that climate change is never to blame. The world is more complicated, the scientists who prepared the draft conclude. The lesson of their report is that climate change will be implicated in a vast array of global ills, but it will rarely be the sole cause.

Climate change skeptics may want to characterize the report as debunking what they regard as the scaremongering of past reports. They may latch onto statements such as that “for most economic sectors,” factors such as changing demography, technology, lifestyles, and governance “will be large relative to the impacts of climate change.” And the report is, on the face of it, more optimistic than the famous review of the economics of climate change by Britain’s Nicholas Stern in 2006.

Stern put the likely cost to the global economy of warming this century at 5-20 percent of GDP. The new IPCC draft says that a global average temperature increase of 2.5 degrees from pre-industrial levels may lead to a global loss of income of between 0.2 and 2 percent.

But if Americans think this puts them in a good position, they are wrong. While the report is silent on whether there might be more or stronger hurricanes hitting North America from the Atlantic (and “Katrina aside,” saw no trend in U.S. hurricane deaths since 1970), it states that “much of North American infrastructure is currently vulnerable to extreme weather events.”

The message is clear. We may not be able to make hard and fast predictions, but prudency requires that we prepare for the worst.