China has committed to investing $360 billion to vastly expand its showcase network of high-speed trains, which already carry passengers at more than 200 miles per hour between some of the country’s largest cities.

Spain, despite its economic woes, is investing $170 billion to extend its acclaimed high-speed rail system, which now makes the 386-mile Madrid-Barcelona run in just 2 hours, 38 minutes — compared to six hours by car. A similar boom in high-speed rail construction is taking place throughout Europe, from the boot of Italy to the Baltic Sea.

The actions of the three governors undermine the job creation that they tout as central to their administrations.

And the United States? For the past several months the news on the high-speed rail front has been dominated by several governors, swept into power by the Tea Party movement, proudly proclaiming that they will have nothing to do with high-speed rail projects, which they contend are boondoggles. Indeed, the governors of Florida, Wisconsin, and Ohio have collectively rejected $3.6 billion in federal funds that would have covered nearly all of the cost of building rail lines on such routes as Orlando to Tampa, Milwaukee to Madison, and Cleveland to Columbus.

Fortunately, the foresight of the Obama administration and various states will ensure that the foundation of a national high-speed rail network will be laid in the coming years, with $8 billion in federal stimulus funds going to construct the first links in a high-speed rail network that is envisioned to stretch 17,000 miles by 2030. Bullet trains would eventually whisk people between all major U.S. cities — Los Angeles to Seattle, Dallas to Albuquerque, and Boston to Washington, at 220 miles per hour. The cost of such a network would be significant — $600 billion — but a combination of public and private funds would build the system, which would eventually yield benefits that far exceed the original investment.

For now, the U.S. funds rejected by governors Rick Scott of Florida, Scott Walker of Wisconsin, and John Kasich of Ohio, will be distributed to other states such as California and Illinois, which will benefit for years to come from the job creation and economic stimulus that will accompany the establishment of high-speed rail networks. In the future, the actions by these three governors will be viewed as folly, decisions that were made on ideological rather than rational grounds and that undermine the job creation that the three governors tout as central to their administrations. 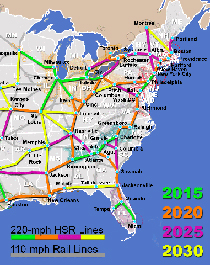 The decisions of the three Republican governors were not isolated acts, but rather a coordinated effort by the Tea Party and its allies to attempt to kill high-speed rail across America. Fortunately, 35 other governors — Republicans and Democrats alike — whose states were eligible for federal high-speed rail funding did accept U.S. grants for rail projects.

Last month’s decision by Governor Scott of Florida to reject federal funding for high-speed rail reflects the combination of bad information and partisan thinking that motivated all three governors to turn their backs on the future. In making his decision, Scott says he relied heavily on a January report by the libertarian Reason Foundation, which is funded by major conservative organizations, oil companies, and companies involved in highway construction.

The Reason Foundation report was riddled with inaccuracies, exaggerations, and distortions, such as a claim that the construction of the Orlando-Tampa line could cost Florida taxpayers $3 billion in capital cost overruns. That figure was arrived at by comparing the project in Florida to California, which faces far tougher right-of-way and land-use issues. The Tampa-Orlando line already has a long-established right of way on the Interstate 4 median, making it much cheaper to build. In addition, the eight international rail consortia seeking to construct the Florida line have guaranteed that they will cover operation, maintenance, and subsidy costs for 30 years.

The Florida line would connect Tampa and Orlando with Walt Disney World, one of the world’s top tourist attractions.

After rejecting the federal funds, Scott’s office issued a statement that he “is now focused on moving forward with infrastructure projects that create long-term jobs and turn Florida’s economy around.” Those new projects will require far more Florida tax dollars than would ever have been spent on the Tampa to Orlando line, prompting former Republican Governor Jeb Bush to express surprise at Scott’s decision. Fifteen Republican and 11 Democratic state senators in Florida also signed a letter to U.S. Transportation Secretary Ray LaHood asking him to ignore Scott and allow the legislature to work with the consortia to revive the Tampa to Orlando project.

In addition, a group of Florida mayors is speaking with LaHood about bypassing the governor and allowing an organization formed by the mayors to receive the federal funds and oversee the building of the Tampa-Orlando line. This effort underscores the broad, bipartisan backing for the project, as evidenced by the fact that eight business associations from 11 counties in central Florida are staunch supporters of the proposed rail line. One key reason: The line would connect Tampa and Orlando with Walt Disney World, one of the world’s top tourist attractions.

The reasons that so many disparate interests support the creation of a national high-speed rail network are glaringly obvious, and are becoming more so by the day. The United States has become far too dependent on foreign oil, with Americans consuming six times more oil per capita than Europeans, who enjoy better, faster, and cheaper mobility. The U.S now spends up to $700 billion a year to import foreign oil, 70 percent of which is consumed by cars, trucks, and airplanes. 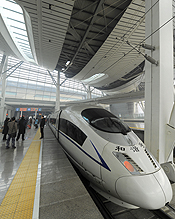 AFP/Gou Yige
Passengers board a high-speed train at a railway station in Beijing in 2011.

Now, for the second time in less than three years, the price of oil has shot up past $100 a barrel, threatening the fragile economic recovery. And most experts agree that the world has passed the point of peak oil, which means that as demand soars and supplies dwindle, oil prices could hit $300 per barrel this decade.

Enhancing U.S. energy security is just one reason the country needs a state-of-the-art high-speed rail system, which by 2030 could transport millions of people each day between America’s cities. A national high-speed rail system would generate millions of jobs; help revive the country’s manufacturing sector by creating a new industry producing the trains, steel, and related components; alleviate pressure on a crumbling transportation infrastructure; and lessen the ever-worsening congestion on America’s highways and at its airports, where delays cause an estimated $156 billion in losses to the U.S. economy annually. And then there is climate change and the large-scale reduction of CO2 emissions that would result from the creation of an interstate high-speed rail system and the expansion of regional commuter rail systems.

As a high-speed rail network spreads across the U.S. in the coming decades, the costs of operating the national transportation system will decline each year to the point where the savings will eventually exceed the estimated $600 billion cost of building the rail system. Although public funds will be used to cover much of the construction costs, the network will perform best if operated by private companies.

The U.S. must build a national high-speed rail network if it hopes to maintain its competitiveness in the world economy. China and Europe are now moving ahead with their high-speed rail networks at breakneck speed, which means that in a decade or two they will have significantly reduced their dependence on imported oil, created tens of millions of new jobs, and saved their countries trillions of dollars by vastly improving the productivity of their economies thanks to a low-carbon transportation sector that moves people and goods at speeds that could one day hit 300 miles per hour, or more.

The U.S. can be part of that future. But if more states follow the example of Florida, Wisconsin, and Ohio, the country will remain shackled by 19th- and 20th-century forms of transportation in a 21st-century world. Contemplate this image: China, Europe, Russia, South America, and other parts of the globe are streaking by at 250 miles per hour while the likes of Governor Scott are stuck in a traffic jam on an interstate, watching the trains whiz past.