Saguaros and palo verde trees flourish in the Sonoran Desert northwest of Phoenix along the road to Hieroglyphic Mountains Recharge, one of the Central Arizona Project’s groundwater banking sites. The shallow ponds, fed at one end by a burbling fountain, may look static, but the water is percolating down through the soil at a rate of about 3 feet a day, replenishing underground aquifers.

The 38-acre Hieroglyphic site is part of a statewide water-banking effort in Arizona that has stored around 9 million acre-feet of water underground as a hedge against population growth and possible cutbacks due to low Colorado River flows. It’s an impressive stash, the result of initiatives that are looking increasingly appealing to neighboring California, now suffering from a severe drought that idled more than 400,000 acres of farm fields last year and has led to the imposition of statewide water restrictions.

Groundwater — a key water source in California, supplying about 40 percent of human-used water in wet years and 60 percent in dry years — is disappearing rapidly in major California agricultural regions, such as the San Joaquin Valley, as farmers steadily drain underground aquifers. This is threatening the state’s huge agricultural sector and is causing the land to sink in some areas, harming critical infrastructure such as irrigation canals, roads, and bridges.

In the face of this grim reality, policy advocates and California officials are increasingly calling for initiatives such as large-scale groundwater banking, similar to Arizona’s, as a critical element of California’s water future. Last November, Californians approved a $7.54 billion water bond initiative, known as Proposition 1, that earmarks $2.7 billion for water storage projects, including improved groundwater storage and recharge. 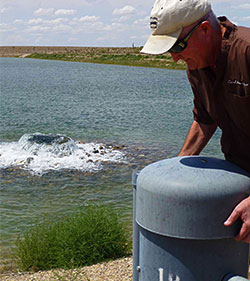 A hydrogeologist checks the level of a percolation pond at an Arizona groundwater banking site. ERICA GIES

But widespread groundwater banking in California still faces many legal, economic, and psychological obstacles. The barriers revolve around one core concern: Farmers and municipalities need reassurances that if they conserve water and store some of their allocation, they will be able to reclaim it later, either for their own use or for sale. Arizona has been able to overcome these obstacles with careful accounting that tallies how much water is stored underground and how much is withdrawn.

Around 22 basins in California — mostly urban — are already storing and banking groundwater. But dramatically expanding the practice to the other nearly 500 basins would help the state weather both long droughts and the climate change-induced melting of the state’s snowpack in the Sierra Nevada mountains, according to Lester Snow, executive director of the California Water Foundation, a non-profit seeking to address the state’s long-term water problems. Sierra Nevada snowpack has provided one-third to one-half of the state’s water storage. Yet this year’s snowpack was just five percent of the historic average, according to the state Department of Water Resources.

Losing the snowpack is a frightening shift for California. However, most climate models forecast that the state is likely to receive the same quantity of precipitation that it has historically; it will just arrive more erratically via bigger floods, accompanied by more frequent and more severe droughts. The climate shift requires water managers to change strategies and embrace techniques such as groundwater banking, experts say. “The goal is to capture higher flood flows when they occur and get them into groundwater basins so we have them for droughts,” said Snow.

Many people assume that water storage means more reservoirs. But in fact, most rivers in California are already dammed, said State Water Resources Control Board Chair Felicia Marcus. Yet underground aquifers contain at least three times the storage capacity of the state’s 1,400 existing reservoirs, according to Ellen Hanak, a water economist and director of the Public Policy Institute of California’s Water Policy Center. And underground storage is superior to surface storage because the water doesn’t evaporate, doesn’t have to be released preemptively to make room for floods, and is out-of-sight, out-of-mind, reducing pressure to allocate it.

One rural area has several groundwater banks because the sandy soil is perfect for conveying water underground.

It’s also cheaper, typically less than half the cost of reservoir expansion.

To convey water underground, some infrastructure is needed, such as Arizona’s percolation ponds. They can be built near existing reservoirs or alongside rivers in gravel beds originally constructed for stormwater flood control. Farmed floodplains can also be used after the growing season to sock away groundwater by removing constrictive riverside levees and replacing them with setback levees, which allow rivers to move into the floodplain when water is high. An experiment in the Sacramento Valley near Lodi enabled floodwaters to percolate in fallow farm fields and was deemed a success when a brief storm added 100 to 300 acre-feet of water to groundwater stores.

The urban basins, such as Orange and Santa Clara counties, that are already banking water are maintaining relatively stable water levels. Cities tend to bank treated wastewater and stormwater runoff rather than excess fresh water from rivers. The success of water banking in some urban or suburban areas is typically the result of earlier water conflicts that led to courts deciding percentages of water rights for various parties and appointing “water masters” to oversee allocations and resolve future disputes. In these so-called “adjudicated basins,” groundwater rights are no longer based on property rights — which allow you to pump what you need from your land — but rather are limited to your percentage of the “safe yield,” which is the annual amount of water that would naturally percolate into the ground. These basins revisit the safe yield figure regularly and adjust it based on existing conditions. 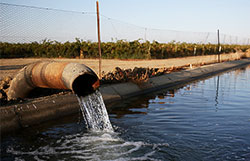 California’s drought has cut water available for irrigation canals, such as this one near Fresno. JUSTIN SULLIVAN/GETTY IMAGES

One rural area, Kern County in the southern San Joaquin Valley, has several groundwater banks, in part because the sandy soil is perfect for conveying water underground through percolation ponds. Ted Page, a farmer and president of the Kern County Water Agency, said that he started saving water in his local water banks because he understood that stanching groundwater overdraft was necessary to continue farming in the area.

“Without it, a lot of us would be gone already,” he said. In 2010, a good rain year, people in Kern County collectively deposited more than 1 million acre-feet of water over just a few months into Kern County groundwater banks. During the drought years since 2011, people have reclaimed that water, pumping out 250,000 to 274,000 acre-feet a year, he said. They still have water, though: County banks retain natural groundwater and deposits from earlier years.

However, water rights in the Kern County water basin have not been settled in court. As a result, people — particularly those with no surface water rights — continue to pump groundwater from their property, and that pumping isn’t regulated or even measured. Yet the water comes from the same aquifer that holds banked water.

That practice runs counter to the Public Policy Institute of California’s vision for effective groundwater banking, which requires careful monitoring of deposits and withdrawals. Otherwise, it amounts to depositing money in a bank to which everyone has the key,” according to a 2012 report.

But Kern County will soon have to change its ways, along with other agricultural regions that don’t manage their groundwater at all. That’s because last fall California passed the Groundwater Management Act of 2014, becoming the last Western state to regulate groundwater. Arizona passed an equivalent law in 1980, laying the foundation for its groundwater-banking program. California’s new law has come under criticism for its slow activation period, in which basins can delay full compliance for 25 years, but it will ultimately require communities that share groundwater basins to monitor their use and manage their shared resource sustainably.

Having a functional water market is an important incentive because users can profit from their conservation.

The measurement and management of both surface water and groundwater required by last year’s law should help to reassure individuals that if they conserve and store water, they can reclaim it later. But further reform is still needed in the water market, the law, and people’s attitudes, experts say.

Having a functional water market, in which people with excess water can sell it to those who need it, is an important incentive for getting people to store water because they can profit from their conservation. From the state’s perspective, the market is an important tool to reallocate water to those who most need it now without harming anyone’s long-term water rights.

But the current market is bureaucratic and opaque, meaning only large entities with the staff to manage the paperwork can participate. There is no online database tracking the buying and selling of water, a lack Snow deemed “crazy,” particularly in the state that spawned Silicon Valley’s tech and information industry.

Another deterrent to encouraging people to conserve water has roots in California’s “use it or lose it” provision, which says that if you don’t use your full water right, the state can reallocate it to someone else. By law, water rights holders must put their water to “beneficial use” — activities such as agriculture and urban use. In recent years, California has expanded the definition to include conservation and water transfers. That means water saved cannot be construed as wasted or unnecessary and therefore cannot lead to loss of water rights, said Brian Gray, professor emeritus of water law at the University of California Hastings.

Yet despite these protections, many people remain reluctant to sell water. “It’s a challenge of ego-system management,” said Marcus, “because people are more loss-averse than opportunity-motivated.”

Desalination has long been associated with one process — turning seawater into drinking water. But a host of new technologies are being developed that not only are improving traditional desalination but opening up new frontiers in reusing everything from agricultural water to industrial effluent.READ MORE

On a practical level, there is another huge barrier to widespread groundwater recharge in California. Currently, people can petition the board to allow them to store water, but it’s an arduous process. A bill now pending in the state assembly seeks to clarify approvals for underground storage.

The current drought is finally pushing Californians to get real about water reform, an opportunity that state policymakers have seized, exemplified by passage of last fall’s Groundwater Management Act. Ultimately, the new policies could lead to more responsible — even sustainable — surface water and groundwater management.

“We’ve set up a framework that, when fully played out, will be revolutionary in its effectiveness,” said Marcus. “But the devil is in the details, and there’s a long way to go.”