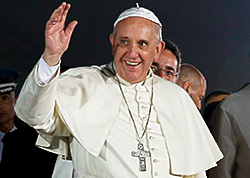 In his groundbreaking June encyclical, Pope Francis issued a call for robust individual action and a sweeping transformation of global economic and political systems to deal with the dual threats of climate change and environmental degradation. On Sept. 25, he will bring aspects of that message to the United Nations. Yale Environment 360 asked experts on the environment and religion what they would like the pope to say before the U.N. While many said the pope’s encyclical was a potentially transformative moment for stewardship of the planet, others would like Pope Francis to speak out about issues he overlooked or dismissed, including the role of population growth in environmental problems and the vital part that the private sector must play in combating global warming.

Bill McKibben is a scholar in residence at Middlebury College and a founder of 350.org, a campaign to reduce atmospheric carbon dioxide levels to 350 parts per million worldwide.

I think the pope has already done more than anyone could possibly ask: beautifully framed climate change for what it is, which is less an ‘environmental issue’ than an existential problem requiring a new/old way of looking at the planet. In concrete terms, the Roman Catholic Church does have large financial assets, which it uses to underwrite its many missions. It would be sweet if the pope said they were being divested from the fossil fuel industry, but really that work is up to the rest of us — in parishes, at Catholic colleges and universities, and so on. Because he’s given us all that we need to work with: an encyclical that describes our recent past as a civilization in unflinching terms, and lays out a straightforward (if daunting) prescription for transformation.

Katharine Hayhoe is an atmospheric scientist and associate professor of political science at Texas Tech University, where she is director of the Climate Science Center. She has worked at Texas Tech since 2005.

The pope gets what we scientists have known for a long time: Science doesn’t hold all the answers. Not for life, and certainly not for such a difficult and polarized issue as climate change.

There is a lot science can tell us. It can tell us that climate is changing; that — for the first time in the history of this planet — humans are responsible; and that our choices matter. The more carbon we produce today, the greater the risks and even the dangers we will face tomorrow.

But science can’t tell us what to do; that’s where our values come in. And for more than 80 percent of Americans, at least some of their values come from their faith. That’s why it’s so important that the pope gets it.

The pope is crystal clear on the connection between Christian values and climate change. He’s laid out in detail the relationship between God, people, and the planet. He’s connected the dots between poverty, vulnerability, and climate impacts. He’s left nothing to the imagination when describing the challenge we face today, and the attitudes we’ll need to conquer this challenge in the future.

There’s just one thing he hasn’t said — yet. He hasn’t called out those who are using God’s name as a cover for greedy, short-term thinking, for actions and attitudes that reflect love of self more than love of others.

Will he do it? I don’t know. But I do know this: He’s the right person to make that call.

Robert N. Stavins is the Albert Pratt Professor of Business and Government at Harvard University’s John F. Kennedy School of Government and a lead author of reports of the Intergovernmental Panel on Climate Change.

There is much in Pope Francis’ climate change encyclical that is commendable, but where it drifts into matters of public policy, it is less helpful. First, the pope neglects the causes of climate change. It is an unintended negative consequence of meritorious economic activity by producers producing the goods and services people want, and consumers using those goods and services. That’s why the problem exists, and hence it’s important to work through the market to solve the problem. Because of its global commons nature, international cooperation is necessary. Without properly recognizing this, it is difficult to identify meaningful solutions.

The pope rejects the use of carbon credits, because they “could give rise to a new form of speculation” and would “support the super-consumption of certain countries and sectors.” This rhetoric is straight from the playbook of the ALBA nations, the small set of socialist Latin American countries that are fearful of free markets and uncooperative in climate negotiations.

If the pope intended to refer only to offset systems and not cap-and-trade, the rhetoric might be less objectionable, but no distinction is made. Such an attack on market-based climate policies is out of step with the thinking of policy analysts around the world, who recognize that we can do more, faster, and better with the use of carbon taxes and/or cap-and-trade systems. U.N. Secretary General Ban Ki-moon has been outspoken in this regard.

Sadly, parts of the encyclical could ultimately work against effective climate policy at the international, regional, national, and sub-national levels. I hope these mistakes are not repeated in the pope’s U.N. speech.

Climate change is the number one global environmental justice issue of our time. No nation will be immune to this problem. We need Pope Francis to be the world’s number one climate justice champion, since the people least responsible for this global climate calamity will feel the hurt first, worst and longest — with the most damaging impacts felt by people who are already socially, economically, culturally, politically, and institutionally marginalized.

We urge him to use his bully pulpit to advocate for a just global climate action plan, including rich nations paying climate reparations to poor nations. We need him to use the world stage and his moral authority to insist government plans meet the highest ethical standards — standards best distilled in a quote by Mahatma Gandhi: “A nation’s greatness is measured by how it treats its weakest members.” We urge him to speak for the billions of voiceless — even when their leaders are silent or deny the existence of climate change. And finally, we urge him to challenge world leaders to rid their nations of racism, racial discrimination, xenophobia, and related intolerance which drive social inequality, fuel inter-group violence, cross-border conflict, and create millions of forced migrants and climate refugees.

Robert Engelman is a senior fellow at the Worldwatch Institute, where he directs a project assessing research on family planning, population, and environmental sustainability.

Considering humanity’s long future on earth, the most environmentally beneficial statement Francis could make would be to reverse the Catholic Church’s ban on effective modern contraception. That’s unlikely, of course. But the pope could at least acknowledge that his much-noted respect for science failed him when he dismissed reductions in birth rates as helpful to the preservation of climate and “Mother Earth” that his encyclical aims to encourage.

Francis asserted that “extreme and selective consumerism on the part of some” is to blame for climate change, with no contribution from population growth. Yet the Intergovernmental Panel on Climate Change has identified population and economic growth as tandem drivers of rising greenhouse gas emissions since the Industrial Revolution began. Dozens of peer-reviewed scientific papers published in the past decade affirm that population growth contributes, as well, to other environmental problems that worry the pope, particularly those that most threaten the poor.

At the United Nations, I would like to see Francis recognize not just the importance of population but the right of women to decide for themselves if and when to bear a child. I would like to hear him call for education and empowerment of women. I would like to hear him endorse couples’ use of family planning methods the Church can support. Few words he could say would more effectively point humanity toward a sustainable relationship with the earth and its climate.

Mary Evelyn Tucker, is a senior lecturer and research scholar at Yale University, where she teaches in a joint master’s degree program between the School of Forestry and Environmental Studies and the Divinity School.

The Papal Encyclical and Pope Francis’s upcoming speech at the U.N. provide an opportunity for us to rethink the interconnection of ecology, economics, and equity. Pope Francis proposes an “integral ecology” whereby issues of poverty, social justice, and environmental degradation are seen as one set of challenges.

This is an important moment for the environmental movement, which until recently has kept these issues rather separate. But now, with an invitation to integration, the pope is setting the stage for something fresh and path-breaking.

This is what I would like to see him carry forward at his speech at the U.N. What are the implications of this integrative perspective for how we live on a planet with diminishing resources and growing population? Or another way of saying it is, “What does it mean to envision ourselves as part of a common home?”

How, then, can we break through the rhetoric of politics, the models of science, the limits of economics, the prescription of law, and the ambiguity of technology to see ourselves as part of a shared planetary future? While all of these disciplines are necessary to solve our looming environmental/social crisis, they are not sufficient without an even more integral approach.

This will be the challenge for Pope Francis, to deepen the call of St Francis to a shared kinship with all creatures by inviting us into the perspective of a vast unfolding universe out of which all life has emerged. Will this not elicit from many the wonder and awe for sustained transformative action for the flourishing of our common home? Is this not the ultimate source of renewable energy for our times?

Evan Berry is an associate professor of philosophy and religion at American University and Co-Director of the Ethics, Peace, and Global Affairs master’s program.

Pope Francis’ encyclical, Laudato Si, offered a lucid, engaging application of Catholic social teaching to questions of global sustainability. The Holy See has done a remarkable job publicizing this document and using it to engage policy makers, civil society groups, and various public constituencies, both inside and outside the Church.

Although many of the encyclical’s critics are broadly dismissive of the threats posed by climate change, others raise more concrete objections. Most notably, there are those who worry that Laudato Si is anti-technological, expressing concern that it does not strike the right balance between solidarity with impoverished communities and the embrace of technological changes that will be required to implement a post-carbon economy.

Many experts agree that urbanization and continued innovation in energy production are essential to global efforts to sustain the more that seven billion people who now inhabit the planet. Efforts to combat climate change cannot rely on any large-scale return to subsistence agriculture without a substantial reduction of the human population. I would like to hear Pope Francis speak to this question and to address the under-appreciated tension between technophilic and traditionalist means of implementing sustainable development.