Ever since the last lonely dodo expired on Mauritius, in the Indian Ocean, islands have taught us much of what we know about the process of extinction. Conservation biology coalesced as a discipline, during the 1970s and 1980s, from efforts to understand the special problems that threaten small populations; and small populations are most commonly found on islands and island-like patches of habitat. Now another island phenomenon is delivering stark confirmation of one of conservation biology’s cardinal precepts: that small populations, having small gene pools and little genetic diversity, face large dangers from unpredictable environmental assaults, including disease. This latest news, weird and sad, comes from Tasmania, Australia’s island state, where the Tasmanian devil (Sarcophilus harrisii) is suffering an epidemic of contagious cancer.

The devil, a marsupial carnivore native only to Tasmania, has had an up-and-down demographic history since Europeans and their livestock colonized the island. 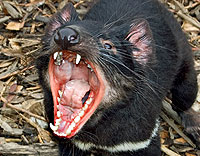 Perceived as inimical, like coyotes in the American West, it suffered bounty killing in the 19th century and poisoning with strychnine in the early 20th. By the time it became appreciated as an iconic element of Tasmania’s indigenous wildlife, it had passed through severe (but not precisely measurable) population bottlenecks — that is, periods of badly reduced abundance, during which devils were scarce on the landscape. Thanks to its high reproductive rate and opportunistic behavior, it had recovered nicely — at least in sheer numbers — and by the 1990s, according to one estimate, the wild population stood at about 150,000. But of course genetic diversity rebounds much more slowly than population size.

The first hint of a new kind of trouble came in 1996, when a Dutch wildlife photographer named Christo Baars noticed strange lumps on the faces of devils he photographed at a site in northeastern Tasmania. The lumps looked like boils, giant warts, or possibly … tumors? Baars showed his photos to Nick Mooney, a veteran wildlife officer with Tasmanian Parks and Wildlife, who had helped manage the species for decades but never seen such afflictions. Within several years, though, Mooney and others began finding similar growths on devils trapped for research purposes. One biologist, Menna Jones, euthanized three individuals from her field site on the east coast and brought them in for postmortem exams. The conclusion was provisional but alarming: All three carried malignant tumors of some inexplicable sort.

Tumors caused by what? Some experts suspected that a carcinogenic virus, passed among devils through social contact, was triggering tumor formation independently in each animal. This hypothesis might have explained the epidemiological trend that developed during the early 2000s, as the disease spread westward and southward, reducing devil populations in some areas by as much as 89 percent. But other observations needed explaining too: that the tumors were localized on faces (where devils commonly suffer bite wounds while scrapping for food and mates), and that all the tumors, from one animal to another, looked quite similar at the cellular level.

The notion of cellular similarity was dramatically supported by a study published in Nature in 2006. Based on karyograms (photos of chromosome structure), Anne-Maree Pearse and Kate Swift reported that eleven tumors from eleven different devils all showed the very same pattern of distinctive chromosome aberrations.

It’s not that evolution has made the devil tumor invisible. It’s that genetic impoverishment has made the immune system blind.

That is, the tumor cells resembled one another more closely than they resembled normal cells of the devil from which each tumor came. This seemed to refute the virus hypothesis and validate an even spookier idea—that the tumor itself is an immortal cell line, aggressive and successful, passing from devil to devil by contagion and taking root in one animal after another. To stress a point that’s so counterintuitive even biologists tend to misread it: The Pearse-Swift work showed that devil tumor has no parallel in human papilloma virus or any other cancer-triggering pathogen, in that it’s the tumor cells themselves, not some virus, that are contagious.

Contagious cancer? That’s not supposed to be possible, is it? Most of us outside the medical research profession have been led to believe, as an absolute verity, that cancer is not an infectious disease. It arises from within. It involves runaway cell replication, not infection from outside, and the cell line that’s replicating uncontrollably has originated (so we’ve been led to think) as one of the victim’s own cells, gone haywire. You can’t catch cancer from someone else, as you might catch a cold, the flu, a bacterial disease, or even a cancer-triggering virus. Isn’t that true? Well, yes, mostly. But the verity turns out to have exceptions.

One exception, well documented in the scientific literature, is something called canine transmissible venereal tumor (CTVT), a sarcoma that passes among domestic dogs as a form of venereal disease. CTVT has been traveling from dog to dog, around the world, for at least 200 years—which makes it, almost certainly, the oldest continuous lineage of mammalian cells on Earth. The other exception is this Tasmanian case, now known to those who study it as Devil Facial Tumor Disease (DFTD). Apart from CTVT and DFTD, there are no other known forms of naturally transmissible cancer among animal species, including Homo sapiens. (Laboratory experiments and surgical accidents are another matter.) The phenomenon is rare and improbable for several reasons, chief among which is that properly functioning immune systems protect individuals from colonization by foreign tumors.

Then again, bacteria and viruses and other pathogens routinely invade our bodies and cause disease, achieving temporary and sometimes terminal victory against the immune system. How can they succeed in a way that tumor cells (generally) cannot? Partly the answer is that bacteria and viruses and malarial protozoans and other pathogens are well adapted for exactly such acts of parasitism—invading a host, hiding from or resisting immune attack, proliferating within the host’s alien physiological environment—whereas tumor cells (generally) are not.

But tumors can evolve, by natural selection, much as species do. In the cancer literature, that’s known as clonal evolution, because it entails competition and selective survival among cell lines (clones), not among organisms. Such clonal evolution can yield surprising consequences. For instance, some tumors are adapted for parasitic life and transmission between hosts. Case in point: CTVT. During its two centuries or more of existence, the canine transmissible venereal tumor seems to have acquired a liberating adaptation: It has muted (downregulated, in the scientific jargon) the protein signals (antigens) on the outside of each tumor cell, just enough to evade recognition and attack by immune-response cells. That is, it has made itself invisible to the immune systems of the dogs it enters.

A Tasmanian devil with a facial tumor. DPIW TASMANIA

The case of DFTD is different. The devil tumor is evidently much younger than the canine tumor, and its evolution hasn’t progressed so far. But downregulation of its antigens doesn’t seem to be necessary, because of a peculiarity of the Tasmanian devil: that severely low genetic diversity, a residual effect of population bottlenecks during the era of its persecution. (Another circumstance contributing to its low genetic diversity, over the longer term, may be the very fact of its containment on an island, with population levels somewhat restricted even during good times.) Low genetic diversity means that the devils are extraordinarily similar to one another, almost like an inbred lineage of laboratory mice. Such similarity can yield health problems of several sorts, one of which is an inability of the immune system to distinguish between self and nonself — or, in this case, between me-devil and you-devil. That inability offers a vast opportunity for the tumor, which leaps from one devil to another without provoking immune response. And here’s where DFTD differs from CTVT. It’s not that evolution has made the devil tumor invisible. It’s that genetic impoverishment has made the immune system blind—at least, blind to the distinction between one devil and another.

This was all suppositional until a year ago, when a new study of the devil genome confirmed it. Hannah V. Siddle, of the University of Sydney, and her collaborators used several genotyping methods on tumor and blood samples from a number of devils to look for diversity within the major histocompatibility complex (MHC). The MHC is the group of genes that create proteins responsible for immune-system discrimination between self and nonself. The Siddle paper, published last year in the Proceedings of the National Academy of Sciences (www.pnas.org), reported finding virtually no variation among those crucial genes from devil to devil. Little wonder, then, that the poor animals share their tumor. They share so much else in common — too much for their own good.

“This study,” the Siddle group wrote, “provides a frightening example of the potential consequences of loss of genetic diversity in a region of the genome that is vital for self/nonself recognition as well as disease resistance.”

What will happen to the Tasmanian devil? Siddle’s group couldn’t say. No one, right now, can say. It’s impossible to foresee whether the disease will carry Sarcophagus harrisii to the brink of extinction, or whether some desperate combination of measures (culling, barricading against the tumor’s spread, captive breeding, quarantine, release of tumor-free devils on an offshore island) might offer hope of saving it in the wild. As the Siddle group concluded, the best time to cope with the problem of genetic impoverishment is before that problem occurs: “These findings reinforce the need for conservation biologists to focus on genetic diversity at functionally important loci that play a role in population fitness when designing conservation strategies.”

It’s impossible to foresee whether some combination of conservation measures might offer hope of saving the Tasmanian devil in the wild.

Behind the dry language, behind the genetic complexities, lie old truths we know well: keep habitat abundant and intact, and don’t let a species become rare.

This article by David Quammen for Yale Environment 360 is a new look and an update on the Tasmanian devil and tumor evolution, a subject he first covered in a feature article, “Contagious Cancer,” which appeared in Harper’s Magazine in April, 2008.