When it comes to the Obama administration’s recent move to open portions of the Atlantic coast to oil exploration, I’m a bit out of synch with environmentalists who are worried about the big spill. They warn of another Deepwater Horizon or Exxon Valdez-type fiasco coming to the Southeast. But to me, it’s just about the day-to-day business of chasing oil, the wrong-headedness of it all. 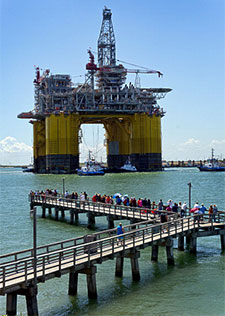 It’s not that I don’t have some personal history with the major oil calamities of recent decades; I do. In my early teens the first televised images of oil-coated birds during the 1969 blowout off Santa Barbara shocked me and the nation, inspiring the first Earth Day and propelling a burst of environmental laws. Twenty years later, at home working on a scientific paper, I heard the radio’s news of the Exxon Valdez’ rupture and of thousands of oiled birds and otters, and began sobbing at my desk. A decade later, I visited Cordova, Alaska, and saw how the pain and disruption from the spill had seeped into lives of the people there as thoroughly as the oil had seeped into shoreline sediments and the livers of waterfowl. And in 2010, I spent a lot of time along, on, and above the Gulf of Mexico while oil freely gushed from the hole that BP had made in our coastal soul. There was the failure of the ‘blowout preventer’ to prevent the blowout, the crazy “junk shot” attempt to jam golf balls and shredded tires down a gushing well against the force of the upward-shooting oil, the ghastly photo of the nearly unrecognizable brown pelican jacketed in crude as it died. My chronicle of that summer of anguish became the book A Sea in Flames.

I’ve been thinking about all this since President Obama last month proposed opening a large area off the Eastern Seaboard to oil exploration and potential drilling. Every five years, the Outer Continental Shelf Lands Act (“lands” meaning the ocean floor) requires that the president propose a plan for accessing offshore energy, and Atlantic drilling is part of Obama’s proposal. In December, he put the waters of Bristol Bay, Alaska, off-limits to oil and gas development. Hail to the chief on that — the largest surviving salmon runs in the world, millions of fish annually, converge on that stellar bay. In the five-year proposal, announced in January, the Obama administration likewise closed some relatively small parts of the Beaufort and Chukchi Seas off Alaska to oil and gas development, citing “world-class fisheries and stunning beauty.”

If you look at maps of the affected areas, the impression is of vast expanses of ocean newly open for business.

But his plan also would open new drilling leases in the central and western Gulf of Mexico. And most contentiously, the president wants to open Atlantic Ocean waters off Virginia, the Carolinas, and Georgia, where drilling has never occurred and no exploration has been allowed since the 1980s. If you look at maps of the affected areas, the inescapable impression is of vast expanses of ocean newly open for business.

“This is a balanced proposal,” said Interior Secretary Sally Jewell, acknowledging that it “would make available nearly 80 percent of the undiscovered technically recoverable resources.”

If 80/20 is “balanced,” then Obama is “consistent.” In 2008, candidate Obama had attacked John McCain’s proposal to expand offshore drilling, saying, “It would have long-term consequences for our coastlines … When I’m president, I intend to keep in place the moratorium.” In early 2010, he erased that promise with a proposal to end the moratorium on oil exploration along the East Coast from the Delaware to Florida. But weeks later, the Deepwater Horizon went up in flames and sank a mile to the seafloor. It also sank Obama’s East Coast plan, which he withdrew. Now it’s back.

During that summer of anguish in 2010 while I was witnessing the debacle in the Gulf, I got an invitation to appear on “The Colbert Report.” During the show, Stephen Colbert expressed alarm as a native South Carolinian that the oil might come up the coast and get into the South Carolina marshes. “Those are my marshes,” he said, sounding every bit the homeboy. I never thought the slick would leave the Gulf, and it didn’t. But Colbert’s concern about his beloved marshes is now grounded in possibility.

I’d seen Colbert’s marshes while researching my book on sea turtles. Sally Murphy of the South Carolina Department of Natural Resources took me on an aerial survey of leatherback turtles migrating up the East Coast during springtime. Many of them weigh nearly half a ton and are six to eight feet long and three or four feet wide with five-foot flippers, so you can see them from the air. As we flew from the airport toward the ocean in a light plane, I wrote, “Soon, we’re over a mosaic of wooded islands inlaid into emerald marshes, grouted with wriggling creeks, spanning expansively toward the coastal contour. The verdant sprawl of a blossoming summer, languid and luscious, stretches to the planetary curve.” They’re still the most beautiful coastal marshes I’ve ever seen. It’d be nice if they could stay so.

The main disaster is the oil we don’t spill. It’s the daily grind of oil extraction.

I’ve also seen the Mississippi Delta from the air. I saw America’s greatest marshes lie dissected, bisected, and trisected, diced by long, straight artificial channels, all aids to access and shipping. For the vast multi-million-acre emerald marshes, it is death by a thousand cuts. Oil and gas companies have dug about 10,000 miles of canals through the oak and cypress forests, black mangroves, and green marshes, killing coastal forests and subjecting our greatest wetlands to steady erosion. Louisiana has lost more than 2,300 square miles of wetlands; each year, another 25 square miles of marsh disintegrate. Oil leak or no leak, everything about getting oil is perpetuating the most devastating disaster that’s hit America’s wetlands.

That’s why, as the oil was gushing in 2010, I came to the conclusion that the main disaster is the oil we don’t spill. It’s the daily grind of oil extraction. That’s why I find myself not worried so much about big accidents as about the day-to-day.

Sally Murphy, the sea turtle surveyor who’s now retired after 33 years, says, “People think we’re worried about spills. Mainly, it’s not a fear of a big spill. But everything else: the tanker traffic, the storage tanks, the increased highways, railways, the omnipresent smell of petrochemicals. You might get an occasional big spill,” she says, “but it’s the daily, chronic, minor spills that just pollute everything. Go to Houston, and you get the picture. It’s infrastructure, and port expansion. On this coast you’ve got Myrtle Beach, you’ve got the biosphere reserve, Cape Romaine and the ACE Basin’s protected areas and estuarine reserves, and south of that you’ve got all the resort islands. Tourism is our number one industry. So all the stuff that would be needed for oil drilling — where will it go?”

And then, yes, there is the possibility of a blowout or major spill. You can see from the BP spill, Murphy points out, that “when that stuff gets on every blade of grass in the marsh, there’s no getting it out. It’s in the sediments for decades. And our marshes are our most precious possessions.”

The seashore towns and local officials are leading a charge against oil exploration.

The coast-state governors seem to want the jobs being dangled before their eyes, but right now the seashore towns and local officials are leading a charge against oil exploration. They’d like to keep the multi-billion-dollar tourism that comes for lovely shores and clean waters. The towns of Beaufort and Port Royal, South Carolina, have each passed a resolution objecting to oil exploration off the coast. The resolution notes in part that during explorations for oil, “seismic air-guns fire intense blasts of compressed air … as frequently as every ten seconds, for days to weeks at a time and are loud enough to harm marine life.”

Although actual drilling wouldn’t happen for years, the seismic work is much closer to moving forward. A 2012 draft environmental impact statement estimated that the seismic surveys would cause millions of instances of harassment to whales and dolphins annually.

And yet to the concern that whales and dolphins may experience injury or pain, or be forced to flee feeding areas, chief environmental officer for the federal Bureau of Ocean Energy Management Bill Brown has noted that there is “no documented scientific evidence of noise from air guns … adversely affecting marine animal populations.”

ALSO FROM YALE e360A New Frontier for Fracking: Drilling Near the Arctic Circle

Hydraulic fracturing is about to move into the Canadian Arctic, with companies exploring the region’s rich shale oil deposits. But many indigenous people and conservationists have serious concerns about the impact of fracking in fragile northern environments.READ MORE

I asked whale expert and conservationist Ken Balcomb about this seeming discrepancy. He was the first person to document the killing of whales by U.S. Navy sonar. “The population-level argument is definitely a weasel,” he said. “Brown must know that there are many cases of air-gun use leading to injury and death of marine mammals, but proving population-scale impacts is problematic in a field where obtaining such proof is not conducive to continued employment. If he doesn’t know that, he is in the wrong job.”

The Navy’s marine mammal kills are documented. Yet the ships and equipment used in geological and seismic exploration move much slower than Navy ships. So with seismic exploration, marine animals often have time to move away from the noise before they are in the zone of injury. Slowly ramping up air-gun noise is another way to let mammals get out of the area. But “the area” happens to be where they live and hunt for food. They’re there because it’s where they need to be.

That’s our cue. None of this has to happen. Comments are due March 28.

Some analysts say we will never actually need this oil, that already-known reserves would take us well into catastrophic climate change and we’ll be off the stuff by then. The nonprofit group Oceana claims that wind would provide far more jobs, longer, without danger of spills. These claims seem suspect because the conclusions are what you’d expect given their source, just as petroleum companies argue that this oil is crucial. I do know, though, that thanks to oil industry lobbying and subsidies, we have built no viable clean alternative to oil. I think this is as good a place as any to stop the advance of the fossil fuel footprint. The jobs we get are the jobs we plan for. Let’s plan for clean energy, offshore and onshore, instead.