I once stumbled out of a jungle in the Congo Basin and startled two Bantu farmers — both women — tending a small field. I spoke no Bantu and they no French, and so we just stared at each other, a little warily, until one of their toddlers wailed and we all shared a laugh.

For the Bantu, farming has changed little in 3,000 years. The women still work small farming plots made by slashing and burning the rainforest. 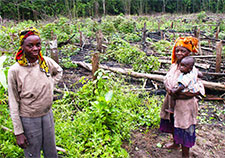 Small-scale farmers, such as these Bantu women in Gabon, have a relatively light impact on the environment. WILLIAM LAURANCE

They plant crops like yams and bananas, while their men hunt or talk village politics. It’s a precarious existence, but the slash-and-burn farmers can eke out a living if their numbers are low enough and game abounds in the nearby forest.

Increasingly, though, this picture is changing. The Bantu are multiplying quickly, as are many other peoples across Africa. The United Nations’ mid-range population projections for the continent are staggering, with the number of Africans expected to nearly quadruple from 1.1 billion today to 4.2 billion in 2100. Feeding that populace will be an enormous challenge, requiring, among other things, a gigantic boom in agriculture.

The world’s tropical regions will surely be the epicenter of the scramble to increase food production for a global population projected to soar from 7 billion today to 11 billion by the end of the century. The tropics are where crops grow the fastest, where land is often relatively cheap, and where food demand will surge the most. But the rapid agricultural expansion in tropical regions will have profound environmental consequences for rainforests, savannas, and other ecosystems already suffering widespread destruction.

The key question facing agricultural experts, scientists, and conservationists is whether this expansion of food production can be accomplished using a reasonably small area of the tropics, or whether unsustainable agricultural practices will gobble up large ecosystems in Africa, South America, and Asia.

If we farm as we’ve done in the past, we’d need an area the size of Canada of new farmland.

Two colleagues and I recently wrote a major review paper on the dramatic growth of tropical agriculture this century and its likely impacts on ecosystems and biodiversity. It was a sobering exercise. For starters, global food demand is expected to double by 2050. That’s a daunting prospect given that we already farm an area the size of South America and graze livestock over an area the size of Africa. This rising demand is being driven not only by population growth but also by increasing meat, poultry, and dairy consumption in the world’s emerging economies.

How much additional farmland will we need? That, it turns out, is a topic riddled with uncertainties. A research team led by ecologist David Tilman of the University of Minnesota extrapolated linearly into the future, assuming we’d continue farming much as we’ve done in the past. Under those conditions, they estimated, we’ll need around 1 billion hectares of additional farmland — an area the size of Canada.

However, a panel of experts at the U.N. Food and Agricultural Organization produced a far sunnier estimate. They suggested that agricultural yields in developing countries could double by 2050 and that we’ll require just 120 million hectares of additional farmland by mid-century — about the size of South Africa.

Why is the second estimate so much lower? Unlike the first, it assumes agriculture will change profoundly in the coming decades — that, via a Herculean effort, we will continue the remarkable strides in farm production seen during the Green Revolution.

The adherents of this view look at small-scale farming like that practiced by the Bantu farmers and see serious inefficiency — a large gap between how much food is being produced now and what could potentially be grown using modern agrotechnology. They want to turbocharge tropical farming by bringing in investment, fertilizers, machinery, and modern crop varieties, including, potentially, GMOs. They also want to improve irrigation, transportation, and energy infrastructure, and replace small farms with bigger farms and agribusinesses. Forget little plots of bananas and yams — this is about vast fields of soy, oil palm, and sugarcane.

Low-intensity farms will increasingly be replaced by intensively managed monocultures.

Such a dramatic transformation is already happening in many tropical regions and it is probably unavoidable to a degree, because industrial-scale farms unquestionably produce more food per hectare than do small-scale farmers. But what are the implications?

Although they are more efficient, large-scale farms come with well-known environmental costs. Profitable, intensively farmed crops such as oil palm and soy are already expanding rapidly in the tropics, often at the expense of forests. In addition to causing outright habitat destruction, the proliferation of such crops means that human-dominated lands will become more hostile to biodiversity. Low-intensity farms that feature a variety of crops will increasingly be replaced by intensively managed monocultures.

Agricultural intensification will also mean a lot more infrastructure — more roads, railroads, hydroelectric dams, and power lines. Roads are expanding rapidly into the world’s last tropical wildernesses and are bringing with them forest colonists, hunters, gold miners, and land speculators. For instance, dozens of major new ‘growth corridors’ for roads and land development are being planned in sub-Saharan Africa. Tanzania’s central corridor will cut across the country to access gold, copper, and other minerals in central Africa. The Maputo corridor will penetrate into southern Africa for the exploitation of heavy mineral sands. Both will open vast expanses of land to colonization and farming.

Intensifying agriculture could have serious impacts on biodiversity. Large-scale farmlands are likely to create impassable barriers for many species, contributing to the corrosive effects of isolation on wildlife populations. In India, for instance, it’s been shown that tigers can move hundreds of kilometers across landscapes peppered with small-scale farms, but it’s difficult to imagine this happening if intensive, large-scale farms were to become the dominant land use there.

Farming is the main reason that tropical forests have retreated from 17 to 11 million square kilometers.

Already, many nature reserves in the tropics are becoming isolated as expanding human populations and land uses encircle them. In a 2012 study, my colleagues and I showed that tropical forest reserves encircled by hostile, human-dominated lands suffer far more serious losses of biodiversity than do those surrounded by native vegetation. To a degree, the nature reserves act like mirrors — reflecting the biological condition and health of ecosystems around them.

Which tropical regions will be most affected by the coming avalanche of land-use change? Experts see especially dramatic changes ahead for sub-Saharan Africa and South America. Agriculture will expand not only in biodiversity-rich rainforest areas such as the Congo Basin and Amazon, but also in semi-arid ecosystems such as the Pantanal of South America and the Guinea and Miombo savanna-woodlands of Africa — areas also profoundly important for nature. These drier habitats sustain some of the most densely populated wildlife communities in the world, including most of Africa’s iconic large mammals such as savanna elephants, lions, zebras, and giraffes.

In the tropics, much has already been lost to agriculture. Farming is the main reason that tropical forests across the planet have retreated over the past century from 17 million to 11 million square kilometers, with remaining forests projected to shrink by another third by 2050. Forests have been hugely diminished in many tropical regions, such as the Brazilian Atlantic forests and the island forests of the Philippines and Madagascar, among many others. Forests in these areas persist mainly as small, isolated fragments that have been overhunted or scarred by fires or logging.

Intensive farming should be concentrated in areas where vegetation has already been cleared.

There is no getting around the fact that feeding up to 11 billion people is going to have profound effects on tropical nature. What can be done to minimize the impacts?

One key goal, I believe, is to concentrate intensive farming into areas where the native vegetation has already been largely cleared. This would allow farm yields to be increased while hopefully sparing forests and other wildlife habitats for nature conservation.

We’re a long way from achieving this, however, given the rapid and rather chaotic way that agriculture is spreading throughout the tropics. To control the burgeoning footprint of agriculture, we need more stringent and effective land-use zoning and enforcement. This must include efforts to limit road expansion into tropical forests. For this reason, my colleagues and I are currently developing a ‘global road-map’ to help guide road expansion in the future — identifying areas where roads should and should not be allowed, to maximize their benefits for agriculture while minimizing their overall environmental costs.

Our goal is to see this global road map integrated into land-use planning — especially in developing nations, which is where most new roads are being constructed. We plan to promote our scheme via a website that provides easy access to high-resolution zoning maps and alliances with others working internationally on road-planning issues. By proactively identifying the areas where roads will cause the greatest environmental harm and generate the fewest benefits, we believe we can have a positive influence.

Although large-scale agriculture will probably expand a lot, there will still be many millions of small-scale farmers in the tropics. A key goal here is to introduce principles of landscape design and agroecology to make small-scale farming more efficient — raising crop yields and sustainability while also helping them be as nature-friendly as possible.

We must also bear in mind that the 21st century will be a time of enormous change and challenges. How much land gets converted to farming, and what kinds of farming, could ultimately depend on such factors as the amount of land devoted to biofuels and the stability and price of energy supplies, which are crucial for intensive mechanized agriculture. Another wild card is the specter of future climate change and how this will affect farming and nature. And of course a key issue is whether soaring birth rates in places like sub-Saharan Africa can be brought under control through effective family planning.

To counter such uncertainties, phrases such as ‘resilience’ and ‘adaptation’ need to be at the forefront of our thinking. Our great challenge is to forge a future where peoples such as the Bantu and tropical nature can both flourish.