Six years after the last negotiations crashed so spectacularly in Copenhagen, climate delegates assemble in Paris this week to fix the world’s atmosphere. This time, despite the high security following the recent terrorist attacks in the French capital, they will meet in a better mood. 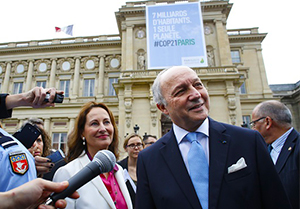 That’s because, in the preceding months, more than 150 nations have put pledges for future emissions on the table for the decade between 2020 and 2030. And the world’s biggest two emitters of heat-trapping greenhouse gases — the U.S. and China — are in harmony after a bilateral agreement in Washington last year.

But if the diplomats enter the home stretch more optimistic than in Copenhagen, climate analysts warn that the national “contributions” on offer still don’t meet the negotiators’ self-declared task of capping global warming at two degrees Celsius. About 2.7 degrees is the most optimistic guess of the long-term outcome of the pledges. A victory for diplomacy should not be confused with a victory for the climate.

So, is the glass half full or half empty?

On the downside, time is running out to halt the continuing accumulation of greenhouse gases in the atmosphere. This year, the world is a record one degree warmer than pre-industrial levels — exactly halfway to the two-degree ceiling. The much discussed warming hiatus of the past decade is over.

A strong agreement on climate in Paris would drive change forward.

But on the upside, energy technology is changing fast for the better. A decade-long boom in coal burning is turning to bust. Onshore wind power is now as cheap as coal in much of the world, and solar is closing the gap fast. Half of all investment in new power plants last year went to renewables, with the majority of that now in developing countries. In 2014, the global economy grew by 3 percent without any increase in emissions of carbon dioxide, the main warming gas.

Changes in energy markets are afoot that are largely independent of international climate negotiations. Even so, a strong agreement in Paris would drive change forward. So how much will the national promises submitted to the conference on emissions — known in United Nations jargon as Intended Nationally Determined Contributions (INDCs) — deliver?

That 2.7 degree forecast comes from Climate Action Tracker (CAT), a consortium of European researchers put together by former Greenpeace climate campaigner Bill Hare. CAT carried out a detailed analysis of INDCs submitted from countries that are responsible for about 90 percent of current global emissions.

The calculations were not straightforward. The pledges have different baseline years (1990, 2005, or 2013), different targets dates (2025 and 2030), and different strategies for forests and land use (which in some developing countries are the largest sources of emissions). Worse still, while some countries promise cuts in absolute emissions, others promise reduced emissions for every dollar of GDP, while still others offer divergence from “business as usual,” which can be defined almost any way they choose.

The INDCs are also voluntary, and it is most unlikely that Paris will make them legally binding. Some environmental groups will protest, but the fate of the “legally binding” targets agreed in the Kyoto Protocol 18 years ago suggests that the words have little practical value.

CAT’s conclusion that the INDCs could deliver a limit on warming of 2.7 degrees is not universally shared. Climate Interactive, a not-for-profit consultancy in Washington, D.C., puts the outcome at 3.5 degrees. The difference arises largely because CAT presumes that post-2030, countries will continue to make a “similar level of effort” to keep on reducing emissions, whereas Climate Interactive calculates the outcome if efforts stall thereafter. This latter approach seems to many unduly pessimistic given the wider changes to energy generation already underway.

The devil may be in the detail, however. Every country has its own story.

We have known for a year now roughly what is on offer from the U.S. and China — which together are currently responsible for 40 percent of global CO2 emissions. U.S. emissions have fallen since 2007, thanks to a mix of fracked gas replacing coal and rising energy efficiency, and Washington now promises a total reduction of 27 percent from 2005 to 2025.

China’s long march forward in emissions, which took it past U.S. levels almost a decade ago, appears to be slowing at last. Driven in part by an economic downturn and public anger about smogs, China is pulling back from coal, the dirtiest fuel. Coal burning in the first half of 2015 was down 5 percent from 2014. Coal-fired power stations are being mothballed. Meanwhile, the country’s largest wind power company, China Longyuan, reported power generation up 22 percent last year.

China says the change in fuel mix will be permanent, and it promises peak CO2 emissions by 2030. Fergus Green, at the London School of Economics, reckons that could be overly cautious. On current trends, he reported in June, Chinese emissions “are likely to peak by 2025, and could well peak earlier.”

But the biggest cause for optimism in recent weeks has been the October publication of India’s INDC. India matters at least as much as China and the U.S. The country has the world’s fastest growing population, the fastest growing economy, and the fastest growing electricity market. Under Prime Minister Narendra Modi, it wants to be the new China. There has been some belligerent talk from New Delhi about refusing to have its economic development held ransom by rich nations.

So its INDC came as a huge relief. It promises to deliver industrial transformation on the back of what the Potsdam Institute for Climate Impact Research, in an analysis of INDCs, calls “the most ambitious renewable energy programme in the world.” By 2030, India promises that some 40 percent of its installed electric power capacity will be renewables. That will include 100 gigawatts of solar capacity — a 30-fold increase on current capacity, and the equivalent of replacing 100 large conventional power stations.

Such is the expected surge in demand for energy that India will, even so, be burning more coal than today, and emitting around 60 percent more CO2 by 2030. But its promised solar revolution will be a massive turnaround from what might have been — enough to cut carbon emissions for every dollar of GDP by 33 to 35 percent.

Other INDCs from emerging economies are less encouraging. Brazil promises a 43 percent cut in emissions from 2005 to 2030. It sounds great, until you realize Brazil has already almost reached that target, largely on the back of an 80 percent reduction in the rate of deforestation in the Amazon over the past decade. Brazil actually plans to increase the carbon intensity of its economy from now, replacing hydropower with coal. The Union of Concerned Scientists this month accused Brazil of “resting on its laurels.”

And nobody knows what to make of the INDC from Indonesia. The country has replaced Brazil as the world’s biggest deforester, and forest loss and drainage of peatlands for agriculture are currently responsible for 60 percent of its total greenhouse gas emissions. During the recent forest fires, Indonesia was emitting more than the U.S.

The Indonesian INDC promises to reduce greenhouse gas emissions by as much as 41 percent below business-as-usual. But CAT’s Niklas Hohne points out that the INDC nowhere says what business-as-usual means in Indonesia’s forests. On recent trends it would mean a doubling of emissions from that source by 2030. If so, a 40 percent cut would still mean a 60 percent increase in emissions.

Anyone who believes a successful outcome in Paris will solve the climate problem has another think coming.

Meanwhile, there are some undisputed bad boys. Russia promises a 25 to 30 percent cut in emissions from 1990. But remember Russia’s emissions almost halved when the Soviet empire collapsed just after 1990. So the apparent cut actually hides an increase in industrial emissions from today of more than 30 percent, according to Hohne. And under Canada’s pledge, non-forest emissions will continue to rise, partly through burning tar sands. Heavily industrialized South Korea expects to double its emissions between 1990 and 2030.

The INDCs are a very mixed bag. But if all were fulfilled, where would this leave the world in 2030, the year the Paris treaty would expire? Optimists see a different energy landscape emerging, with renewables dominating electricity production in most large countries. According to the Potsdam Institute’s analysis of six leading economies — Brazil, China, Japan, India, the U.S., and EU — emissions for every unit of electricity generated will have fallen by an average of 40 percent, and the amount of energy needed to transport one person one kilometer will be down 30 percent.

But pessimists note that even such reductions in the carbon intensity of economies would not keep pace with rising demand for energy. According to the U.N. Environment Programme (UNEP), it would leave global emissions in 2030 at around 54 gigatons of CO2, compared with today’s 48 gigatons. But at least they would be well down on the 65 gigatons thought likely under a business-as-usual scenario published by the Intergovernmental Panel on Climate Change last year.

The problem is that halting warming requires not moderating increases in emissions, but bringing those emissions down to close to zero. And to halt warming at two degrees will probably require doing that by not long after the middle of the century. Starting from 54 gigatons in 2030, that will still be possible, says UNEP, but it will be getting pretty hard — and expensive. UNEP estimates that the least-cost route to two degrees would require getting emissions down to 42 gigatons by 2030.

Amid tensions between the U.S. and China, one issue has emerged on which the two nations are finding common ground: climate change. Their recent commitments on controlling emissions have created momentum that could help international climate talks in Paris in December.READ MORE

It should be said that these scenarios make assumptions about how sensitive the atmosphere will be to greenhouse gases. The error bars on that are still substantial. But most likely, long before 2030, it will be abundantly clear that much more is needed to stop at two degrees. Both the Potsdam Institute and CAT say it is important for the Paris agreement to include fixed points where countries can consider strengthening their 2030 targets.

If that happens, says the Potsdam Institute, the current INDCs “can serve as an entry point for the deep low-carbon transformation” needed to achieve two degrees. That will mean swiftly bringing to the fore electric vehicles, advanced biofuels, and carbon capture and storage at surviving fossil fuel power stations.

Anybody who believes that a successful diplomatic outcome in Paris will solve the climate problem has another think coming. The task of making the world safe from dangerous climate change will only have just begun. But if the world emerges from Paris with a deal that includes proper provision for regular reviews of national commitments in the light of advancing science and technology, then it will be a job well done.

Glass half full or half empty? Take your pick.