In the Pentland Firth, a strait that separates the Orkney Islands from Northern Scotland, strong tidal currents have challenged sailors for centuries. But some of that marine energy is now being captured through a project known as MeyGen. This summer, the Atlantis group began construction on a submerged tidal turbine array consisting of four, three-bladed, seabed-mounted turbines, enough to deliver 6 megawatts to the grid by 2016 and power approximately 3,000 Scottish homes. By the early 2020s, Atlantis is planning to build 269 turbines in the firth, capable of generating 398 megawatts of electricity, enough to power roughly 200,000 homes.

On the other side of the world, off the coast of wave-rich Hawaii, Oregon-based Northwest Energy Innovations installed a wave energy conversion device in June that extracts power from the vertical and horizontal motions of waves using high-pressure hydraulics. Located at a test facility built for the U.S. Navy, the 45-ton apparatus, named Azura, bobs in waters off Kaneohe Bay on Oahu. A small, experimental device with a capacity of only 50 kilowatts, Azura is the U.S.’s first and only grid-connected wave energy system. 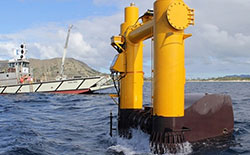 An Azura wave-energy device at a U.S. Navy facility off the coast of Hawaii. NORTHWEST ENERGY INNOVATIONS

These are two of a growing number of advances in marine energy, which has lagged far behind solar and wind power because of the difficulties of operating in harsh ocean environments and the technical challenges of harnessing tidal and wave power. “The technology has kept moving forward, which is good news,” says Ted Brekken, an associate professor of energy systems at Oregon State University. “But the big issue is to get the cost down. Right now, there is the reality of surviving while we get there.”

Ocean waves and tidal movements hold vast amounts of energy. The U.S. National Renewable Energy Laboratory estimates that more than one third of all electricity used in the United States could be drawn from the seas. Still, worldwide, ocean power is forecast to produce only 1 gigawatt of electricity by 2020, a mere fraction of the 370 gigawatts generated by wind at the end of 2014. The $400 million in investments in the marine energy sector were dwarfed last year by the $150 billion in investments in solar power. And important questions remain about the environmental impacts of marine energy technologies.

Despite its halting start, the marine energy industry has increasingly strong advocates around the world. Currently, about 30 tidal and 45 wave energy companies are at an advanced stage of technological development. One recent report said that ocean energy could satisfy 10 to 15 percent of European Union power demand by 2050, enough to serve some 115 million homes.

The promise of marine energy is tied not just to the enormous potential power that lies in shifting tides and the movement of waves, but also its dependability. In most forms it can generate electricity around the clock, eliminating the need for energy-storage systems and making it easier to integrate into the grid than variable solar and wind power. “At some point, all the easy, cheap installations for wind and solar will be done,” says Brekken. “And then it’s ocean energy that’s next in line.”

Another advantage of marine energy devices is that they can be tailored to specific sites and costs. They can serve remote shoreline communities that otherwise depend on expensive diesel or overland transmission lines. That’s already true for the Kvichak watershed in Alaska, where Maine-based Ocean Renewable Power Company deployed a small-scale tidal system in July to reduce the community’s high energy costs.

One thing holding up deployment of marine energy is uncertainty over how devices may affect marine ecosystems.

One thing holding up deployment of marine energy, especially in the U.S., is uncertainty over how tidal- and wave-energy devices may affect marine ecosystems. How do marine animals interact with tidal turbines, which feature rotating blades that could kill them? How does the sound of devices interfere with the ability of marine mammals to navigate, migrate, and communicate? Strangford Lough in Northern Island, where Atlantis operates a tidal turbine, is home to harbor seals, grey seals, and harbor porpoises. Although the turbine at Strangford shuts off when a marine mammal approaches, environmental scientists are nevertheless studying turbine impacts.

“We have to prove beforehand that there is no impact, and we cannot,” explains Dr. Andrea Copping of the Pacific Northwest National Laboratory’s Marine Sciences Laboratory. “We have no concrete proof, just theories based on existing knowledge and computer modeling.” But Copping thinks that regulators are becoming more understanding that some outcomes simply can’t be known, and says, “We are seeing incremental progress in regulatory processes that will support getting devices in the water.”

A key step in the research and development of tidal- and wave-power devices has been the creation of joint public-private “hubs” where researchers from companies, universities, and government can test marine energy devices. In Oregon, the Northwest National Marine Renewable Energy Center — run by the U.S. Department of Energy and institutions like Oregon State University — has been operating an off-grid testing site since 2012. It is currently seeking permission to develop a utility-scale, open-ocean facility with a connection to the utility grid.

Europe now has at least thirteen such hubs, although not all of them currently are testing devices. MeyGen tested its tidal energy device at the European Marine Energy Center (EMEC) in the Orkney Islands, which has 14 berths for experimenting with early phases of both tidal and wave technologies.

The tidal industry sector, which has existed much longer than the wave energy sector, holds the most promise.

In the wave sector, Finland-based Wello Oy has been testing its 500-kilowatt Penquin wave energy converter at EMEC since 2011, but it will soon fill a larger berth at WaveHub — a full-scale wave test site off the coast of Cornwall in the U.K. — for a newer version of its Penguin technology.

The tidal industry sector, which has existed much longer than the wave energy sector, holds the most promise. Traditional tidal technologies relied on artificial barriers across shoreline estuaries that hold and release tidal flows. The water, when released, drives turbines. But these barriers take a toll on the environment; France’s La Rance barrage, opened in 1966, has caused progressive silting of the area’s ecosystem and has contributed to the disappearance of species such as sand eels and plaice. 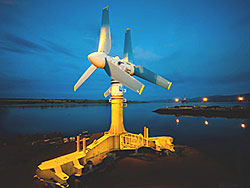 A tidal energy turbine built by Lockheed Martin and installed in the Bay of Fundy off Nova Scotia. ATLANTIS RESOURCES CORPORATION

Experts say the real future of tidal energy lies with arrays of floating or sea-bottom-mounted turbines that capture the energy of tidal currents in unobstructed waters — so-called in-stream technology. The most logical place to develop tidal energy is in Nova Scotia’s Bay of Fundy, where the world’s most extreme tides — rising and falling more than 50 feet — contain more than 50,000 megawatts of theoretical power. About 2500 megawatts can easily be extracted with no discernible environmental impact from one inlet — the Minas Passage — alone, according to Stephen Dempsey, executive director of the Offshore Energy Research Association (OERA), a non-profit group.

In 2014, the Fundy Ocean Research Center for Energy (FORCE), another research hub, installed underwater power cables in the upper portion of the Bay of Fundy that can transmit a total of 64 megawatts, equivalent to the power needs of 20,000 homes at peak tidal flows. A handful of companies are preparing to hook up their turbines to the grid.

“The scale and challenge these devices represent; their physical construction; thousands and thousands of pounds of steel — it takes that type of financial commitment for the industry to get started, and I am seeing it,” Dempsey says. “This is serious business. It is real.”

Blessed with lots of sun and keen to cut its reliance on imported oil, Hawaii has moved to the forefront of residential solar installations in the U.S., Erica Gies writes. But financial and technical hurdles are slowing the state’s drive to generate 40 percent of its electricity from renewable energy by 2030. READ MORE

Although it lags behind tidal, the wave energy sector also has been gaining some momentum. In Hawaiian waters, at 100-feet depths, Azura’s device sits partially submerged in the waves, with yellow-steel arms reaching upward. Azura has already begun construction of a second full-scale device that also will be tested in Hawaii. In Australia, Carnegie Wave Energy has developed its so-called CETO wave technology, which consists of fully submerged buoys that drive pumps linked to electricity-generating pods. After 16 years of development, Carnegie last year successfully tested a grid-connected array consisting of three 240-kilowatt buoys, supplying Australia’s largest naval base with power and desalinated water.

Multinational companies with the wherewithal to take the marine industry to the next level are making significant acquisitions. In 2013, the French energy giant DCNS acquired Open Hydro, which now has nearly one gigawatt of marine energy projects under development worldwide, including two tidal turbines in the Bay of Fundy and two off the coast of Brittany in France.