In recent years, plant ecologist Zacharie N’Zooh has hiked thousands of kilometers conducting biodiversity surveys for the conservation group, WWF, in the northwestern Congo basin of his native Cameroon. His work has given him a unique understanding of the region’s rich bioversity and its people. It also has made him a key player in safeguarding the area from illegal poaching and gold mining.

In 2011, when poachers killed one of the eco-guards working with N’Zooh, the ecologist played an important role in persuading the Cameroon army to deploy elite troops into the Sangha Tri-National Conservation Complex. The troops confiscated weapons while Cameroon law-enforcement officials jailed some of the major figures involved in the country’s illegal bushmeat trade. 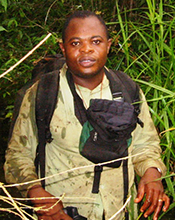 N’ Zooh is a prime example of an increasingly important phenomenon: the scientist not only as researcher, but also as a valuable player in safeguarding increasingly threatened protected areas that harbor rich fauna and flora. As human populations soar and demand for natural resources rises, many protected areas are being assailed by illegal poachers, miners, loggers, and farmers. But these reserves are also key locations for scientific research.

While evidence is mostly anecdotal, many field researchers are increasingly becoming determined defenders of protected areas. “It is high time that this came to be a standard obligation for scientists,” says prominent conservation biologist Thomas Lovejoy of George Mason University. It is noteworthy that many funding agencies see conservation engagement by researchers as a part of a scientist’s role. For example, the U.S. National Science Foundation is now emphasizing broader criteria such as public outreach and societal benefits when evaluating research proposals, and philanthropic foundations often place great weight on conservation activities when awarding grants and prizes to scientists.

Of course, some scientists have long attempted to protect the habitats and creatures that are the focus of their work. No one who has read Gorillas in the Mist could forget Dian Fossey’s fierce determination to defend the mountain gorillas she studied — an effort that ultimately cost Fossey her life.

In recent years, clear evidence of “safeguarding” by scientists has been been on display at places like Tai National Park, in Cote d’Ivoire, Africa, where studies have shown that active research sites have much higher wildlife abundances and far less evidence of poaching than do areas with little research activity. Suppression of poaching and illegal logging also have been an unexpected benefit in other active research sites in the tropics, including areas frequented by scientists and birdwatchers in the Nouable-Ndoki Reserve in Congo, Kibale National Park in Uganda, Gunung Palung National Park in Borneo, and Soberania National Park in Panama.

Studies have shown research sites have much higher wildlife abundances than other areas.

Some scientists are audacious. In Indonesian Borneo, researchers backed by the central government encouraged park staff to spike trees and confront renegade timber-cutters to deter rampant illegal logging. In Brazilian Amazonia, field researchers have helped the indigenous Kayapo resist miners and loggers, even paying for air patrols to spot invaders on indigenous lands. Once, Enrico Bernard — a Brazilian Ph.D. student working in a central-Amazonian reserve where I have long done research — was on a remote dirt road when he encountered a truck packed with rifle-toting poachers. When the poachers advanced, Bernard planted himself squarely in front of their truck and bellowed, “You will not pass!” The poachers turned tail and headed for home. 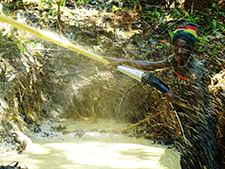 An illegal gold miner working in a protected area of Suriname. WILLIAM LAURANCE

Some benefits of science safeguarding are less direct. In Papua New Guinea, researchers are helping indigenous groups in remote areas to evaluate offers from logging and mining companies that hope to exploit their traditional lands. Some scientists build local support for protected areas with education programs in nearby communities and by hiring locals as field assistants and taxonomists. In Gabon, the field assistants my colleagues and I have employed are all avid former hunters, and several have become keenly interested in wildlife conservation. In Ranomafana National Park in Madagascar, researchers and ecotourists are the biggest source of income for impoverished nearby villages, providing $2 million in annual income and boosting local support for driving out poachers and illegal loggers.

More broadly, scientists have played a key role in establishing national parks and reserves in the tropics worldwide. In Madagascar, ecologist Patricia Wright of the State University of New York at Stony Brook has established and is running one of the country’s best national parks. Daniel Janzen has helped create and run an important protected area in Costa Rica. In Peru, journalists who visited Manu National Park at the behest of scientists have made the park famous for ecotourists. Today, lands around the park are overrun with illegal loggers and gold miners, but such encroachers “wouldn’t dare show their face” at Manu, according to tropical ecologist John Terborgh at Duke University, who has worked in the park.

Despite notable successes, not all attempts at science-safeguarding are successful. In the Ecuadorian Amazon, illegal gold miners threatened to burn down a research station when scientists tried to stop them from mining and clearing the forest. Many park guards have been killed or threatened trying to combat illegal poaching, logging, and mining. Scientists and park guards have been largely unable to stop the epic slaughter of elephants and rhinos in Africa — the result of an almost insatiable demand for ivory and rhino horn in Asia.

Scientists and park guards have been unable to stop the slaughter of elephants and rhinos in Africa.

On occasion, researchers affect wildlife and protected areas negatively. For instance, mark and recapture and radiotelemetry studies can be stressful to animals, with a few dying as a result. Biological collecting is another concern, particularly for rare or locally endemic species and those that have small, isolated populations in parks. On occasion, researchers who handle wildlife can accidentally transmit infectious diseases to them, with primates, bats, and frogs known to have been affected in the past.

Perhaps the biggest potential downside of research is that sensitive fauna — including elephants, rhinos, deer, and some carnivores — tend to avoid areas frequented by humans. Because of such potential problems, I hypothesize that researchers and ecotourists in protected areas must achieve a balance — enough of a presence to deter illegal activity, but not so much as to inordinately disturb wildlife.

With activists killed in Brazil, Cambodia, the Philippines, and elsewhere, journalist Fred Pearce writes, 2012 may have been the worst year yet for violence against those working to protect the environment. So far, little has been done to halt this chilling development. READ MORE

While it’s clear many scientists are promoting and defending protected areas, hard data on this are sparse. Does science-safeguarding of parks occur commonly, or is it only patchy and occasional? Could research be optimized in space and time to maximize its benefits for protection and conservation? Should researchers be encouraged to work in parks that are highly imperiled, even if this might entail more personal risk?

What is not in doubt is that many parks need more protection. Thomas Struhsaker, a primate ecologist at Duke University, found that poaching was a serious problem in each of the 16 protected areas he surveyed across Africa, based on information from long-term researchers in the parks.

Despite various uncertainties, there seems little doubt that field researchers are playing a role in deterring destructive activities in many protected areas. This conclusion needs to be conveyed to conservation funders and decision-makers. Maintaining a long-term research presence could be a key strategy for safeguarding parks and their imperiled biodiversity. With research budgets tightening in many countries, we must carefully weigh the impacts of reducing research in our embattled protected areas.