The Solarium, a new 8-story apartment building in New York City, is part of a new wave of green buildings in Gotham. Its exterior is made from 100 percent recycled material. The burnished floors are sustainably farmed bamboo. The apartments lack bathtubs in order to save water. Perhaps the most novel green accoutrement of the Solarium, however, is a small, black windmill perched on a short pole rising from the rooftop. Made by WindTronics, the windmill went live in April — it is one of the early beta units from the Michigan startup.

The company claims a single windmill can supply as much as 30 percent of a household’s annual power needs if winds average roughly 10 miles per hour. That is a brisk steady breeze but even homes averaging lesser amounts (5-9 mph winds) can receive significant electrical outputs of 15 to 30 percent of annual power needs. The Solarium’s wind turbine will power light fixtures in common areas and a rooftop theater for residents. “It has no noise and no vibration,” says Cyrus Claffey, the CEO of Clareo Networks, a real estate technology and design company that researched and planned the project for the Solarium’s developers. “It is bird friendly. And it has a great design. Power kicks in at a much lower windspeed than comparable products.” 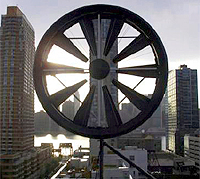 WindTronics
The gearless WindTronics system generates energy at the blades’ tips and can be installed on a rooftop.

This WindTronics windmill represents a new wave of technology innovation sweeping through the small wind industry. This innovation combined with national, regional and local incentives, as well as significant cost reductions in installations and products, is driving fast growth for small windmill makers. In 2009, despite an abysmal economy, the U.S. small wind market (turbines with rated capacities of 100 kilowatts or fewer) grew by 15 percent, according to the American Wind Energy Association (AWEA). That growth included an increase of 20.3 megawatts of new capacity and $82.4 million in sales.

The 2009 tally pushed the total installed capacity of small wind turbines in the United States to 100.2 megawatts. (That’s only equivalent to one-fifth the output of an average coal-fired power plant in the United States. But more than half of that capacity came online in only the last three years, making small wind one of the fastest-growing renewable energy resources around.) This adoption is being driven by government incentives, improved zoning procedures, consumers’ growing affinity for residential clean energy, and emerging financing mechanisms. The 2009 American Recovery and Reinvestment Act expanded available federal investment tax credits for small windmills to 30 percent of the total cost of a wind system, an enormous boost that puts small wind on equal footing with the fast-growing residential solar industry.

“You can add the federal credit on top of state level rebates that can be 20 percent to 25 percent and that pushes the effective price of installing a small residential wind system down to $15,000 on average,” says Ron Stimmel, the legislative affairs manager for AWEA. With such a system, he notes, consumers are effectively pre-paying their electricity bills for decades. According to Stimmel, most windmills have a lifespan of 20 to 30 years.

To date, most of the growth in small wind in the U.S. has come in rural or semi-rural areas.

To date, most of the growth in small wind in the United States has come in rural and semi-rural areas. This has been due to the requirement for many types of small windmills to sit atop poles that rise at least 40 feet above terra firma. Rural areas have long been more permissive of these types of installations. Looser zoning codes in those areas have allowed farmers to put up windmills without having to go through permitting hoops — or angering neighbors who might have to look at the spinning systems. Even in these types of rural regions, however, penetration remains below 5 percent and room for growth is enormous.

Some rural states have embraced wind at a policy level. Vermont, for example, became the first state to implement a feed-in tariff (FIT) for small wind systems. This tariff guarantees that small wind farmers can resell excess power back to the big utilities at above market rates.

According to AWEA, roughly half of all small wind power additions in 2009 were in the U.S., and the country has more than three times as many small wind manufacturing companies as the next closest competitor, Japan. While the U.S. may lead in small wind innovation, the rest of the world is looking to catch up. Japan, Canada, the United Kingdom, China, Germany and Holland all have significant numbers of small wind technology companies.

At present, the United Kingdom and Canada have the most well-developed small wind markets outside of the United States. But 33 countries have put in place FITs for small wind power generated by homeowners and small busineses who wish to sell their power back into the grid. Such tariffs are designed to promote the installation of smaller scale renewable power projects. These countries include most of the developed world and emerging giants such as China and India, but also a number of developing economies including the Philippines and Kenya. International policy and finance bodies are pushing hard to bring small wind systems to isolated rural communities, particularly as a complement to solar installations. The World Bank has undertaken an aggressive program to push small wind to developing nations in South America, Asia and Africa as part of its Renewable Energy in the Rural Market initiative.

Thirty-three countries have put in place feed-in tariffs for small wind power from homeowners and businesses.

Many existing small wind companies have global dealer networks, and renewable energy project finance is now finally catching up, allowing dealers both in the U.S. and abroad to offer buyers financing options to defray costs or maximize tax benefits. “The primary step is going to be distributor financing,” says J.J. Carrasco, a principal at Atoll Financial, which signed a deal in 2009 to underwrite purchases of small wind turbines sold by Helix Wind. While Atoll plans to launch its projects in the U.S., “We are also interested in bringing U.S. energy applications in developing markets such as China and Brazil,” says Carrasco. Other investors and financiers, like Carrasco, have taken a keen interest in small wind. Over the past five years, venture and private equity investors have poured $252 million into U.S. small wind companies, hoping to reap substantial rewards as the market lights up and more homes, commercial buildings and farms turn to spinning blades to lighten their electric bills.

In the U.S., Stimmel and other industry experts believe farmers and others in out-of-the-way tracts will continue to put up tall poles and windmills at increasing rates, effectively hedging themselves against often volatile electricity prices. But smaller windmills are moving closer to the city centers in less dense metropolitan areas and are popping up like mushrooms in exurbs on smaller plots of land of less than an acre.

Take the case of Nancy Tabor. The co-owner of McClane Electric, a small alternative energy contracting firm located near Las Vegas, Nev., Tabor signed up as a dealer for Arizona-based Southwest Windpower in January, 2009, after the new federal tax credit for small wind became law. In the wake of the credits, Southwest Windpower secured a financing vehicle for its dealers, allowing homeowners to more easily borrow money to pay for wind turbine installations.

A Hawaii company seeks to produce wind power by capturing flutter and vibration in a stretched membrane.

Several years earlier, the city of Las Vegas had passed new permitting procedures that made it much simpler for homeowners in some areas to receive approval for wind turbines on plots of land as small as a half-acre. Tabor has installed several units and says many more customers are eager to put up a windmill, pending the requisite collection of wind data for their proposed sites. “Out here, you have really good winds in many places, particularly with a little bit of elevation. It’s an excellent place for these types of projects,” says Tabor.

The arrival of more advanced systems, like the WindTronics device, could herald deeper penetration into urban areas previously considered unusable due to the chaotic nature of the breezes and the long periods of relative low winds. The WindTronics system, which resembles a fancy racing bike wheel, is vibration- and noise-free. Birds readily recognize the windmill, and it can be installed on a rooftop, eliminating the need for tall, unsightly poles. More importantly, according to WindTronics, it begins to generate power at wind speeds as low as two miles per hour, five miles per hour less than more traditional windmill designs, and it can continue to generate power at wind speeds as high as 42 miles per hour, nearly 15 miles per hour higher than standard shut-off speeds for most wind turbines.

WindTronics is hardly alone in trying to reinvent the small wind turbine. Hundreds of startups and incumbents right now are vying for traction in the nascent market. The vast majority of these small wind players are located in the U.S., making the country the capital of small wind innovation. Systems either proposed or in production range from very standard four- and three-blade systems, to bicycle-wheel designs like that of WindTronics, to vertical-axis windmills that catch wind power in spiraling motions. A novel wind-power startup based in Hawaii, Humdinger Wind Energy, seeks to produce wind power by capturing flutter and vibration in a stretched membrane, a method akin to capturing the energy produced by the snapping of a flag in the breeze.

This upswelling of innovation bodes well for the future of small wind and could help bring a wind-driven glow to many more homes and buildings in the not so distant future.