Sharks are our seniors by about 450 million years. Yet in the last half century we’ve depleted some populations by 90 percent.

Of the world’s 1,200 or so known shark and ray species (rays can be thought of as sharks whose pectoral fins have transformed to wings), 17 percent are deemed threatened with extinction by the International Union for Conservation of Nature. But the percentage is doubtless higher because data on almost half the 1,200 are lacking. Species like angel and daggernose sharks are listed as “critically endangered.” The pondicherry shark may already be extinct. 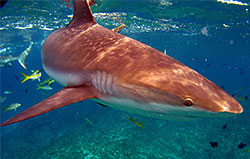 A Caribbean reef shark swims in Atlantic waters near Bimini, in the Bahamas. DEAN GRUBBS

Sharks can’t bounce back like other fish. Most give birth to dog-size litters, and those that lay eggs don’t spew big numbers. Sandbar sharks mature at age 16, then bear eight to 12 pups every other year at most. Embryos of the sand tiger swim around in each of two uteri, attacking and consuming siblings until only two survive. Duskies don’t mature until age 20, then deliver three to 16 pups every third year.

The shark crisis began with the economic boom in China and other East Asian nations. Before that most Asians couldn’t afford shark fin soup.

The slaughter has been staggering. Many countries in Africa, Asia, and the Middle East aren’t involved in global management treaties and, even if they were, lack resources to keep track of what shark species get killed in what quantity. Some countries with those resources are “playing games, cooking the books, and fishing illegally,” to borrow the words of shark biologist Greg Skomal of the Massachusetts Division of Marine Fisheries.

Shark depletion is dangerous in ways we can only begin to understand. It’s not just about sharks. Florida State University shark scientist Dean Grubbs notes that marine food webs are so complex that it’s hard to document “trophic cascades,” which occur when predator removal causes ecosystem parts to collapse like dominoes.

In one survey in China, 85 percent of respondents reported they had stopped eating shark fin soup.

But trophic cascades are surely happening. Among the better documented examples is the proliferation of midlevel predators following shark reduction. These predators then deplete algae-eating parrotfish, and algae then smothers the reef. And where tiger sharks have been depleted, dugongs and green sea turtles are foraging on wider, richer sea-grass beds, possibly damaging them and communities they sustain.

In the 1980s and 90s some of the grossest and most wasteful shark carnage was happening in the United States, which, having depleted species like cod, haddock, flounders, tunas, and swordfish, promoted exploitation of sharks as an “under-utilized resource.” Adding to the slaughter was a 1980 trade agreement with China and an obsession with sharks among anglers spawned by the 1975 movie “Jaws.”

With the growing demand in Asia, fishing boats from other poorly regulated nations and illegal fishermen plundered shark populations in all oceans, especially the Mediterranean and Indo-Pacific.

Recently, however, there’s been some good news about sharks. Peter Knights, director of WildAid — an international group committed to ending hurtful and illegal trafficking in wildlife — has gone so far as to proclaim that “the tide may at last be turning.”

Global fin trade is declining. During the last two years China, Hong Kong and Malaysia have banned shark fin soup at government functions. Five hotel chains have promised not to serve shark fin soup, and 26 airlines have agreed not to transport fins. WildAid reports that at least 76,000 people in Malaysia and 70,000 people in Hong Kong have signed its “I’m FINished with Fins” pledge.

In Beijing, Shanghai, Guangzhou, and Chengdu, 85 percent of people who responded to a WildAid survey reported that they’d stopped eating shark fin soup. Demand has fallen so dramatically that, according to fin traders in Guangzhou, “shark fin is the same price as squid now.”

The U.S., the European Union, and India have banned finning, which is now illegal in about 100 countries.

Trinidad-Tobago and New Zealand, huge shark fin exporters, banned finning in August and October respectively. United Arab Emirates imposed a ban in September. Australia, India, the U.S., the Dominican Republic, all of Central America, and the European Union have banned it, too. Now finning is illegal in about 100 countries. Some of these define the practice as slicing off fins and dumping sharks at sea, sometimes when they’re still alive. India, South Africa, Mexico, Canada, Argentina, the EU, and the U.S., for example, permit removal of fins only if carcasses are first brought to shore. That creates difficulties in handling and storage, making fin sale far less profitable.

In September the 180-nation Convention on International Trade in Endangered Species of Wild Fauna and Flora protected the porbeagle shark, oceanic whitetip, great, smooth, and scalloped hammerheads, and all manta ray species by forbidding trade without certification that the take was legal and sustainable.

In November the 120 member nations of the Convention on the Conservation of Migratory Species of Wild Animals extended “Appendix II protection” (a pledge to devise management strategies) to silky sharks, two species of hammerheads, and all three species of threshers. Granted the same or stronger protections were all 9 species of mobula rays and all species of sawfish. Shark Advocates International president, Sonja Fordham — a fierce shark defender and not one to gush over international shark and ray initiatives — announced that she was “elated by the overwhelming commitment.” 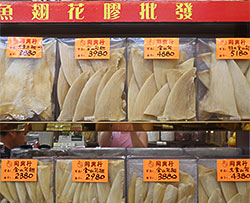 Concurrent with improvements in global shark management have been improvements in public attitudes. In 1980 I covered a shark tournament at Bay Shore, New York. A cement pier awash with bile, blood, and stomach contents was littered with about 200 dead sandbars, makos, great whites, duskies, blues, and other shark species so hacked up I couldn’t identify them. When the crowd bulged through the ropes to break off teeth, the announcer had to yell: “Get back, get back. Are your deaf?” After prizes were distributed carcasses were swung into garbage trucks.

Sharks still get killed at tournaments, but because of draconian bag limits imposed by the more conservation-minded nations most are released. Now competition is usually by biggest fish rather than aggregate weight. And an international “Shark Friendly” initiative, sponsored by the Humane Society of the United States, the Pegasus Foundation, and the Guy Harvey Ocean Foundation, is reducing shark mortality by eliciting pledges from marinas to forbid or discourage the offloading of dead sharks. At this writing 205 marinas and 103 other businesses around the globe have signed up.

In the U.S., the National Marine Fisheries Service (NMFS), charged with managing marine organisms, has come a long way in tightening protections for sharks.

In March of 1996, I attended a shark meeting in Philadelphia held by the Mid-Atlantic Fisheries Management, one of eight regional bodies charged with advising NMFS. Addressing the assemblage was one of the world’s preeminent shark biologists — John Musick of the Virginia Institute of Marine Science. He declared that in its shark plan NMFS had assumed a recovery rate three times higher “than biologically possible” and that “it’s very frustrating for those of us in the scientific community who work with these animals to keep coming to these meetings, keep presenting the data, and have the NMFS blow us off.”

A longtime critic says U.S. shark management is now ‘among the best in the world.’

But this month I asked Musick how the NMFS is doing today compared to when he’d pummeled it 19 years ago. He described the change in direction as basically 180 degrees, opining that U.S. shark management is now “among the best in the world.”

The good news has encouraged and inspired, but it seems also to have created some Pollyannaism. Marine scientist Demian Chapman of New York State’s Stony Brook University says the decline in fin traffic is real but that it’s exaggerated by the media. “Rerouting from Hong Kong to Vietnam might account for some of it,” he submits. And, while a study published in the April 2015 issue of Biological Conservation demonstrated that global fin trade has dropped by about 25 percent over the last decade, co-author and shark expert Shelley Clarke warns that the demand for shark meat is increasing.

Even as coastal sharks recover in some waters they’re getting hammered when they migrate to countries that don’t manage them. It’s worse for pelagic species killed on the high seas.

Finally, the U.S. and other nations need a ban on fin trade, not just on what they call “finning.” And even the best shark management could be improved. For example, duskies have been protected by a U.S. fishing ban since 1999; but they’re dying on longlines set for tuna and swordfish. The species would recover faster along the coasts of North, Central and South America if U.S. recreational and commercial fishermen hadn’t shouted down a 2013 NMFS proposal for longline-free sanctuaries as well as an eight-foot minimum-size limit on all sharks.

Recovery of sharks that move between scores of nations in the Western Hemisphere could end quickly if a frenetic effort to weaken America’s Magnuson-Stevens Fishery Conservation and Management Act succeeds. In 2006 the U.S. Congress inserted desperately needed teeth into this law.

In many countries, sharks are worth more alive than dead because of tourism.

Now it’s basically illegal for NMFS to allow overfishing, which had been pretty much the norm for species it managed. The strengthened law requires the agency to establish annual catch limits based on biological assessments from independent scientists selected by the eight regional councils instead of advice from just the councils themselves. Traditionally the councils were dominated by special interests who profit from fishing and who are forever claiming that scientific fish surveys grossly underestimate populations.

The act is again up for reauthorization, and those same special interests are pushing to insert “flexibility,” a euphemism for emasculation. Leading the charge against a strong Magnuson is the Recreational Fishing Alliance (RFA), an industry-financed organization that describes the law as the dirty work of “anti-fishing environmental groups” who serve “Kool-Aid” to gullible anglers. In 2014 Congress tried to re-legalize overfishing with a failed RFA-backed bill called the “Strengthening Fishing Communities and Increasing Flexibility in Fisheries Management Act.”

Is any shark fishery — even or especially the ones first-world nations allow — a good idea? No, according to Ken Hinman, president of the Virginia-based marine advocacy outfit Wild Oceans. “Ours don’t produce much,” he says. “They cost a bundle to manage… They lose money. Any kind of concerted effort can’t be sustained anyway.”

After years of fitful starts, the Pacific island nation of Kiribati this month banned all commercial fishing inside its huge marine reserve. New satellite transponder technology is now helping ensure that the ban succeeds in keeping out the big fishing fleets.
READ MORE

What’s more, in many countries sharks are worth more alive than dead. Using 2002 visitor surveys, biologist Rachel Graham of Mar Alliance — a Belize-based grassroots NGO that assesses shark and ray populations, fisheries, and related tourism — estimated the value of whale-shark viewing during the six-week season at $3.7 million. And an Australian study found that over its lifetime a single reef shark can contribute 1.9 million eco-tourism dollars to the economy of Palau.

Still, humans are killing these ancient fish faster than they reproduce. Research by Canada’s Dalhousie University indicates that 100 million sharks are slaughtered every year. If the tide is indeed “turning,” it needs to turn faster.