As a result of the recent El Nino, the Amazon rainforest is the driest it has been at the start of a dry season since 2002 — setting “the stage for extreme fire risk in 2016” in the region, 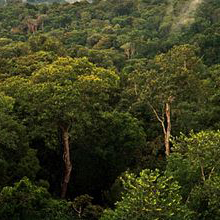 The Amazon rainforest.
NASA warned in a new fire forecast for South America. The risk for wildfire this year now exceeds the risk in 2005 and 2010, years when wildfires burned large swaths of the forest, the scientists found. Terrestrial water storage, or soil moisture, is also lower than previous years, NASA said. “When trees have less moisture to draw upon at the beginning of the dry season, they become more vulnerable to fire and evaporate less water into the atmosphere,” said UC-Irvine scientist Jim Randerson, who helped create the forecast. “This puts millions of trees under stress and lowers humidity across the region, allowing fires to grow bigger than they normally would.”