Browning of Congo Rainforest Is Depicted in NASA Satellite Data

Persistent drought has taken a major toll on Africa’s Congo rainforest, with large-scale browning intensifying and affecting a growing portion of the forest over the past decade, an analysis of NASA satellite data shows. A 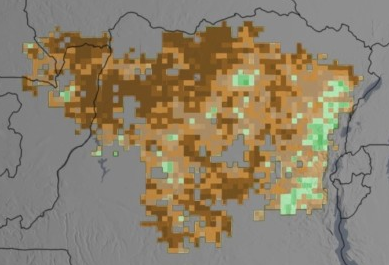 Browning of Congo rainforest
browning trend significantly dwarfed smaller areas of “greening” — a satellite-derived indicator of forest health — during April, May, and June each year from 2000 to 2012, according to research published in Nature. The browning of Congo’s rainforest is significant, researchers said, because most climate models forecast that tropical forests may face increasing stress and rainfall shortages in a warmer and drier 21st century. A continued drying trend might alter the composition and structure of the Congo rainforest, affecting its biodiversity and carbon storage, according to the study. “Recent climate anomalies as a result of climate change and warming of the Atlantic Ocean have created severe droughts in the tropics, causing major impacts on forests,” a NASA researcher said.