Engineering students have created a roof tile coating that, when applied to an average-sized residential roof, 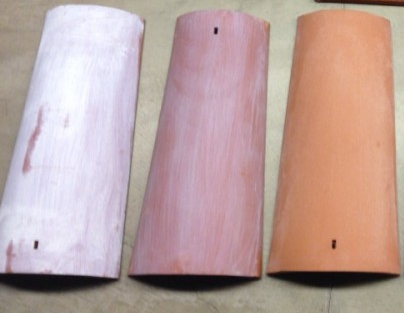 Coated tiles (left) and an uncoated tile (right).
breaks down the same amount of smog-causing nitrogen oxides per year as a car driven 11,000 miles makes. If applied to one million roofs, the titanium-dioxide based coating, which costs roughly $5 per roof, could clear 21 tons of nitrogen oxides each day, the team calculated. That could put a noticeable dent in atmospheric levels of the pollutant; in Southern California, for example, an average of 500 tons of nitrogen oxides are emitted daily. The team, which was recently recognized in a U.S. Environmental Protection Agency student design contest, showed that their tiles could remove 88 to 97 percent of nitrogen oxides in laboratory tests — a feat that other roof tile prototypes have not demonstrated.