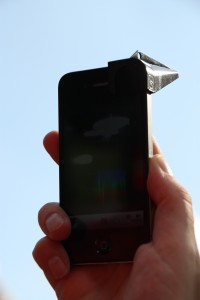 Smartphone with the iSpex accessory
continent. In the iSpex-EU project, volunteers will use a free accessory attached to their smartphones to capture the spectrum of sunlight reaching their phones. Using those readings, scientists can determine levels of fine particles and aerosols in the atmosphere. Once enough data has been collected, the researchers plan to create maps showing where ground-level air pollution poses the highest risks. A recent study from King’s College in London estimated that, in London alone, roughly 9,500 premature deaths each year are linked to high levels of air pollution. After smoking, air pollution is the second-largest public health challenge in the region, researchers say.