Mercury Pollution in Oceans Has Tripled Since Industrial Revolution

Globally, oceans contain roughly 60,000 to 80,000 tons of mercury pollution, according to a report published this week in Nature detailing the first direct calculation 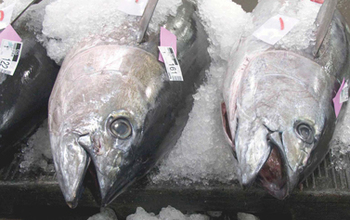 Ahi tuna has very high mercury concentrations.
of mercury pollution in the world’s oceans. Ocean waters shallower than about 300 feet (100 meters) have tripled in mercury concentration since the Industrial Revolution, the study found, and mercury in the oceans as a whole has increased roughly 10 percent over pre-industrial times. North Atlantic waters showed the most obvious signs of mercury pollution, since surface waters there sink to form deeper water flows. In contrast, the tropical and Northeast Pacific were relatively unaffected. “We don’t know what that means for fish and marine mammals, but likely that some fish contain at least three times more mercury than 150 years ago,” and possibly more, the lead researcher said. “The next 50 years could very well add the same amount we’ve seen in the past 150.”