Rerouting the flight paths of commercial aircraft to minimize the condensation trails, or contrails, they leave behind would help slow global warming, even if 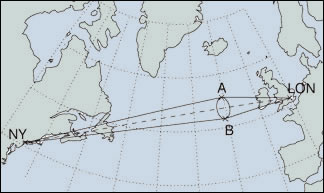 Alternate flight paths to avoid contrail formation
the new flight path is longer, according to research published today. Contrails, thin clouds composed of ice crystals condensed from an aircraft’s exhaust, can persist for 17 hours or more and are likely the single largest contributor to climate change associated with aviation. They form when a plane passes through parts of the atmosphere that are very cold and moist, usually near high pressure systems. The new research shows that avoiding contrail formation has greater climate benefits than avoiding additional carbon dioxide emissions associated with slightly longer flight routes. For example, for a small aircraft that is predicted to form a contrail 20 miles long, an alternative path that adds less than 200 miles will have a smaller climate impact than the contrail. For a larger aircraft, which emits more CO2 per mile than a smaller plane, the alternative route is preferable if it adds less than 60 miles, according to researchers from the University of Reading.