The world has lost one-tenth of its wilderness — an area twice the size of Alaska — over the last 20 years, scientists reported this week in the journal Current Biology. 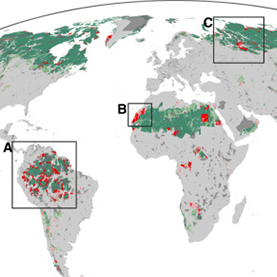 Wilderness loss since the early 1990s.
The hardest hit areas have been the Amazon and Central Africa, which have been plagued by rampant and unregulated logging and other industrial activities in recent decades. The scientists found there are 11.6 million square miles of wilderness remaining on earth, largely located in North America, North Asia, North Africa, and Australia. “The amount of wilderness loss in just two decades is staggering and very saddening,” said lead author of the study James Watson, a biologist at the University of Queensland and the Wildlife Conservation Society. “You cannot restore wilderness. Once it is gone, the ecological process that underpin these ecosystems are gone, and it never comes back to the state it was. The only option is to proactively protect what is left.”