Off the coast of the Pacific Northwest lies a phenomenon as unique and precious as the Great Barrier Reef, hidden deep below the waves: a fragile reef of sponges literally made of glass. The Canadian government is now taking some steps to protect this oddity from accidental destruction. But researchers and conservationists alike say the action isn’t enough, and they are fighting for greater protection.

“The draft regulations present an unacceptable risk,” says Sabine Jessen, National Director of the Oceans Program for the Canadian Parks and Wilderness Society in Vancouver. She notes that the draft regulations include an “adapted management” zone of 200 meters where mid-water trawling by fishing vessels will still be allowed. “Well, we know they sometimes hit bottom,” she says. 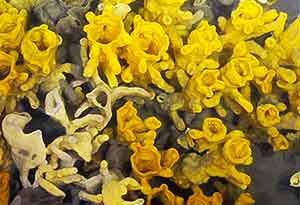 Fragile glass sponges on the Fraser Ridge reef off the coast of Vancouver, British Columbia. S. LEYS, UNIVERSITY OF ALBERTA

Sponges are gelatinous animals made up of a layer of slime coating an often-cup-shaped skeleton. For glass sponges, that skeleton is made of tiny spires of delicate silicon dioxide. “They’re like a really high-quality wine glass — if you touched [it against] the corner of the counter you’d be afraid to chip it, but you can still hold it by the base — it doesn’t crumble in your hands,” says Sally Leys, a biologist at the University of Alberta who has extensively studied glass sponges. The primitive animals pump vast amounts of seawater through their cups each day to filter out bacteria as food, cleaning the water in the process.

It was long thought that reefs of the sponges had gone extinct 40 million years ago.

While glass sponges themselves aren’t that rare — they live in every ocean of the world, and have been around since the early Cambrian at least — it was long thought that reefs of the creatures had gone extinct 40 million years ago. Then in 1987, a mapper with the Canadian Geological Survey stumbled on a reef in British Columbia’s Hecate Strait. Manfred Krautter, an expert on fossilized glass sponge reefs at the University of Stuttgart, heard about it in 1997. “At first I didn’t believe it,” he says. “It was like finding living dinosaurs running around.”

The difference between isolated sponges and reefs is huge, according to Leys — comparable to the difference between a single tree and an old-growth forest. “These reefs are just gorgeous,” she says. “ Because of its size, it becomes habitat for a whole group of different creatures.”

In 2001, more pockets of reef were mapped off British Columbia in the Georgia Strait after researchers were tipped off by glassy shards washing ashore on Galiano Island. And in 2007, University of Washington geologist Paul Johnson discovered a U.S. equivalent when he went looking in spots where fishermen had dredged up glass. More than a dozen patches of reef have now been found along the Pacific Northwest coast between Washington State and the Haida Gwaii archipelago in British Columbia — but nowhere else in the world. The largest is that first find in Hecate Strait, where glass sponge reefs have been growing for more than 9,000 years and stand up to 25 meters high, covering an area the size of Manhattan, some 200 meters below the waves. Smaller patches of reef have been found in the mouth of the Fraser River and Howe Sound, within a stone’s throw of Vancouver, lurking under passenger ferry routes and surrounded by housing.

‘These reefs stand no chance against anything that touches the bottom,’ says one scientist.

But while the reefs are seemingly resilient to some nearby development, a moment’s work by a ground-trawling fishing net can destroy hundreds of years’ worth of growth . The sponges can build at 3 to 7centimeters per year, says Leys, but meanwhile the bottom gets buried in sediment and the whole structure compacts, slowing down the overall growth. Sonar scans from the early 2000s showed “abundant” trawl marks, and submersible dives have spotted stumps and ridges where whole sections of sponge were plowed off by fishing gear.

“These reefs stand no chance against anything that touches the bottom,” Krautter told an audience at a recent conference. “It’s frustrating.”

Some action has been taken to preserve them. In 2002, a groundfish trawl closure was put on the Hecate Strait reefs. And the Canadian Parks and Wildlife Society started campaigning for an official Marine Protected Area (MPA) around the reefs in 2010. That is now coming to fruition.

This summer, the Canadian government enacted a fishing closure around nine glass sponge reef spots in and near the Strait of Georgia and drafted regulations for a MPA around the Hecate Strait sponges. “We see that as an interim step,” says Jessen. In the Strait of Georgia, she notes, “We got a 150-meter buffer zone with no fishing. In some ways that’s almost better than what’s being proposed in the MPA right now.” 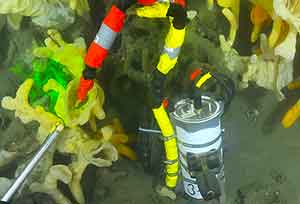 Scientists use a flow and oxygen probe to measure how rapidly the glass sponges filter water for nutrients. S. LEYS, UNIVERSITY OF ALBERTA

While the proposed protected area puts a firmer stamp on the bottom-trawling ban, and prevents some other activities, including prawn trapping, it wouldn’t necessarily save the sponges from all harm — particularly from sediment kicked up by other activities nearby that can clog up sponge filters and stop them from feeding. Crab trapping for example, which has boomed since 2010, occurs next to the proposed MPA.

“Plans to allow fishing immediately adjacent to and above them [the sponges] shows the narrow purpose of the proposed MPA,” complains the David Suzuki foundation in a statement. (The Canadian government department in charge of MPAs, the Department of Fisheries and Oceans, did not respond to a request for an interview.) As for the reefs south of the border, “There are no conservation efforts around the reef per se, which is too bad,” says Johnson.

Part of the problem is that so little is known about these glass sponges. It’s impossible to dive to the depth of the reefs, so researchers rely on sonar mapping to get a sense of where they are, and need expensive ship time and support crews to explore them with a dexterous, remotely operated robot. “You need something with control that you’re not going to ram into the sponges,” says Leys.

As for why the reefs live only where they do, scientists think it’s just the luck of many overlapping factors. The sponges need enough silica in the water to grow; it’s about 20 times higher off the coast of British Columbia than the ocean average, thanks to feldspar granites weathering down rivers. They need fjords to shelter in, hard rock to anchor to, and upwelling water to bring them food. And they need the water to be cold enough to allow for their odd electrical cell-signalling system to work — they use calcium channels to convey messages about when to start and stop eating, so they can pump water to suck up bacteria when times are good, but stop the pumping when sediment rates are high to avoid getting clogged.

Climate change might cause a problem if the waters get too warm for the sponges.

Leys’ research so far suggests there is an ideal flow rate of water that lets the sponges get a “free lunch,” expending less energy on pumping but still getting a mouthful of bacteria. That means damaged reefs might not recover if they drop below the ideal flow-rate zone.

Climate change, too, might cause a problem, adds Leys, if the waters get too warm for the sponges’ cell signaling process. “I can’t believe how warm it is in the Hecate Strait,” says Leys, who just returned from a field trip there this month. “The waters have gone up a degree (Celsius) in the last 3 years.” As the waters warm, a patch of anoxic water is expected to be pushed upwards, which might also cause a problem for the reefs. That needs to be tested, says Leys.

Leys’ trip was intended to gather baseline data on the reefs to help with future conservation and monitoring efforts. But it was fraught with challenges. Her team of nine scientists and eight support staff for the remotely operated vehicle joined the Canadian Coast Guard research ship J.P. Tully at the beginning of the month. But what was intended to be a ten-day trip to one of the more pristine areas of reef in the Hecate Strait was compressed into just 36 hours of good weather, says Leys.

“It was nuts,” she says. “There was a brief calm before a massive storm that arrived early on October 7; we fled.” They did manage to use a remotely operated vehicle to place pairs of oxygen sensors and flow meters, which Leys makes herself, inside some sponge cups, to measure how much they are eating and how much energy they expend to do it The bad weather made them rush to retrieve equipment, she says, which led to about $10,000 worth of damage to instruments.

With the world’s coral reefs increasingly threatened by warmer and more acidic seas, scientists are selectively breeding corals to create species with the best chance to survive in the coming century and beyond. Are genetically modified corals next?READ MORE

Such data-gathering expeditions are just the beginning, says Leys. She says more work needs to be done working out a protocol of what needs to be measured, over what area, and with what time intervals, in order to determine whether harm is being prevented or done to the reefs. Sadly, an existing wired array of undersea scientific instruments, which deliver continuous power and data to and from the seafloor off the coast of British Columbia, goes close — but not close enough — to the Georgia Strait reefs to keep tabs on them.

In the meantime, Leys and the Canadian Parks and Wildlife Society would like to see a more precautionary approach taken with the reefs. And they hope that the newly elected Liberal government, voted in this month to replace the Conservative government, will be more receptive to changes to the proposed MPA. The Liberals have a history of instituting more environmentally sensitive policies than the Conservatives and have, for example, promised to reform the environmental assessment process for oil pipeline projects. “They’re certainly going to be more persuadable,” says Leys. “Really, you need complete no-take areas. But that’s not a popular perspective.”