On October 22, Bangladeshi and Indian officials were supposed to hold a ceremony laying the foundation stone for the Rampal power plant, a massive new coal-fired project that will sit on the edge of the Sundarbans, the world’s largest mangrove forest. Instead, the governments canceled the ceremony and announced that the project had already been inaugurated in early October by the two countries’ heads of state via a Skype call. While the governments say the change was made because of busy schedules, activists contend the sudden scuttling of the ceremony was more likely due to rising pressure against the coal plant, including a five-day march in September that attracted an estimated 20,000 people. 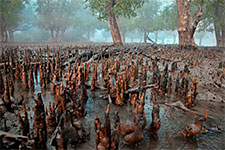 The Sundarbans lies 80 percent in Bangladesh and 20 percent in India. MOHAMMED RAKIBUL HASAN

Opponents say that the 1,320 megawatt project could devastate the Sundarbans, Bangladesh’s largest forest and the nation’s last stronghold of the Bengal tiger. They contend that water diversion to the plant, coupled with air and water pollution and heavy coal barge traffic, could leave the Sundarbans — a UNESCO World Heritage site — an increasingly degraded ecosystem, potentially threatening the livelihoods of some of the half-million people who depend on the great mangrove forest.

“Most of the impacts of [the plant] are negative and irreversible which can’t be mitigated in any way,” concludes an independent Environmental Impact Assessment of the proposed plant by environmental scientist Abdullah Harun Chowdhury of Khulna University in Bangladesh.

The government says that the plant will produce badly needed power for Bangladesh’s 150 million people, about half of whom lack electricity. Officials also contend that Rampal will cause minimal environmental harm. “[The] Sundarbans is our safeguard [against natural disasters], and no power plant will be set up jeopardizing the Sundarbans,” declared Monowar Islam, the head of Bangladesh’s Power Division.

The construction of the Rampal plant is part of an ambitious government strategy to increase electricity generation to 20,000 megawatts by 2021 — a goal that relies heavily on coal. The current administration of Prime Minister Sheikh Hasina is proposing a dozen new coal plants, with more likely to come. Until recently, less than five percent of Bangladesh’s electricity production came from coal. Instead the country produced most of its energy from natural gas and biomass.

Critics of the Rampal plant and the country’s growing embrace of coal argue that it is a reckless strategy for a nation that is consistently rated as one of most vulnerable countries to global warming. Few nations are as low-lying as Bangladesh, and the Sundarbans is one of the country’s most important bulwarks against rising seas and intensifying typhoons and other extreme weather events.

Based on sea level increase projections from the Intergovernmental Panel on Climate Change, 17 percent of Bangladesh could be engulfed by the sea as waters rise, creating millions of climate refugees. In 2010, Bangladesh’s Minister of the Environment and Forests, Hasan Mahmud, said that “in Bangladesh climate change is not a threat; climate change is the reality.” 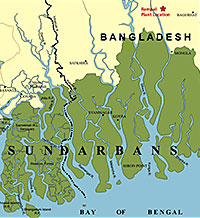 The Rampal power plant will be built near
the edge of the Sundarbans.

“Bangladesh is already a global hotspot for tropical cyclones and other climatic events and is highly vulnerable to increased intensity of storms,” Mahmud said last year. “Two thirds of the country is less than five meters above sea level and vulnerable to coastal inundation and salinity intrusion, which we are already experiencing.”

In 2009, Prime Minister Hasina told the U.N. climate summit in Copenhagen that “the refugees caused by climate change increase day by day.” Still, Hasina is a staunch defender of the Rampal coal plant, and her administration is the driving force behind Bangladesh’s sudden investment in coal.

First conceived in 2010, the Rampal power plant is a partnership between the Bangladesh Power Development Board and India’s state-owned National Thermal Power Corporation (NTPC), which will share fifty-fifty ownership of the plant, as well as the electricity it produces. Critics contend that despite being a joint project between India and Bangladesh, Bangladesh will face the environmental and human impacts.

“Coal is big business in India, and no doubt there are powerful interests at play,” says Ashish Fernandes, an expert on coal with Greenpeace India. “If Bangladesh is locked into a coal-dependent energy paradigm, companies like NTPC will make significant profits, at the cost of [Bangladesh’s] people and environment.”

Like the Rampal coal plant, the Sundarbans mangrove forest — an expanse of wooded tracts that rise out of sediment in the tidal zone — is shared between Bangladesh and India. Around 80 percent of the forest lies within Bangladesh, while the rest is in the Indian state of Bengal. The Sundarbans, a UNESCO World Heritage site, covers 10,000 square kilometers and is vital to locals who have depended on its fisheries and other bounty for centuries.

“[The Sundarbans] plays a significant role in the national economy and it is the largest source of forest products in the country,” explains Abu Diyan a local environmentalist and guide.

Roughly the size of Lebanon, the Sundarbans is home to at least 330 plant species, 315 bird species, 210 fish species, 49 mammal species, and 59 species of reptiles. Many of the species are endangered, including the Ganges river dolphin; the masked finfoot, a water bird; and the Bengal tiger. Globally, mangrove forests are among the world’s most important ecosystems — serving as fish nurseries, havens of biodiversity, and carbon storehouses — but they are increasingly disappearing in the face of coastal development and aquaculture.

‘Situating a coal plant near a unique and already stressed ecosystem is inexcusable,’ says an Indian activist.

The human toll of the coal plant — built just 14 kilometers (8.5 miles) from the edge of the Sundarbans — has already been felt: several hundred families have been forcibly removed to make way for the project and hundreds more are expected to be relocated in the near future. The land they inhabited, mostly shrimp farms and rice paddies, will soon be the scene of the power plant construction.

The government says the Rampal coal plant will suck up 9,150 cubic meters of water from the Passur River every hour and run it through a desalination plant. Since mangroves depend on a brackish mix of fresh and salt water, scientists not only fear that water levels in the Passur river will run low, but also that the blend of fresh-and-salt water could be disrupted, dooming swaths of the Sunderban’s mangroves. Furthermore, water dumped back into Passur River will be up 20 to 25 degrees F warmer than the river water, threatening aquatic species.

“The water of the Sundarbans and surrounding areas will be affected by discharging cooling water, effluents from the ships, and leaching water of the coal from ships,” Chowdhury explained in an interview. Experts say that the Rampal coal plant will require around 4.72 million tons of coal every year, which the government says will require a ship a day carrying coal through wildlife-rich waters.

Fewer than 2,500 Bengal tigers remain in the wild; about 270 live in the Sundarbans. STEVE WINTER/NATIONAL GEOGRAPHIC/PANTHERA.ORG

Another major concern is the air pollution and toxics generated by the plant, including arsenic, mercury, lead, nickel, and radium. The government says the plant could discharge up to 52,000 tons of sulfur a year, which, depending on the type of coal burned, could lead to acid rain in the Sundarbans and surrounding regions.

“While there is no ‘good’ location for a coal plant, situating one in or near a unique and already stressed ecosystem like the Sundarbans is inexcusable,” says Fernandes.

The government of Bangladesh, which did not respond to numerous requests from Yale Environment 360 for comment, has repeatedly argued that the coal plant will have little or no environmental impact. “[The Rampal coal plant] would be built using the latest ultra super critical technology, so it would not affect the environment of Sundarban,” Tawfiq-e-Elahi Chowdhury, an adviser to the Prime Minister, said in September.

He added that “the matter has to be understood with a scientific outlook, not emotion. [Opponents’] criticism is not based on information and technological knowledge. Our decision is based on real terms, and not emotions.”

According to a recent press note from the government, the plant will only burn “high-quality imported coal,” and “emissions of carbon, sulfur, fly ash and several other sorts of air pollution will be kept at a minimum level to avoid having any adverse impact on the environment.”

However, conservationists and some scientists have harshly criticized the government’s EIA for downplaying threats and spreading misinformation. For one thing, the government EIA treats the Sundarbans as a “residential and rural area” and not an “ecologically critical area.” That designation allows the government to impose lower thresholds for pollutants, including sulfur and nitrogen.

Conservationists argue that coal is not the best answer to Bangladesh’s shortage of electricity.

“It defies logic to treat the Sundarbans, the largest mangrove forest in the world … as a residential area,” economist Anu Muhammad with Jahangirnagar University told The Independent newspaper of Bangladesh.

Mowdud Rahman, an engineer with the Southeast Asia Renewable Energy People’s Assembly, says that the EIA process was “used as an instrument to rationalize a predetermined project.”

He and others say that coal is not the best answer to Bangladesh’s shortage of electricity. Increasing efficiency at existing gas plants could add 2,500 megawatts in one year — nearly double the electricity production of the Rampal coal plant, Rahman says. In addition, he says, Bangladesh should look to biogas, mini-hydroelectric, wind, and solar for its energy needs. Currently, the Bangladesh government has set a goal of producing 5 percent of its electricity with renewable energy by 2015 and 10 percent by 2020.

“Unfortunately this only seems to be a juicy target with no substantial attempt to make it happen,” says Rahman.

In September, concerned Bangladeshis took their opposition to the streets. At the end of the 400-kilometer march, activist leaders released the “Long March Declaration,” which demanded that the government cancel the project by October 11. Nevertheless, the project is moving ahead.