Ted Schuur has spent the better part of his career making the connection between climate change and wildfires that are burning an increasing amount of land in Alaska and in sub-Arctic and Arctic forests around the world. So the Northern Arizona University scientist wasn’t all that surprised this summer to find his field stations in the interior of Alaska surrounded by fires on three sides. At the time, the state was well on track to recording its second-worst fire season ever. 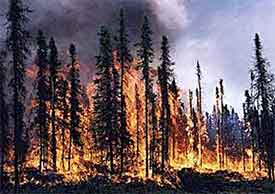 The surprise came in mid-summer when Schuur took a few days off from his research to attend a meeting in Colorado. He had hoped the trip would give him a break from Alaska’s noxious smoke. The smoke in Boulder, however, was so thick that the state’s Department of Public Health and Environment was advising parents with young children and people with heart disease and respiratory problems to limit their outdoor activities.

As Schuur soon learned, the pall of smoke in Denver had actually drifted down from a large number of forest fires in the Pacific Northwest and Canada. “I’ve never seen anything quite like this summer,” says Schuur. “It seemed like half the continent was on fire at one time or another.”

Schuur wasn’t exaggerating. In June, as many as 25,000 men and women were fighting thousands of wildfires that were burning out of control in states such as Alaska, Washington, California, and Idaho, and in the Canadian provinces of British Columbia, Alberta, and Saskatchewan. But as severe as the fire situation was this year in the Lower 48 and Canada, it was the really big fires in Alaska and Siberia that captured the attention of meteorologists and fire experts. Because of rapidly rising temperatures, and in some cases, inadequate or antiquated forest management practices, massive wildfires such as these are becoming increasingly common in the Arctic and sub-Arctic regions of the world, scientists say.

‘It seemed like half the continent was on fire at one time or another.’

Fire experts agree the situation will likely get much worse as rising temperatures, drier conditions, and increasing thunderstorms and lightning strikes lead to more fires burning even bigger, hotter, faster, and deeper into the ground than at any time in recorded history. According to the U.S. National Climate Assessment, the extent of area burned in Alaskan wildfires is projected to double by 2050 and triple by 2100 if greenhouse gas emissions are not quickly brought under control and runaway Arctic warming continues.

The largest fire on record in North America was the Chinchaga fire that raged in northern Canada for 222 days in 1950 and burned 3. 5 million hectares, or 8.6 million acres. But fire experts like Mike Flannigan of the University of Alberta say that we may see more than one fire burning in excess of 8 million acres in North America in the coming decades. “We’re headed into uncharted territory,” he says. “We’re exceeding thresholds all the time. We better start acting soon.”

The extent of area burned in Alaskan wildfires is projected to double by 2050 and triple by 2100.

The boreal forests of Alaska, the northwestern United States, Canada, Northern Europe, and Russia ring the treeless tundra regions south of the Arctic Circle and easily rival in size the rainforest regions of the world. Within this massive ecosystem — which comprises nearly 30 percent of global forest cover — thousands of rivers and lakes drain into a vast array of bogs, fens, and marshes. An estimated five billion land birds live or nest here.

Some scientists suggest that once the spruce and pines in the boreal forest burn, fire-resistant trees such as aspen will replace them. Flannigan, however, isn’t buying it. So long as there are higher temperatures, decreased precipitation, and more lightning strikes, he says, aspen will burn quite nicely. And once the aspen are gone, the shrubs that will replace them will also burn if they are dry enough.

Fire experts say that as wildfires increase in size and frequency, landscapes will be transformed, air quality will worsen, and wildlife as well as people living in rural settings will increasingly be put in harm’s way. Industry will also suffer, as tar sands operators in northern Alberta discovered this summer when fires interfered with their operations.

Several studies, including one published recently in the Proceedings of the National Academy of Sciences, say that boreal forests and Arctic regions are experiencing more extreme fires because of rising temperatures and changing precipitation patterns. For every degree of warming, there needs to be a 15 percent increase in precipitation to compensate for the moisture loss in the ground. For every degree of warming, however, lightning strikes increase while precipitation drops by about 10 percent. This happened in Alaska in June, when lightning ignited 50 fires a day for five days straight.

For every degree of warming, lightning strikes increase while precipitation drops by 10 percent.

“This is the most on record,” says Sharon Alden, weather program manager of fire-predictive services at the Alaska Interagency Coordination Center. “In 2004 there were only three days with more that 20 new [fire] starts and they were strewn out over the summer.”

With temperatures expected to rise by as much as 10 degrees F by the end of the century, boreal regions could see a 75 to 125 per cent increase in area burned, according to Flannigan. And with deciduous shrubs overwhelming grass and sedge cover on the tundra, Arctic tundra fires — such as the 2007 Anaktuvuk River fire, which accounted for more than half of all of the area that burned on Alaska’s North Slope since 1950 — will be more common, according to a recent report from the National Oceanic and Atmospheric Administration.

There is also the possibility, as Schuur suggests, that more of these fires will burn deep into northern peatlands, where they can smolder through the winter, potentially destroying seedlings and re-igniting once the snow melts in spring.

The prospect for bigger fires burning hotter and faster in the future is especially daunting when one looks at what happened in the 1950 Chinchaga fire. At one point, so much smoke filled the air over North America that flights in Canada and the United States had to be cancelled. In Buffalo, Pittsburgh, Cleveland, and many towns in New York state, it was so dark at mid-day that lights in baseball fields, including those at Yankee Stadium, had to be turned on. Smoke from the fire traveled all the way to Europe.

According to Flannigan and fire expert Cordy Tymstra, who recently wrote a book on the fire, Chinchaga changed the way we fight fires, which now heavily focuses on blazes that threaten people and infrastructure. But they also say that the time has come to rethink much of what we have learned since then because there will be many more fires, and more assets — small towns, oil fields, pipelines, and mines — in the line of fire when another huge blaze comes along. In many cases, traditional fire-suppression techniques will not be successful unless fire managers have maps and 3D models to determine how a fire will behave in a warmer world, and how that fire might affect ecological restoration if it is allowed to burn.

Larger and more frequent fires, logging, and disease are taking a significant toll on Siberian forests.

This is especially true in Siberia, where hundreds of people were killed or made ill by massive wildfires in 2012 and 2015.

There is a lack of reliable data to compare today’s high level of Siberian forest fires with the past, according to Dmitry Schepaschenko, a scientist with the Ecosystems Services and Management Program at the International Institute for Applied Systems Analysis in Austria. Heiko Baltzer, director of the Center for Landscape and Climate Research at the University of Leicester, is using remote sensing to measure and monitor fire and vegetation changes in Siberia’s boreal forest. While it is too early to say definitively that climatic warming is the cause of the vegetation changes — spruce replacing larch, and shrubs replacing spruce —Balzer says it is clear that larger and more frequent fires, logging, and disease are taking a significant toll on Siberian forests.

In the last two decades, officials in Colorado have watched as massive, months-long wildfires have become a regular occurrence in their state. A Yale Environment 360 video goes onto the front lines with Colorado firefighters who describe what it’s like to continuously confront deadly blazes fueled by a hotter, drier climate.WATCH THE VIDEO

Alexey Yaroshenko of Greenpeace Russia, says the situation in his country is even worse since the government began drastically reducing the number of people who were working in the forestry sector in 2006. Where there were once 200,000 people working on forest management and fire suppression in vast regions such as Siberia, there are now just 60,000, he says.

Sobering as future scenarios appear to be, Schuur suggests that an even more alarming development would take place if more fires begin to burn through layers of moss, leaves, and other organic materials that insulate permafrost from surface heat. That could release vast amounts of carbon, he points out, as there is twice as much carbon trapped in permafrost as in the atmosphere.

“As more and more of this carbon is released from the permafrost, temperatures are going to rise even faster,” he says. “Permafrost carbon may not be as visible as changes in sea ice, but you can bet that big changes are happening there and it’s going to have a big impact on the future.”

Correction, October 1, 2015: An earlier version of this story incorrectly stated that Colorado was among the states experiencing a large number of wildfires this June.