In the high desert of southern Spain, not far from Granada, the Mediterranean sun bounces off large arrays of precisely curved mirrors that cover an area as large as 70 soccer fields. These parabolic troughs follow the arc of the sun as it moves across the sky, concentrating the sun’s rays onto pipes filled with a synthetic oil that can be heated to 750 degrees Fahrenheit. That super-heated oil is used to boil water to power steam turbines, or to pump excess heat into vats of salts, turning them a molten, lava-like consistency.

The salts are just fertilizers — a mix of sodium and potassium nitrate — but they represent a significant advance in the decades-old technology of solar thermal power production, which has traditionally used mirrors to heat water or oil to generate electricity-producing steam. Now, engineers can use the molten salts to store the heat from solar radiation many hours after the sun goes down and then release it at will to drive turbines. That means solar thermal power can be used to generate electricity nearly round-the-clock.

The plant in southern Spain, known as Andasol 1, began operating last November and now provides 50 megawatts of power, enough electricity to supply 50,000 to 60,000 homes year-round. Andasol 2 will come online later this summer, with Andasol 3 already under construction. When the entire Andasol complex is completed in 2011, it is expected to generate enough electricity to power 150,000 households — about 600,000 people.

In the face of mounting concern about climate change, developing alternatives to coal and natural gas combustion has taken on a new urgency, and the construction of utility-scale solar thermal power plants in 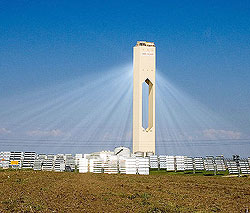 Wikimedia
At this 11-megawatt power tower outside Seville, Spain, sunlight reflects off 624 moveable mirrors to heat water pipes atop the 40-story tower, creating steam that drives a turbine.

deserts and arid areas is looking like an increasingly promising option. In the United States alone, solar thermal power projects are now being built near fast-growing centers of electricity consumption, such as Las Vegas, Los Angeles, and Phoenix. The first major solar thermal plant to be completed in decades, dubbed Nevada Solar One, started providing 64 megawatts of power to the neon lights of Las Vegas in 2007, although it lacks the latest molten-salt technology. Across the globe, utilities are currently building or planning solar thermal projects in North Africa, Spain, and Australia, among other regions.

Of course, solar thermal has been here before, experiencing a boom in the late 1970s and early 1980s. Its progress then was stalled by collapsing fossil fuel prices, as well as a lack of government support. Today, some critics of the technology fault it for taking up acreage in fragile deserts.

The case for solar thermal power hinges on economics. The sun bathes the Earth with an average of 6 kilowatt-hours of power per square meter over the course of a day, and a concentrated solar power plant like Andasol is the cheapest way to harvest a portion of that. Photovoltaics — semiconductor panels that convert sunlight to electricity — deliver power at roughly 40 cents per kilowatt-hour, while conventional solar thermal power plants can do so for around 13 cents per kilowatt hour, according to the U.S. National Renewable Energy Laboratory. This is only marginally more expensive than the average U.S. price for coal-generated electricity in 2008 of 11 cents per kilowatt hour. The cutting-edge technology of using molten salts to store solar-generated heat is considerably more expensive, but experts expect that price to fall steadily as the technology improves and is mass-produced.

Roughly 612,000 megawatt-hours of electricity from the sun were produced in 2007, according to the Energy Information Administration (EIA), and solar thermal collectors sufficient to cover more than 15 million square feet were shipped and ready for installation that year — more than double the amount in 1998.

In the United States, some 3,100 megawatts of solar thermal power are planned by 2012, and capacity worldwide is expected to reach 6,400 megawatts within 3 years — roughly 14 times the current amount. Still, electricity from the sun contributes just 1 percent of the renewable energy generated in the U.S., and all renewables taken together only provide 7 percent of U.S. energy needs.

Traditionally, solar thermal power plants have been built two ways — using trough-like mirrors to focus the sun’s heat on water or oil in nearby pipes, or using mirrors to focus solar radiation on a central spot, such as a liquid-filled “power tower.”

Using molten salts overcomes a drawback of solar energy generation — that when the sun sets, the lights go out.

Since 1984, vast arrays of curved mirrors have concentrated the sun’s rays on regimented lines of pipe filled with a synthetic oil at the Solar Energy Generating Systems (SEGS) power plant in the Mojave Desert of California. The SEGS plant was part of a brief boom in alternative energy projects in the late 1970s and early 1980s, when enthusiasm for the technology ran high in the wake of the first energy crisis. But the Reagan administration phased out research and development funding for solar thermal technology, as well as delaying tax credits that had driven the creation of projects like SEGS. Coupled with cheap fossil fuel prices in the late 1980s and 1990s, solar thermal power could not compete — although it still grew by roughly 4 percent a year from 1986 to 2000, according to the EIA.

Given its long operation record, developers are now copying SEGS and its parabolic trough collectors. In the U.S. alone, nearly 1,800 megawatts of such power plants are scheduled to be completed — mainly in the desert Southwest — by 2011, according to investment research from Friedman, Billings, Ramsey & Co.

Nor is the technology confined to the southwestern U.S.: Florida Power & Light will build a 75-megawatt solar thermal trough plant north of Miami. Hurricanes are not a major concern; Ausra’s chief scientist and founder, David Mills, notes that in testing their mirrors have withstood winds of more than 91 miles per hour.

But the most promising technology is one using molten salts, as it overcomes one of the chief traditional drawbacks of solar energy generation — that when the sun sets, the lights go out. The Andasol power plant uses more than 28,000 metric tons of sodium and potassium nitrates to store some of the sun’s heat for use at night or on a rainy day. The molten salts are stored in enormous hot and cold vats, able to be employed on command to soak up extra heat or drive the generation of electricity.

“The turbine is running more hours every day because we have storage and we have the possibility to plan our electricity production,” said Sven Moormann, a spokesman for Solar Millennium, the German company building Andasol.

“One of the great things about molten salt technology is that you can get more energy out of the same facility,” says Barbara Lockwood, manager for renewable energy at Arizona Public Services.

“We’re not going to solve the problem without putting large-scale, concentrated solar facilities in the American Southwest.”

But molten salts don’t have to be just used for storage, as they are at Andasol and will be at Solana. They can also be used directly as a fluid in solar thermal power plants that operate at a much higher temperature, replacing the synthetic oil or water used in power towers. In this variation of the solar thermal technology, large fields of mirrors concentrate the sun’s heat on a central tower that glows with intense light.

Such plants operate at more than 1,000 degrees Fahrenheit — closer to the temperatures employed at a coal-fired power plant — and therefore can use the salts directly as a heating medium. At night, when temperatures begin to drop, the cooling salts that have already transferred their heat to drive a turbine simply drain to the bottom of the tower, where they are stored in tanks, ready to be heated again the next sunny day.

Cheaper power towers that do not employ the molten salts are also being built: an 11-megawatt power tower that employs steam directly — built by Abengoa — now operates outside Seville, Spain. Southern California Edison has contracted for 1,300 megawatts of such direct steam solar thermal power towers with developer BrightSource.

Some utility-scale solar thermal projects have provoked opposition due to the large land area occupied by the arrays in Bakersfield, Los Angeles, San Diego, and elsewhere in California. But proponents of solar thermal power argue that the benefits of the carbon-free technology far outweigh any local impact.

“We’re not going to solve the [climate change] problem without putting large-scale concentrated solar facilities in the American Southwest,” SolarReserve’s Murphy says. “It doesn’t take that big a footprint to make a pretty big impact.”

In addition, there is another way to use this technology for capturing the sun’s heat — cleaning up existing fossil fuel-fired power plants or other operations that burn a lot of CO2-emitting fossil fuels.

By employing the mirrors of a solar thermal array to pre-heat steam, the amount of natural gas, oil, or coal that must be burned can be reduced. In fact, Ausra’s first installation boosted the efficiency of a coal-fired power plant in Australia by providing 9 megawatts of steam to the 2,000-megawatt Liddell Power Station. The company also hopes to work with some California oil producers that currently inject steam — generated by burning natural gas — into the old reservoirs to enable more oil to be pumped to the surface. Ausra argues that it can generate the same steam without any CO2 emissions by employing its solar thermal technology.

The Electric Power Research Institute, a utility-funded consortium, will study the potential of the technology to reduce fossil fuel-burning at power plants in Arizona, New Mexico, Nevada, and North Carolina.

“People need to look at this as a hedge against fossil fuel prices,” says Murphy. “You could start deploying a new type of power plant. We used to burn coal and natural gas — now we can use the sun to make steam.”