With the global push to reduce greenhouse gas emissions, it’s ironic that several energy- or resource-saving technologies aren’t being used to the fullest simply because we don’t have enough raw materials to make them. 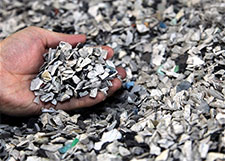 These bits of critical elements are bound for recycling at a Mitsubishi subsidiary in Japan. HARUYOSHI YAMAGUCHI/BLOOMBERG

For example, says Alex King, director of the new Critical Materials Institute, every wind farm has a few turbines standing idle because their fragile gearboxes have broken down. They can be fixed, of course, but that takes time — and meanwhile wind power isn’t being gathered. Now you can make a more reliable wind turbine that doesn’t need a gearbox at all, King points out, but you need a truckload of so-called “rare earth” metals to do it, and there simply isn’t the supply. Likewise, we could all be using next-generation fluorescent light bulbs that are twice as efficient as the current standard. But when the U.S. Department of Energy (DOE) tried to make that switch in 2009, companies like General Electric cried foul: they wouldn’t be able to get hold of enough rare earths to make the new bulbs.

The move toward new and better technologies — from smart phones to electric cars — means an ever-increasing demand for exotic metals that are scarce thanks to both geology and politics. Thin, cheap solar panels need tellurium, which makes up a scant 0.0000001 percent of the earth’s crust, making it three times rarer than gold. High-performance batteries need lithium, which is only easily extracted from briny pools in the Andes.

Platinum, needed as a catalyst in fuel cells that turn hydrogen into energy, comes almost exclusively from South Africa.

Researchers and industry workers alike woke with a shock to the problems caused by these dodgy supply chains in 2011, when the average price of “rare earths” — including terbium and europium, used in fluorescent bulbs; and neodymium, used in the powerful magnets that help to drive wind turbines and electric engines — shot up by as much as 750 percent in a year. The problem was that China, which controlled 97 percent of global rare earth production, had clamped down on trade. A solution was brokered and the price shock faded, but the threat of future supply problems for rare earths and other so-called “critical elements” still looms.

That’s why the Critical Materials Institute, located at the DOE’s Ames Laboratory, was created. The institute opened in June, and the official ribbon-cutting was in September. Its mission is to predict which materials are going to become problems next, work to improve supply chains, and try to invent alternative materials that don’t need so many critical elements in the first place. The institute is one of a handful of organizations worldwide trying to tackle the problem of critical elements, which organizations like the American Physical Society have been calling attention to for years. “It’s a hot topic in Europe right now,” says Olivier Vidal, coordinator of a European Commission project called ERA-MIN — one of a handful of European initiatives that are now ramping up.

Despite the high cost and high demand of metals critical for energy technologies, very little of this metal is recycled: In 2009, it was estimated that less than one percent of rare earth metals was recovered. Ruediger Kuehr, head of the Solving the E-waste Problem (StEP) initiative in Bonn, says that 49 million tons of e-waste are produced each year, from cell phones to refrigerators. Of that, perhaps 10 percent is recycled. It’s ridiculous to simply throw so much valuable material away, says Diran Apelian, founding director of the Metal Processing Institute in Worcester, Massachusetts. “There’s something like 32 tons of gold in all the world’s cell phones,” says Apelian. “There’s a huge goldmine in our urban landfills.”

A Belgian company now recycles 350,000 tons of e-waste a year, including photovoltaic cells.

Getting the metals out of modern technology is a pain, since they are incorporated in tiny amounts into increasingly-complex devices. A circa-2000 cell phone used about two dozen elements; a modern smart phone uses more than 60. “We’re making things more difficult for ourselves,” says King. Despite the relatively high concentrations of rare earths in technology, he says, it’s actually chemically easier to separate them from the surrounding material in simple rocks than in complicated phones.

But it is possible. The Brussels-based company Umicore is at the forefront of recycling technologies for critical metals, says King. At its site in Hoboken, Belgium, the company annually recycles about 350,000 tons of e-waste, including photovoltaic cells and computer circuit boards, to recover metals including tellurium. In 2011, Umicore started a venture to recycle rare earths from rechargeable metal hydride batteries (there’s about a gram of rare earths in a AAA battery) at its Antwerp site, in partnership with the French company Solvay. Likewise, the Japanese car-company Honda announced this March that it has developed its own in-house recycling program for metal hydride batteries — which the company plans to test using the cars damaged by Japan’s 2011 quake and tsunami. The Critical Materials Institute is developing a method that involves melting old magnets in liquid magnesium to tease rare earths out. “When it comes to recycling, anything is possible,” says Kuehr. “It’s a question of whether it’s economic.”

One of the hardest steps in e-waste recycling is simply getting the battery or other critical-metal-rich components out of the larger device or machine. This is a menial but intricate task, which is often handed over to low-paid workers in places like China or Nigeria. In the Guiyu area of southern China, for example, more than 100,000 people work to take apart e-waste, boiling up circuit boards to remove the plastic and then leaching the metals with acid, at great risk to the environment and themselves. Uncontrolled burning leads to contaminated groundwater, and one study found elevated levels of lead in children living in Guiyu. Japan is at the forefront of efforts to automate these processes so they can be done economically and safely by machines, says King.

The onus has to be put on the manufacturers to recover and recycle their own products, one researcher notes.

Even more important than technology, says Apelian, is policy and education. In a study of the U.S. recycling rates of about 20 products, from plastic to metal, the one with the highest rate of recovery is lead-acid batteries, used primarily in cars. Their recovery rate is 98 percent, compared to about 50 percent for aluminum cans. The reason, Apelian says, is because the government, worried about the lead, gives car companies a financial incentive to recycle the batteries themselves.

The onus, Apelian says, has to be put on the manufacturers to recover and recycle their own products, so they make them easier to re-use or break apart in the first place. “We need to manufacture for recovery. That’s almost non-existent.”

Recycling is perhaps the best route forward for elements where demand is expected to level off in the long run. Demand for terbium and europium, for example, will likely fade as fluorescent bulbs are eventually replaced with much smaller LEDs. But for other elements, like neodymium, this can’t be the only solution. “Right now we need tiny amounts of neodymium, for the ear-buds of your smartphone,” says King. “But for a high-performance wind turbine you need about two tons.”

For elements where demand is expected to increase, one option is to open new mines. China currently dominates rare earth mining — in part, notes a 2011 American Physical Society report, because more relaxed environmental standards about land reclamation make it cheaper. But resources exist elsewhere. There are about 450 potential rare earth mines being looked at around the world, according to King. A few are fairly advanced. The rare-earth division of Mountain Pass mine in California reopened this year, after being driven out of business by China in 2002. Despite some initial disappointments in production capacity, King thinks that venture will succeed. Likewise, the Mount Weld mine for rare earths in Australia is ramping up. These efforts, among others, have reduced China’s production share from 97 percent to about 90 percent in the past year or two, says King.

One approach is to find alternative materials that don’t need so many critical elements.

It can be difficult to develop economies of scale when dealing with materials only used in tiny amounts. Global demand for tellurium in 2009, for example, was just 200 metric tons. All of that came as a by-product from copper or gold mining. Though tellurium is extremely valuable at $145 per kilogram, the tiny amounts hardly make a blip in the profit sheets of these mining companies. “They have to be dragged into production kicking and screaming,” says King.

Another option is to make the mining processes more efficient. For rare earths, says King, mining companies basically grind up the rock, throw it in water, and blow bubbles through it: The rare-earth-bearing minerals tend to float and can be skimmed off the top. But this only captures about 65 percent of the rare earths in an ore, says King. His institute is now using DOE supercomputers to search for molecules that might bind to the elements and help them to float. “If we can invent a fairy dust to sprinkle into the water to make that go from 65 percent to 75 percent, you instantly boost rare earth production without opening a new mine,” says King. He hopes this strategy will succeed within a year or two.

The mining of rare earth metals, used in everything from smart phones to wind turbines, has long been dominated by China. But as mining spreads to countries like Malaysia and Brazil, scientists warn of the dangers of the toxic and radioactive waste their mining and processing generates. READ MORE

A final approach is to find alternative materials that don’t need so many critical elements in the first place. This is a demanding task. “The rare earths are kind of magic,” says King, in terms of their properties. They are a critical ingredient in magnets, for example, because of the way they wrangle the strong but unruly magnetic properties of iron — a task that no other element seems able to do. Research efforts attempting to make even stronger magnets without any rare earths are considered a long shot. But, says King, “We might not get them all out, but we can get the most expensive and rarest [rare earths] out.”

King remains optimistic. Struggles with limited resources go way back, he notes. The Bronze Age, some 2,000 years ago, caused copper supplies to run dry. In response, King says, the ancients recycled bronze, looked for new mines, and spent 200 years optimizing the more-available but less-ideal alternative — iron — to do the same job. The solutions today are the same, though hopefully finding suitable replacements won’t take so long. “It doesn’t take us 200 years anymore,” says King. “We’re shooting for two.”