It seems like the ultimate in green technology for an emissions-savvy citizen of the 21st century: solar panels on your roof, providing carbon dioxide-free electricity whenever the sun is shining. But as huge utility-scale solar and wind projects continue to make news and the economy continues to struggle, the state of the residential solar sector in the United States remains decidedly mixed.

From the first quarter of 2010 to the fourth quarter, installations of U.S. residential solar systems rose from 62 megawatts to 74 megawatts (enough to power about 15,000 homes), and the Solar Energy Industries Association reports that the first quarter of 2011 saw similar gains over the same period in 2010. Considering that the total installed solar capacity in the U.S. — residential, commercial, and industrial-scale of all types included — still hasn’t cracked 3,000 megawatts (enough to power roughly 600,000 homes), this feels like progress.

Prices of solar panels are steadily coming down, but are still not low enough to prompt a mass movement to solar.

Yet if you look at residential solar’s share of the total U.S. solar market, the picture is less bright. In 2009, 36 percent of all installed solar systems were on homes; this dropped to 30 percent in 2010, and some experts think thatwill continue to fall.

“The way the U.S. solar market is really headed is toward utility projects,” said MJ Shiao, a solar markets analyst with Greentech Media Research. He noted that the growth from the first quarter of 2010 to 2011 was about 14 percent in the residential market, compared with an impressive 119 percent for non-residential sectors. Just last week, the U.S. Interior Department approved First Solar’s 4,100-acre solar project in the California desert, which is expected to generate enough electricity to power 165,000 homes.

“These other market sectors are really taking off,” Shiao said. “That’s not to say that residential isn’t growing. It’s sort of plodding along.”

The primary issue stopping most U.S. homeowners from putting solar panels on their roofs is cost. Solar systems are expensive — on the order of $20,000 to $25,000 or more, depending on the system’s size and other factors. And even though these systems can end up paying for themselves in the long run with lower electricity bills, most families cannot find tens of thousands of dollars for the upfront costs. Prices of solar panels are steadily coming down, but are still not low enough to prompt a mass movement to solar, especially at a time of economic stagnation. 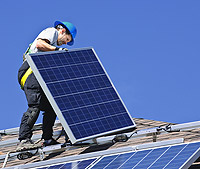 Elena Elisseeva/Shutterstock
In 2009, 36 percent of all installed solar systems were on homes; this dropped to 30 percent in 2010.

Because of this, the main drivers of residential solar installations are state and federal incentives that help defray those costs, yet even these are in jeopardy as governments at all levels slash budgets. Everyone in the country can take advantage of a federal renewable energy tax credit; this reduces the costs of a solar installation by 30 percent, and since 2009 there is no maximum on the total amount. Beyond that, several states dominate the market because their incentives are so strong.

The California Solar Initiative has helped make the country’s biggest state also the biggest residential solar market. So far, more than 50,000 installed systems have a total capacity of more than 240 megawatts; another 10,000 applications are waiting to add another 50 megawatts to the total. The initiative allows homeowners an upfront rebate based on how many installed megawatts the state has — the idea being that as the market takes off and as costs of solar drop, people will need less government help to prosper and the rebate will drop in value. At the moment, the initiative is in step 8 out of 10, meaning that a residential system can get back 35 cents per watt; this is down from $2.50 per watt when the program began. A typical installation ranges from two to 10 kilowatts, meaning the rebate can be upward of $2,000.

The unanswered question is whether solar can thrive without strong state and federal financial incentives.

While California matches its sunny reputation with a relatively strong solar market, other states have emerged as less likely solar powerhouses. New Jersey trails only California in total installed solar power, and as of late July the state surpassed 10,000 total installed solar arrays. The bulk of the market is for commercial-sized projects, like a giant 9 megawatt array on the roof of the Gloucester Marine Terminal, but state policies have also pushed residential solar. However, under Gov. Chris Christie, New Jersey ended its upfront rebate program last year, although it still offers ongoing incentives through the Solar Renewable Energy Certificates program. Christie also abandoned the previous administration’s goal of getting 30 percent of the state’s power from renewable sources by 2020, reducing that target to 22.5 percent.

Looking a few years out, the federal 30 percent tax credit for commercial solar projects will drop to 10 percent in 2016, and may disappear altogether for residential projects. The unanswered question is whether the solar industry can thrive without such strong federal and state financial incentives.

Some experts, though, don’t think the incentives are the only driver of the residential solar market. According to Michael Woodhouse, an analyst with the National Renewal Energy Laboratory, the economics of solar photovoltaics are better than many make them out to be.

“When people say PV will never compete without subsidies, that is like fingernails on a chalkboard to me,” Woodhouse said. “That’s a really incomplete picture.” The key, he said, is to look at the cost of electricity on a regional and state level rather than overall. Woodhouse has conducted analyses of several specific locales. For example, in Santa Barbara, California, he said that right now, when the 30 percent federal tax credit for solar is included, residential solar power costs about 13.8 cents per kilowatt-hour. The average price of electricity across the state, meanwhile — meaning, from all sources — is 15.1 cents per kilowatt-hour. In other words, solar power might already have achieved “grid parity” in Santa Barbara.

In other places, solar power is not close to grid parity. In St. Louis, Missouri, the cost of residential solar power is more than double the 8-cent per kilowatt-hour average of traditional electricity sources.

“The best economics for PV are in places where you have a good solar resource and expensive traditional electricity,” Woodhouse said. “There is no simple answer for this: when will PV compete with fossil fuels? It already does, it just depends on where we’re talking about.”

The most promising trend in residential solar power is the third-party ownership model.

For one subset of the population, there is a way around at least some of the upfront costs involved with a home installation: install it yourself. In recent years, do-it-yourself solar has begun to go mainstream, with stores like Home Depot now selling solar installation kits. At Lowes, a package of 13 185-watt panels (enough for a small 2.4 kilowatt system) and all the hardware required to install them costs $9,219.

On the other end of the spectrum from the do-it-yourselfer lie people who would like to have solar panels on a roof in theory, but don’t want to pay for them, install them, or even have the responsibility of owning them at all. Enter the most promising trend in residential solar power: the third party ownership model.

Adam Shuster of Ashland, Massachusetts took advantage of this model, under which a company installs, maintains, and owns a home’s panels and charges a fixed rate for the electricity they generate. In 2008, Shuster looked into putting solar panels on his family home’s roof, but decided it simply cost too much. But his ten-year-old son, Kenny, kept pushing him to look a bit harder.

“At one point I said to [Kenny], ‘You know, it could look kind of ugly on the house,’” Shuster recalled. Kenny countered: “Would you rather have an ugly planet and a good-looking house, or a good-looking planet and an ugly house?” In September 2009, the ten-year-old got to flip the switch that turned on a 20-panel, five-kilowatt photovoltaic system. His family is now generating about a third of its home’s power needs from the sun, saving about $75 per year on total electricity bills, and producing a third less carbon emissions as a result.

Several companies — notably SunRun, Sungevity, and Solar City — now will install a solar system on a homeowner’s roof for little or no upfront cost. The homeowner pays a set price to the installing company for the electricity the system generates, and the company also takes care of maintenance and repair.

Susan Wise, a spokesperson for SunRun, said her company grew at 300 percent in 2010 and expects to at least double again in 2011; she says that they now install $1 million of solar panels every day. “We let homeowners switch to solar without having to put thousands of dollars up front,” she said. “And they don’t have to deal with owning the technology. That’s a huge thing for lots of people. They don’t want the panels, they just want power.”

Though SunRun’s installations rarely are big enough to produce all of a home’s electricity, Wise said, the price of the solar portion of a home’s power tends to be five to ten percent lower than the utility’s portion at the start of the contract. Also, the third-party owners offer 18- and 20-year contracts with a locked-in price. Since utility electricity rates historically have risen consistently, a homeowner could save thousands of dollars over the life of a contract.

This corner of the market seems to be the fastest growing. Shiao of GTM Research said that in January of 2010, none of the solar installations in Colorado — which is among the top states for total solar installations — were third-party owned; only a year later, third party ownership accounted for 35 percent of the solar arrays installed. Notably, though, these companies rely on federal and state incentives, as well, and tend to follow the money to certain states. SunRun currently installs systems in nine states; Sungevity is in eight.

Another promising long-term trend for residential solar is that solar panels continue to drop in cost, and fairly drastically. Woodhouse said that in 2008, the price of a manufacturing a solar panel was about $4 per watt. Now, $1.50 per watt or below isn’t out of the question.

“The cost reductions in PV are really remarkable,” he said. “And there is every reason to believe that they will continue. We’re not even close to hitting the bottom of cost reduction potential.”